PORT-AU-PRINCE, Haiti (AFP) — Haiti has asked Washington and the UN for troops to secure its ports, airport and other strategic sites after the assassination of president Jovenel Moise opened a power vacuum in the crisis-hit Caribbean nation, an official said Friday.

The United States has already said it will send FBI and other agents to Port-au-Prince, two days after Moise was shot dead in his home.

In the wake of the slaying “we thought that mercenaries could destroy some infrastructure to create chaos … During a conversation with the US secretary of state and the UN we made this request,” elections minister Mathias Pierre told AFP.

The US State Department and Pentagon both confirmed receiving a request for “security and investigative assistance” and said officials remain in contact with Port-au-Prince, but did not specify whether military troops would be deployed.

The UN did not immediately respond to a request for comment. A UN diplomatic source had earlier indicated that a Security Council resolution was needed to do as the Haitians had asked.

Washington had already signaled its willingness to help the Haitian investigation, and White House spokeswoman Jen Psaki added Friday that senior FBI and other officials would be heading to the Caribbean as soon as possible.

Debris litters a street caused by a flood of water brought on by heavy rains that fell over Port-au-Prince, Haiti, July 9, 2021, two days after Haitian President Jovenel Moise was assassinated in his home. (AP Photo/Fernando Llano)

The development came as questions swirled about who could have masterminded the audacious assassination, with most members of an alleged hit squad of Colombians and Americans either dead or in custody, and no clear motive made public.

Amid the uncertainty, three men are being touted as potential leaders of the nation of 11 million people, more than half of whom are under the age of 20. There is no working parliament.

After days of paralysis in the capital, Port-au-Prince saw the timid return of people to the streets, shops opening and the resumption of public transport on Friday morning — but under a pall of apprehension. 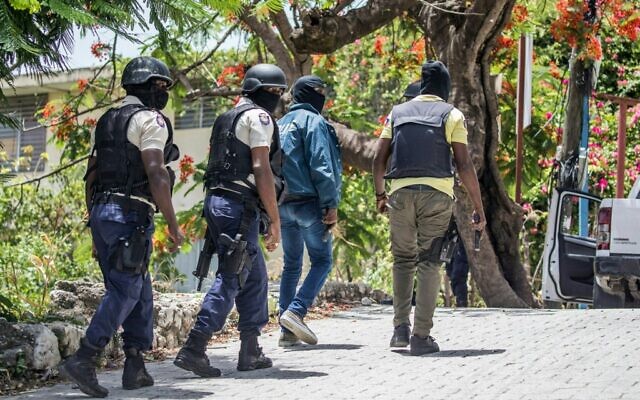 Police are on the lookout for others suspected assassins of Haitian President Jovenel Moise outside the Embassy of Taiwan in Port-au-Prince, Haiti on July 9, 2021 (Valerie Baeriswyl / AFP)

People scrambled to stockpile basic necessities at supermarkets and queued to buy propane for cooking in anticipation of more instability.

“I don’t know what’s going to happen tomorrow or the day after … I am preparing for bad days ahead,” Port-au-Prince resident Marjory told AFP, as she and her husband stocked up on supplies at a store.

The city’s airport, shuttered after the attack, appeared to have reopened, according to Flightradar data.

As the shock of the killing wore off, many in the poorest country in the Americas were demanding answers.

“Foreigners came to the country to perpetrate this crime. We, Haitians, are appalled,” a resident of the capital told AFP.

“We need to know who is behind this,” he added.

Police have said a 28-member hit squad of Colombians and Americans had carried out the attack, but that they were still seeking its masterminds.

Moise’s security team are in the hot seat and have been summoned to appear before the courts. 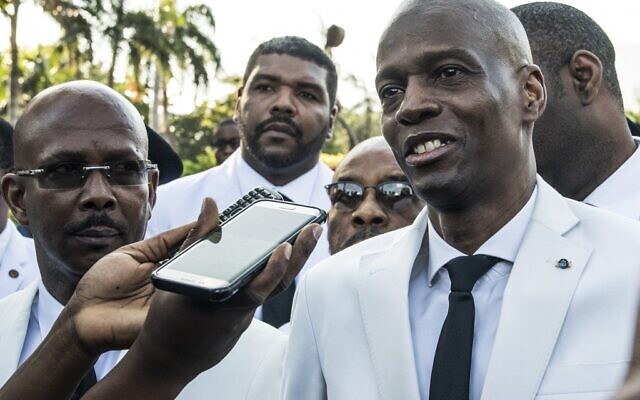 Others have speculated on the possible involvement of security agents in the killing, adding to the confusion.

“The president of the Republic, Jovenel Moise, was assassinated by his security agents,” former Haitian senator Steven Benoit said on Magik9 radio Friday.

“It is not Colombians who killed him. They were contracted by the Haitian state.”

One of Moise’s last acts as president on Monday was to appoint a new prime minister, Ariel Henry. He had not taken office when Moise was killed.

Hours after the assassination, Henry’s predecessor Claude Joseph said he was in charge.

While the opposition has accused Joseph of power-grabbing, the United Nations has said he had authority because Henry had not been sworn in. 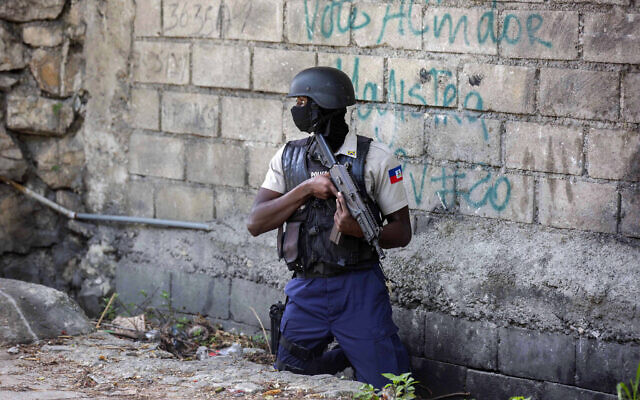 Police search the Morne Calvaire district of Petion Ville for suspects who remain at large in the murder of Haitian President Jovenel Moise in Port-au-Prince, Haiti, July 9, 2021 (AP Photo/Joseph Odelyn)

In an attempt to emerge from what it called an “institutional and political vacuum,” the Senate voted on a resolution to make Senator Joseph Lambert the provisional president.

But the announcement is non-binding. While it does have some support among opposition politicians, not enough senators are currently in office to legally pass the resolution.

Haiti was already in the midst of an institutional crisis before the assassination.

Moise had not organized an election since he came to power in early 2017 and the country has had no parliament since January 2020. Moise had been ruling by decree.

Some alleged attackers, including both Americans, have been arrested. Three have been killed, and at least five are still on the run, officers said Friday.

The United States has said it is aware of the arrest of US citizens but declined further comment.

Colombia on Friday said 17 Colombian ex-soldiers were thought to have been involved, and that it will collaborate on the investigation.