The Hamas terror group used heavy earth-moving equipment Friday to dig up the bodies of its fighters who were killed during the IDF’s bombing of the terror group’s “metro” tunnel system, used for transferring weapons and operatives during Operation Guardian of the Walls.

Aerial footage showed a digger in use to clear the area and extract a body.

The Haaretz daily reported that the bodies of nine members of Hamas’ military wing, the Iz ad-Din al-Qassam Brigades, were pulled out of a collapsed tunnel east of Khan Younis.

The newspaper cited Gazan reports saying that the nine terrorists were killed on May 11 but the extraction of their bodies was delayed by the fighting.

Thousands then attended a joint funeral for the nine terrorists in Khan Younis.

Prime Minister Benjamin Netanyahu said Friday that Israel fulfilled its objective to deal Hamas a “blow it cannot imagine” by destroying the terror tunnel network it built in Gaza, adding that the military turned it into a “death trap.”

Palestinians carry the bodies of members of the Iz ad-Din al-Qassam Brigades, the armed wing of the Hamas terror group who died in Israeli bombardment of a tunnel, during their funeral in Khan Younis, in the southern Gaza Strip, on May 21, 2021. (SAID KHATIB / AFP)

The prime minister also said that although the terror group wanted to carry out many cross-border attacks through the tunnels — including at the tail-end of the operation — it was thwarted by Israel’s subterranean barrier, which detected and “destroyed” the terrorists. 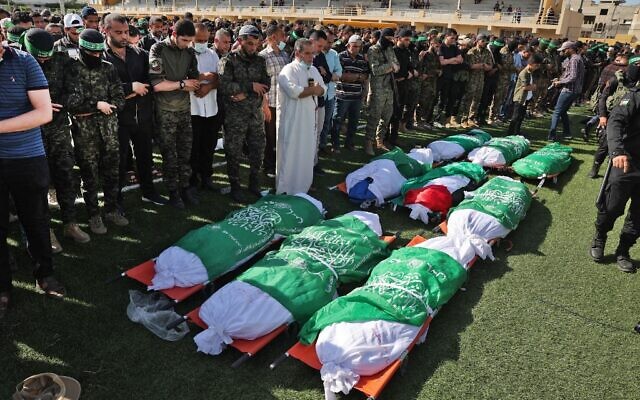 Palestinians pray by the bodies of members of the Iz ad-Din al-Qassam Brigades, the armed wing of the Hamas terror group who died in Israeli bombardment of a tunnel, during their funeral in Khan Younis, in the southern Gaza Strip, on May 21, 2021. (SAID KHATIB / AFP)

It could take weeks before the bodies of all the Gaza dead are pulled out of the rubble, Haaretz reported.

In total, Israeli strikes killed 248 people including 66 children and teens since May 10, and wounded 1,948 others, the Hamas-run Gaza Health Ministry has said.

Prime Minister Benjamin Netanyahu said Friday that Israel killed over 200 terrorists in Gaza, including 25 senior officials. The IDF also says some of the Gaza civilian fatalities were killed by the terror groups’ own rockets falling short and exploding in the Strip.

Large areas have been flattened and some 120,000 people have been displaced, according to Hamas.

The Israeli army said Gaza terrorists fired more than 4,300 rockets towards Israel, of which 90 percent were intercepted by its Iron Dome missile defense system.

The rockets killed 12 in Israel, including one child, a teenager and an Israeli soldier, with one Indian and two Thai nationals among those killed, Israeli authorities say. Some 357 people in Israel were wounded.

A major factor in the tensions that preceded Hamas’s rocket fire at Jerusalem on May 10, at the start of the 11-day conflict was friction at the Temple Mount holy site, with Israeli security forces entering the compound and clashing with Palestinian rioters. 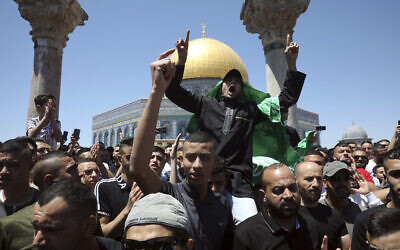 A Muslim worshipper wears a Hamas flag during a protest following Friday prayers at the Dome of the Rock on the Temple Mount in the Old City of Jerusalem, May 14, 2021. (AP Photo/Mahmoud Illean)

The Temple Mount is the holiest site in Judaism, as the site of both biblical temples. It is holy to Muslims as the site of the third holiest shrine in Islam, the Al-Aqsa Mosque.

As the fragile ceasefire appeared to hold on Friday, the site again saw clashes, but an unsourced Channel 13 report said that Jews would again be allowed to visit the compound in the coming days.

Jews are usually allowed to visit the site on certain hours on weekdays, under numerous restrictions, but not to pray there.