As Israel and Hamas hold indirect talks on the return of Israelis and Israeli bodies held by the Gaza-based terror group, Al-Jazeera on Sunday aired new footage of former Israeli soldier Gilad Shalit from his time in Hamas captivity, as well as audio of a person purporting to be an Israeli currently held by Hamas.

The video footage shows Shalit, who was held by Hamas between 2006-2011 after being abducted in a border attack, in daily activities that include working out, getting a shave, tying his shoelaces and playing with a ball in his cell.

The report also included audio of an unidentified person who self-identifies as “an Israeli soldier,” who says he is being held by the terror group and who wonders “whether the leaders of the country think of its captured soldiers and are concerned with their release.”

He adds that “I die every day anew” and says he hopes to soon be with his family. “Please help,” he says.

Hamas is currently holding the bodies of two soldiers, Hadar Goldin and Oron Shaul, as well as two Israeli civilians believed to be alive — Hisham al-Sayed and Avera Mengistu.

According to Channel 12, defense officials were attempting to ascertain whether the man heard in the recording was Mengistu. However, Israel’s government coordinator for prisoners and missing persons Yaron Blum dismissed the release of the footage as a “cheap manipulation by Hamas.”

Blum said Israel is “fully aware” of the condition of the fallen soldiers and of the two civilian captives. Hamas has in the past tried to insinuate that the soldiers could be alive.

Mengistu’s family also said that the voice did not appear to be his. “We could not recognize the voice, it doesn’t sound like Avera,” a representative told the Ynet news site.

The report also included Hamas men allegedly involved in Shalit’s capture during the summer of 2006, who describe how they attacked his tank near the border and how he surrendered to them.

Israel has insisted that the rehabilitation of the Gaza Strip following last month’s conflict be tied directly to the return of the captured Israelis. Egypt is mediating between the sides.

On Friday an unnamed defense official told Walla news that indirect negotiations are being delayed by the political uncertainty in the Jewish state.

The official told the news website that Egyptian-mediated talks “haven’t stopped,” but that the potential change of government was causing them to lag. 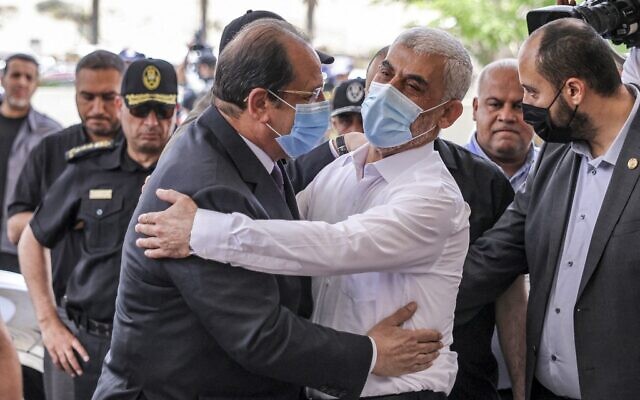 Sinwar made his comment following a meeting with Egyptian intelligence chief Abbas Kamel. The Egyptian top spy visited the coastal enclave after a series of meetings in Tel Aviv and Ramallah with senior Israeli and Palestinian officials.

Israel and Hamas concluded 11 days of fighting earlier this month during which the terror group launched thousands of rockets at Israeli cities and towns, and Israel launched hundreds of airstrikes in the Gaza Strip.

The last major prisoner exchange between Israel and Hamas was in 2011. In a controversial move, Prime Minister Benjamin Netanyahu authorized the release of 1,027 Palestinian security prisoners in exchange for captive soldier Shalit.

One of the prisoners released in the exchange was Sinwar, who had been sentenced to life in an Israeli jail for murder. He played a key role in the Shalit negotiations, with one of the Israeli negotiators later saying: “At [Sinwar’s] will, there would be a deal, and at his will, there would be no deal.”

Hamas has consistently said it rejects linking rebuilding Gaza after the recent hostilities to a deal with Israel on the captives.