The Gaza Strip began its coronavirus vaccination drive on Monday following the arrival of the first vaccines to the enclave ruled by the Hamas terror group.

Former health ministers and several medical workers were inoculated with Russia’s Sputnik V jabs in front of dozens of cameras. More medical workers and patients with chronic diseases are to start receiving injections on Tuesday.

The inoculation drive “will result in more immunity among the people and further curb the spread of the pandemic,” said Hamas-run Health Ministry spokesman Ashraf al-Qidra.

The enclave has received just 22,000 doses of vaccines, a tiny fraction of what is needed to immunize the Strip’s two million people, of whom some 1.4 million are over age 18.

Palestinian workers unload a truck from 20,000 doses of Russian-made Sputnik V vaccine upon its arrival to Gaza Strip, at the Rafah crossing border with Egypt, February 21, 2021. (AP Photo/Khalil Hamra)

The shortage of vaccines in both the Gaza Strip and the West Bank stands in stark contrast to Israel, which is on pace to immunize almost all of its adult population in the coming weeks. Already, roughly one-third of Israel’s 9.3 million people have received two doses of the Pfizer-BionTech vaccine.

Israel has offered vaccinations to all of its citizens, Jews and Arabs alike, in addition to Palestinian residents of East Jerusalem. But critics have faulted the Jewish state for not vaccinating the roughly five million Palestinians living in the Gaza Strip and the West Bank.

Critics of Israel’s vaccination policy point to the Fourth Geneva Convention, which states that an occupying power is required to provide vaccines to the inhabitants of the territories under its control.

Israel notes that it has pulled out of Gaza, though it maintains a blockade over the territory, which it says is necessary for its security. The Hamas terror group, which rules Gaza, is committed to the destruction of the Jewish state.

Israel also rejects the claim that it occupies the West Bank, saying the territories it has ruled since 1967 are “disputed,” rather than occupied.  As such, Jerusalem has never accepted the applicability of that international law statute to the territories.

The government points to the 1995 Oslo Accords, which stipulates that the Palestinian Authority is responsible for Palestinians living in the West Bank and Gaza, while both sides are to work together to combat epidemics.

The Palestinian Authority has struggled to secure vaccines, obtaining just 2,000 doses from Israel for West Bank medical workers and an additional 10,000 doses from Russia. Last week, it transferred 2,000 of the Russian vaccines to Gaza. 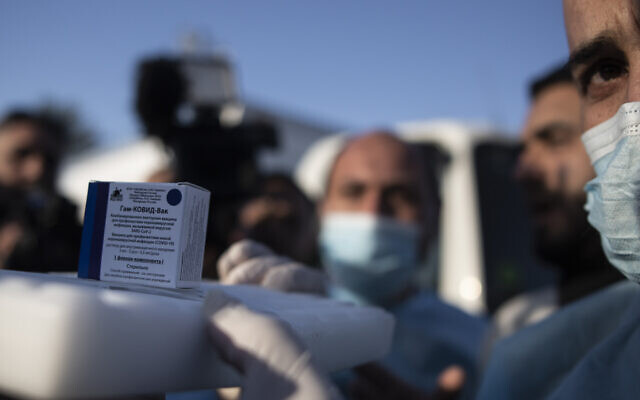 A Palestinian medic displays a box of one of 20,000 doses of Russian-made Sputnik V vaccine upon its arrival to Gaza Strip, at the Rafah crossing border with Egypt, February 21, 2021. (AP Photo/Khalil Hamra)

Ramallah is set to receive most of the immunizations acquired by the PA, although some others will head straight from Israeli ports to Gaza, World Health Organization envoy Gerald Rockenschaub told The Times of Israel on Monday.

On Sunday, Mohammad Dahlan, a rival of Palestinian Authority President Mahmoud Abbas, arranged a shipment of 20,000 Russian vaccines to Gaza from the United Arab Emirates in a move apparently aimed at embarrassing the Palestinian leader ahead of elections in May.

Gaza has been under an Israeli-Egyptian blockade since 2007 when Hamas expelled its rival Fatah following a bloody struggle for control of the coastal enclave. Israel has fought three wars against terror groups in the Strip since Hamas took control of the area, along with dozens of smaller exchanges of fire.

Nonetheless, the two rival Palestinian groups have pledged to coordinate on distributing the coronavirus vaccine in Gaza, and Hamas expects most of their vaccines to arrive from the PA.

Al-Qidra, the Health Ministry spokesman, said he expected more vaccines to arrive in Gaza in the coming days.