The Hamas and Islamic Jihad terror groups on Monday praised a “heroic” Palestinian stabbing attack near Jerusalem’s Central Bus Station that left two Israelis moderately wounded and said a recent rise in attacks was motivated by the strong feelings generated in Palestinian society by the escape of six security prisoners.

“The escalation of stabbings in occupied Jerusalem, the shootings, the increasing clashes of popular anger in the West Bank and the demonstrations in Gaza, come within the framework of the freedom uprising launched by our Palestinian people in solidarity with the heroic prisoners and confronting the arrogance of the occupation against them,” said Hamas spokesman Abdelatif al-Qanou.

“Acts of resistance are the legitimate right of the Palestinian people, and we bless and support this jihadist act,” said Islamic Jihad spokesperson Daoud Shehab.

Tensions have been running high across the West Bank over the past week, following the dramatic escape of the Palestinian prisoners from the high-security Gilboa Prison last Monday. Four of the six prisoners were recaptured by police over the weekend, but two remain at large, and security officials believe they may be hiding out in the West Bank and receiving assistance from Palestinians there.

Among the Palestinians, the fugitives have been widely regarded as “heroes” who succeeded in freeing themselves from multiple life sentences. In the Gaza Strip, as well as in the West Bank, Palestinians organized sit-ins and joyful gatherings to celebrate the prison break.

A protester flies a Palestinian flag and chants slogans next to burning tires during clashes with Israeli troops following a demonstration supporting Palestinian prisoners in Israeli jails, at the entrance of the West Bank city of Nablus, September 13, 2021. (AP Photo/Nasser Nasser)

News about the capture of four of the fugitives sparked several violent protests and a flurry of bitter social media posts expressing disappointment and shock.

There has been a rise in the number of violent incidents since the escape.

Monday’s attack, during which a suspected terrorist stabbed two people outside the Central Bus Station in Jerusalem before being shot by a police officer, came hours after an attempted attack in the West Bank, in which a Palestinian man tried to stab two IDF soldiers at a hitchhiking station, but was shot before he could inflict harm.

On Sunday, heavy gunfire was heard in the Jenin region in the northern West Bank, as Israeli security forces reportedly came under fire during the manhunt for the remaining two escaped prisoners.

Separately, on Friday afternoon, an assailant was shot, as he attempted to stab police officers in Jerusalem’s Old City, and later died of his wounds, police and hospital officials said. 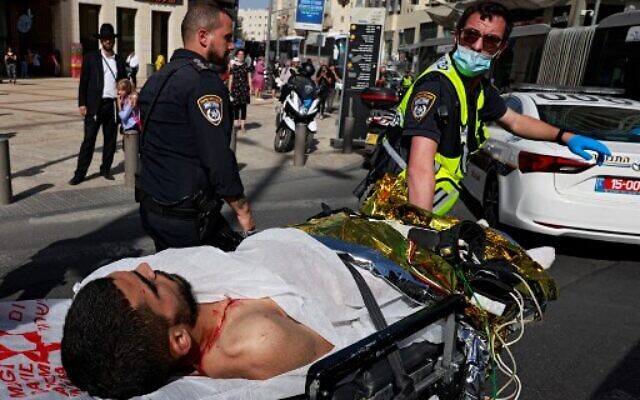 Jerusalem District Police Commander Doron Turgeman confirmed that the escapes had inspired more violence. “There is no doubt that there is an escalation,” he said.

‘He pushed him off and I shot him four times’

In the Jerusalem bus station attack  on Monday, two men were moderately wounded and taken to Shaare Zedek Medical Center. The hospital said the two were in stable condition and had suffered stab wounds to their upper bodies.

One of the wounded, Meir Navon, described the attack to Ynet.

Navon said he and a friend had entered a pharmacy when the suspect came in and asked one of the workers for something to drink. He then pulled out a knife and attacked them.

“He pulled out a meat knife, not a very large one, and stabbed my friend five times,” Navon said. “Then he came at me and managed to stab me in the back. I ran toward the store and he caught me by the suit and tried to stab me in the neck, head and back.” 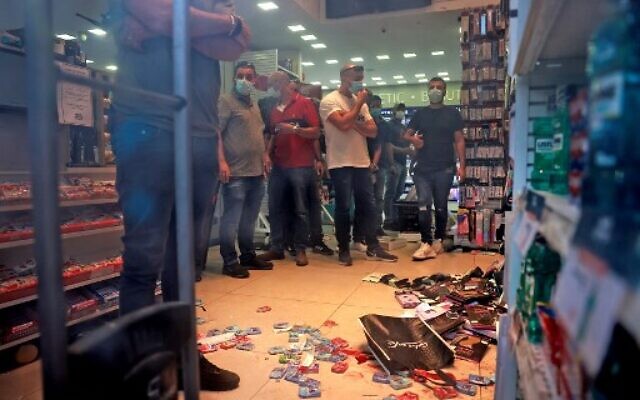 People gather around a trail of blood at the site of a stabbing attack, in Jerusalem on September 13, 2021.(Menahem KAHANA / AFP)

“I said to myself, I have to defend myself and I grabbed his throat and we fell together to the floor, where I grabbed his hand so he could not stab me anymore.”

The suspect was then shot and “neutralized” by a border police officer.

Turgeman said the suspect, whom he identified as a 17-year-old Palestinian from the Hebron area, was in serious condition. The assailant was named in media reports as Basil Shawamra, a resident of the town of Deir al-Asal al-Fauqa, near Hebron in the southern West Bank.

Tourgeman added that police detained two people near the bus station on suspicion of assisting the attacker and were searching for others. 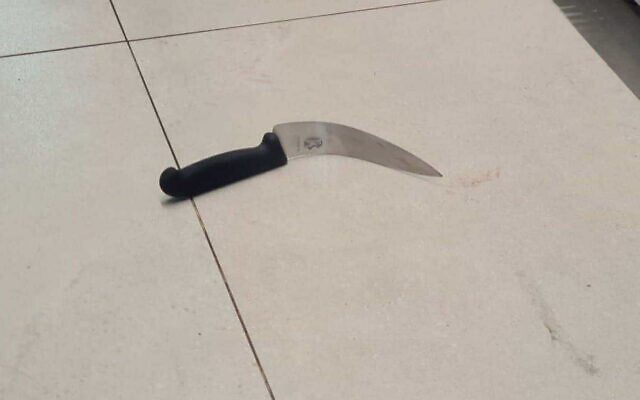 A knife used in a stabbing attack at the Jerusalem Central Bus Station on September 13, 2021. (Israel Police)

Speaking to Ynet, the unnamed policewoman described the incident.

“We saw crowds coming out, shouting,” she said. “I saw the terrorist struggling with a civilian, the knife in his hand.”

“One member of our patrol shot him with one bullet, but he kept on struggling. I told them not to fire again for fear of a friendly fire incident,” she said. “I shouted to the civilian to push him outside, he threw him off and I shot him four times.”

“Congratulations to the Border Police patrol that successfully stopped the attack at the Central Bus Station in Jerusalem,” Barlev wrote on Twitter. “A heroine who bravely strove for contact with the terrorist and handled the situation with professionalism, speed and sharpness.”