Hamas is ready for “immediate negotiations” to reach a prisoner exchange with Israel, the terror group’s Gaza ruler, Yahya Sinwar, said on Monday.

Sinwar made his comment following a meeting with Egyptian intelligence chief Abbas Kamel. The Egyptian top spy visited the coastal enclave after a series of meetings in Tel Aviv and Ramallah with senior Israeli and Palestinian officials.

Israel and Hamas concluded 11 days of fighting earlier this month during which the terror group launched thousands of rockets at Israeli cities and towns, and Israel launched hundreds of airstrikes in the Gaza Strip.

According to the Hamas-run Gaza Health Ministry, 253 Palestinians were killed during the fighting, including 66 children. Palestinian terror groups in Gaza have said 80 of the total casualties were combatants, though Israel says the true figure is higher. Thirteen Israelis, including a 5-year-old boy and a soldier, were killed.

Egyptian flags festooned the Gaza Strip to welcome Kamel, and Hamas authorities set up billboards and posters thanking Egyptian President Abdel-Fattah el-Sissi for his support, although Egypt has long sought to keep the terror group at arm’s length.

“The matter of prisoner exchanges saw some movement during the past period, but it came to a halt due to what [Israel] went through,” Sinwar said, a possible reference to Israel’s internal political turmoil and repeated elections.

The last major prisoner exchange between Israel and Hamas was in 2011. In a controversial move, Prime Minister Benjamin Netanyahu authorized the release of 1,027 Palestinian security prisoners in exchange for captive soldier Gilad Shalit.

One of the prisoners released in the exchange was Sinwar, who had been sentenced to life in Israeli jail for murder. He played a key role in the Shalit negotiations, with one of the Israeli negotiators later saying: “At [Sinwar’s] will, there would be a deal, and at his will, there would be no deal.”

It is unclear how many prisoners Hamas will demand in exchange for the two living Israelis and the two bodies. After Sinwar’s meeting with Kamel, the Hamas leader told reporters cryptically to “write down the number 1,111.”

“You will recall it well [in the future],” Sinwar said.

Israeli officials have said they will condition allowing the reconstruction of Gaza on progress in reaching a deal with Hamas that secures the return of the two captives and the two bodies.

But Hamas has consistently said it rejects linking rebuilding Gaza after the recent hostilities to a deal with Israel on the captives.

“We will not accept the prisoner file being tied to the reconstruction, or the siege, or Palestinian rights. Our brothers in Egypt understand this,” senior Hamas official Khalil al-Hayya, who serves as Sinwar’s deputy in the Gaza Strip, said Monday.

Al-Hayya accused Israel of “holding up” a possible ceasefire deal by not agreeing to the terror group’s conditions.

“The Israeli occupation is not serious at this point. If they were serious, they could have moved forward. We’re not the ones holding up [the issue],” al-Hayya claimed.

While an Egyptian-brokered ceasefire halted the fighting between Israel and Hamas, the truce remains tenuous. None of the underlying issues Hamas used as its rationale for attacking Israel have been resolved. 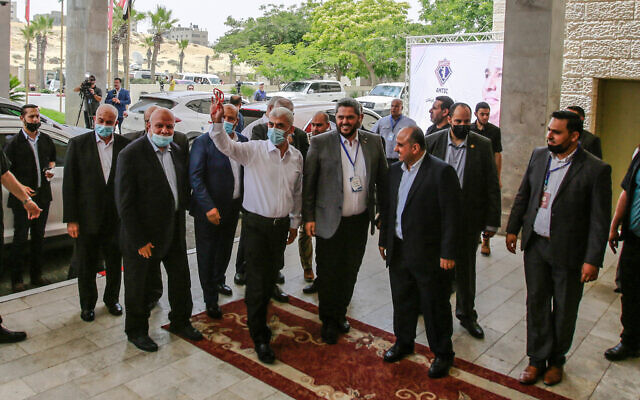 Yahya Sinwar, leader of the Palestinian Hamas movement meets with General Abbas Kamel, Egypt’s intelligence chief , as he arrives for a meeting with leaders of Hamas in Gaza City. Photo by Atia Mohammed/Flash90.

The fighting was touched off after Israeli police clashed with Palestinians at Jerusalem’s Temple Mount — the third holiest site in Islam and Judaism’s holiest site — on two occasions in early May.

Tensions were also running high in Jerusalem over the pending eviction of Palestinian families in East Jerusalem’s Sheikh Jarrah neighborhood.

Another point of contention is Israel and Egypt’s ongoing blockade of the Gaza Strip. Israel has maintained tight restrictions on the coastal enclave since 2006, a blockade it says is necessary to prevent a serious threat from Hamas, while rights groups lament the impact on Gaza’s civilian population.

Egypt has reportedly invited Israel, Hamas and the Palestinian Authority to talks in Cairo on a long-term ceasefire. Foreign Minister Gabi Ashkenazi visited the Egyptian capital on Sunday, and the diplomatic shuffle is likely to increase in the coming days.

Al-Hayya did not say what Hamas would demand in exchange for a long-term accord with Jerusalem. But he told reporters that Israel “must be required to stop its aggression in Gaza, Jerusalem, Sheikh Jarrah and all across Palestine.”

The Hamas official also said Israel must lift its blockade of the Gaza Strip, establish a Palestinian state, and resolve the problem of Palestinian refugees whose family fled or were expelled from their homes during Israel’s establishment in 1948.

“International decisions have been made in favor of a Palestinian state and refugees and so on. These must be implemented. Only then can calm and stability return,” Al-Hayya said.