Abbas told a meeting of the Palestinian leadership on Thursday night that he was delaying the first Palestinian elections in over 15 years. The 86-year-old Palestinian president has served by executive fiat since his mandate expired in 2009.

Anticipating the decision to postpone the vote, Hamas boycotted the meeting.

Hamas leader Yahya Sinwar (4th L) takes part in a rally as Palestinians call for a “Day of Rage” to protest Israel’s plan to annex parts of the West Bank, in Gaza City on July 1, 2020. (MAHMUD HAMS / AFP)

“We knew in advance that Fatah and the Palestinian Authority were going to disrupt the electoral process, due to other interests that have nothing to do with the issue of Jerusalem,” Hamas said late on Thursday night.

“The Fatah movement and the Palestinian president bear full responsibility for this decision and its consequences,” added the terror group that has ruled the Gaza Strip since ousting Fatah forces in 2007.

Abbas issued a formal decree ordering Palestinian elections in mid-January: a vote for the Palestinian legislature on May 22 and a Palestinian presidential election on July 31.

If they had come to fruition, the elections would have been the first national vote for the Palestinians in over 15 years. Most observers see the indefinite delay as, effectively, a cancellation.

The official rationale for the postponement — as provided by Abbas — was an alleged Israeli refusal to allow the Palestinians to vote in East Jerusalem. Israel regularly cracks down on PA activity in Jerusalem, where the Jewish state claims sovereignty.

Israel did not publicly say whether it would prevent the vote from taking place in the contested city. Palestinians see East Jerusalem as the capital of the state they one day hope to establish.

But both Abbas’s political opponents and independent analysts charged that the PA chairman was more concerned about the possibility of defeat — either by breakaway factions from his own Fatah movement or by Hamas. 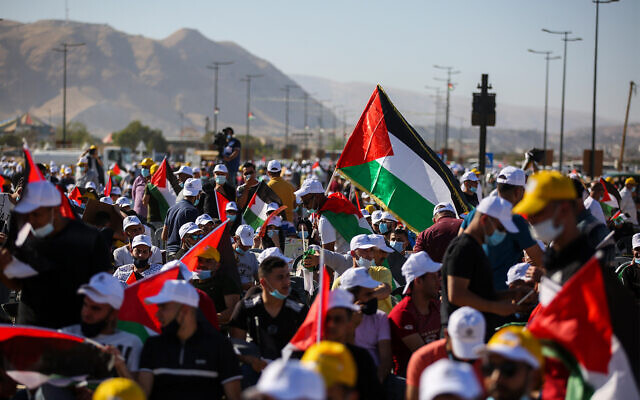 Thousands of Palestinians attend a rally against Israel’s plan to annex parts of the West Bank, in the West Bank city of Jericho, June 22, 2020. (Flash90)

Fatah split into three factions ahead of the upcoming elections — an official list of candidates backed by Abbas; a faction led by convicted Palestinian terrorist Marwan Barghouti; and another slate sponsored by former Fatah security official Mohammad Dahlan, who currently resides in Abu Dhabi.

Recent polling still gave Abbas’s list a quarter of the vote. But the two Fatah breakaway factions together took almost as much between them, which the enormously popular Barghouti’s faction taking 15 percent.

“Postponing elections is a huge setback that betrays the will of the people to hold elections. It also affirms the need for deep and wide change in the Palestinian political system,” Barghouti’s list of candidates wrote in a statement.

In the 2006 national legislative vote, Palestinians elected a parliament dominated by Hamas. The vote yielded a bloody civil war between the two factions, which ended with Hamas expelling Fatah from Gaza.

Since then, mutual distrust and fear of losing power has torpedoed every subsequent election push. The Palestinian leadership has promised a return to the ballot box on numerous occasions — only to see the promised elections fail to materialize.

Abbas defended his decision to postpone the elections as a patriotic stance — anything else, he said, would entail abandoning Jerusalem.

“Now, Israel is saying, ‘this isn’t yours, no matter what.’ What happened in 1996, 2005 and 2006, is one thing, and now is totally different,” Abbas said, referring to previous Palestinian elections. 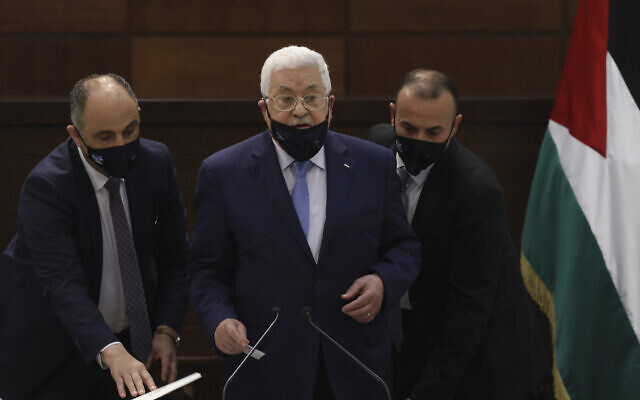 PA President Mahmoud Abbas attends a leadership meeting at his headquarters, in the West Bank city of Ramallah on September 3, 2020. (Alaa Badarneh/Pool Photo via AP)

But it is unclear how much the Palestinian public — most of whom, a recent survey showed, support holding the elections on time — believe their leaders’ justification.

Anticipation for the vote had been building across the West Bank and Gaza for months. Thirty-six lists were prepared to run in the parliamentary elections, and the campaign was set to officially begin this Friday.

Small, scattered demonstrations took place in Gaza and in Ramallah just before the decision was announced on Thursday night.