The Health Secretary, pictured leaving his London home this morning, confirmed ministers were ‘working on’ relaxing restrictions for double-jabbed adults, which could see the current mandatory 10-day self-isolation from amber and red list countries replaced with daily Covid tests

Matt Hancock today confirmed Israel-style plans to scrap travel quarantine rules for fully-vaccinated Britons may soon come into force, bolstering hopes that summer holidays could still be on the cards.

The Health Secretary confirmed ministers were ‘working on’ relaxing restrictions for double-jabbed adults, which could see the current mandatory 10-day self-isolation from amber and red list countries replaced with daily Covid tests.

But he said No10 could not press ahead with the plan for 31.3million Britons just yet because they are waiting for experts to analyse data from a pilot scheme to see if ‘it will be effective’.

Mr Hancock confessed that he hopes progress will be made ‘soon’. He told BBC Breakfast: ‘We’re not ready to be able to take that step yet, but it’s something that I want to see and we will introduce, subject to clinical advice, as soon as it’s reasonable to do so.’

Fully-jabbed Israeli citizens wanting to travel abroad must take two tests — one three days before boarding their plane on the way home, and the other when they touch down. They must also show border control staff proof they have been vaccinated on an official app.

As well as relaxing travel quarantine rules, Whitehall insiders say ministers also want to follow the US in ditching stay-at-home orders for fully-vaccinated people who come into contact with the infected.

No10 is also facing fresh calls to re-evaluate the travel list after data revealed fewer than one in 250 travellers from amber list countries tested positive for Covid last month. Just 89 of 23,465 people who travelled into the UK from nations such as Spain between May 20 and June 9 had a positive Covid test.

The cases all came from just 16 of the 167 countries on the amber list, according to NHS Test and Trace data. And there were none classed as being ‘variants of concern’ — Alpha, Beta, Delta or Gamma strains.

Asked about whether No10 was considering replacing quarantine rules for fully-vaccinated travellers, Mr Hancock told Sky News: ‘We know the vaccine is working.

‘That’s why it is so important so many people are coming forward to get it and we’re always looking at how we can replace the restrictions we’ve had to have as a country with the protection you get from the vaccine.

‘In fact, that’s the whole point of the vaccine – to protect life and get us out of these restrictions.’

Mr Hancock added: ‘Now, we are not able to make any specific announcements on this today. It is something that we’re working on and I very much hope we’ll be able to make progress soon.’ 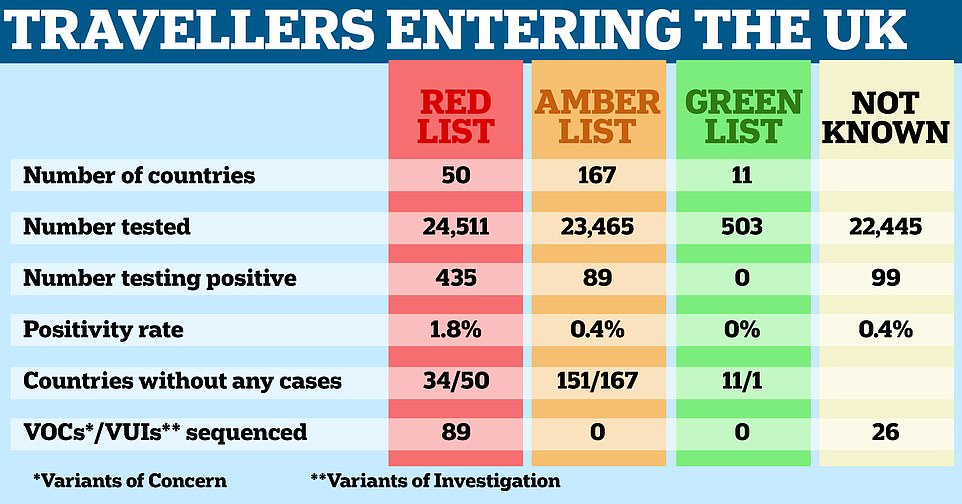 No10 is also facing fresh calls to re-evaluate the travel list after data revealed fewer than one in 250 travellers from amber list countries tested positive for Covid last month. Just 89 of 23,465 people who travelled into the UK from nations such as Spain between May 20 and June 9 had a positive Covid test 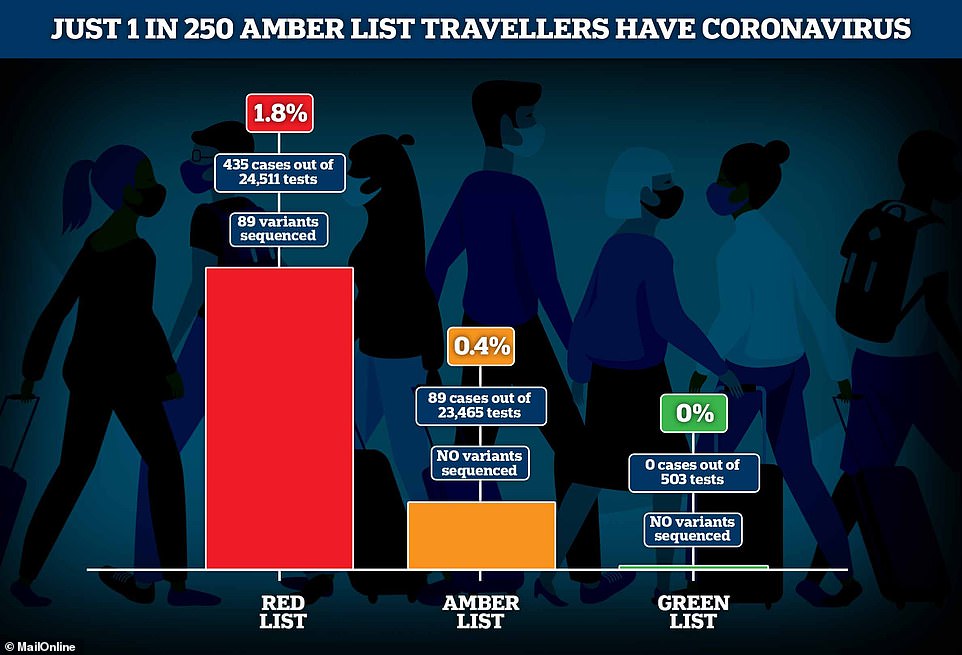 The cases all came from just 16 of the 167 countries on the amber list, according to NHS Test and Trace data. And there were none classed as being ‘variants of concern’ — Alpha, Beta, Delta or Gamma strains 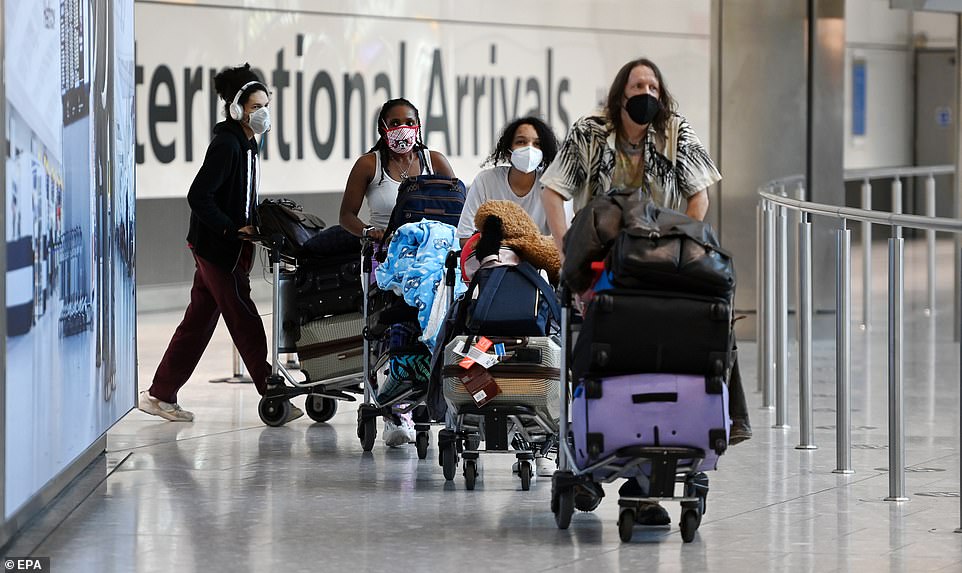 As well as easing the rules on travel quarantine for fully vaccinated Brits, ministers also want to ditch stay-at-home orders for those who come into contact with Covid cases (pictured, travellers wheeling their luggage through Heathrow)

Foreign destinations on the UK’s amber list and whether they are open or closed to UK visitors.

His comments came after Dr Susan Hopkins, Public Health England’s Covid strategy chief, yesterday said there may be ‘alternatives to isolation’ for holidaymakers who have had both jabs.

She told the BBC One’s Andrew Marr show: ‘We’ve talked a lot to countries like Israel who are ahead of us in the vaccination campaign.

‘And they are now really looking at allowing people to come into their country who’ve had two vaccines and not needing to isolate, and they are allowing their population to travel more.

‘We will need to be alert and will need to consider how we can measure the response of these vaccines to new variants that come along.

‘But we are moving steps forward, and I think in a time in the future, I’m not sure when, I can imagine a situation where we’ll have alternatives to isolation for people who have two doses of the vaccine.’

As well as easing the rules on travel quarantine for fully vaccinated Brits, ministers also want to ditch stay-at-home orders for those who come into contact with Covid cases. 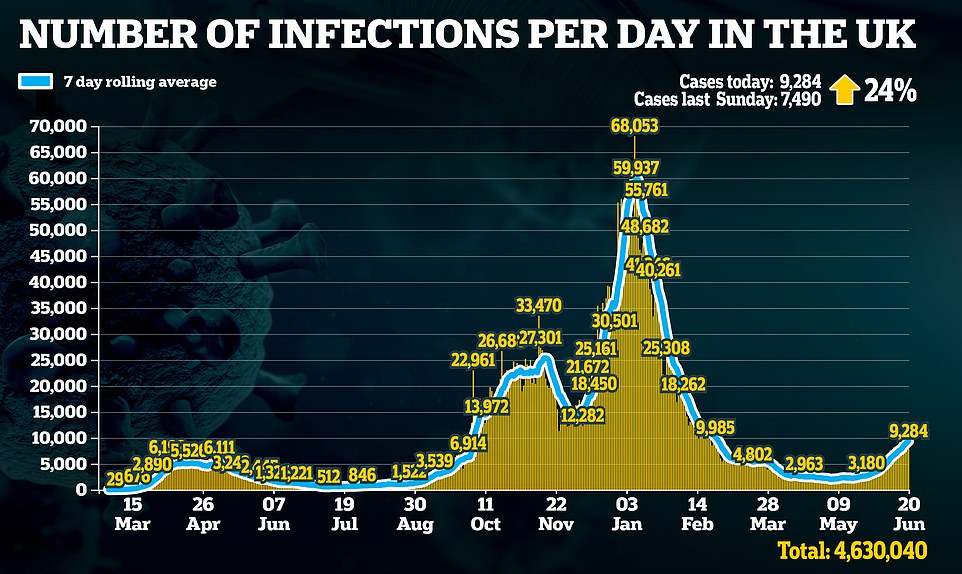 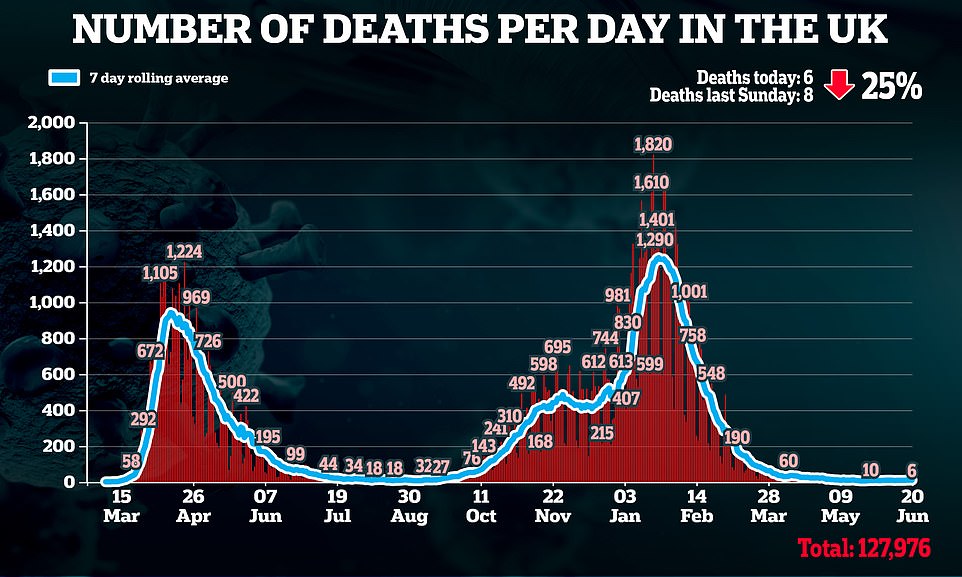 Yesterday’s death figure of six was a slight drop from last week’s total of eight, a sign that the vaccination programme is continuing to keep mortality rates low despite the increase in cases 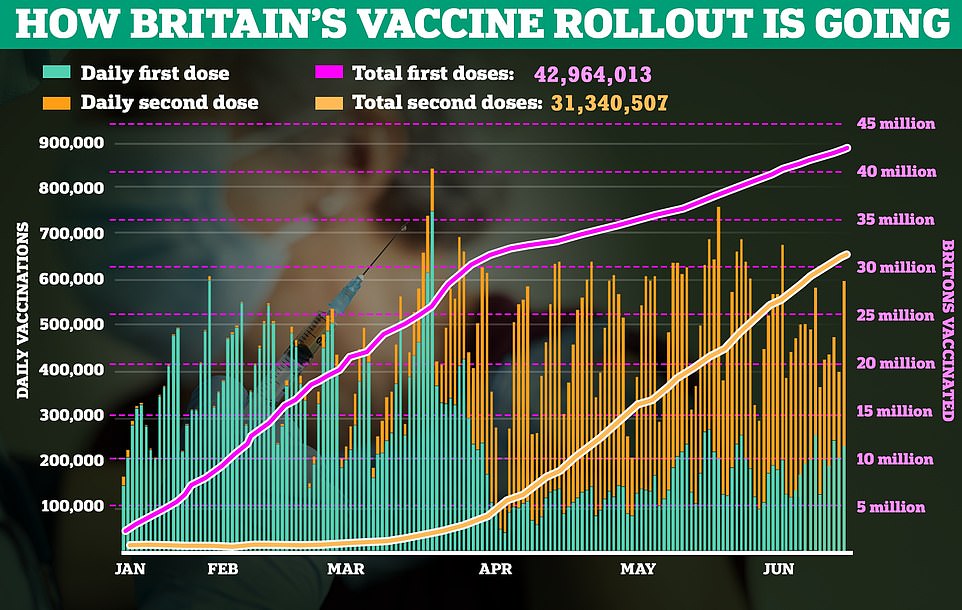 Doctors and NHS trusts are demanding a plan for Britain’s autumn booster jab rollout within weeks to ensure the UK can end its ’emergency response’ to Covid-19 and edge further towards normality.

Medics also want clarity from ministers on how long they believe that immunity from the first two jabs will last and whether children are to be vaccinated as England’s proposed ‘Freedom Day’ arrived with little relaxation of rules because of the Indian ‘Delta’ variant.

The challenge of also doing the winter flu jab campaign as usual – and the potential of a combined shot to fight both the flu and coronavirus – must also be overcome as well as keeping an army of volunteers on standby to administer the injections, experts warned today.

Chris Hopson, the head of NHS Providers and Royal College of GPs chairman Martin Marshall said the plan to ensure every British adult is offered a jab by July 19 is ‘not so much a finishing line as a staging post’.

One insider told the BBC: ‘We cannot just carry on as we are, with an emergency response’.

Almost a third of all adults in the UK have now had two jabs, while 80 per cent of the population has had a first jab. But the elderly and vulnerable are expected to need a third jab to protect them this winter.

Covid booster vaccines are currently being trialled in the UK as health chiefs gear up to offer all over-50s a third dose this autumn.

Southampton University scientists is recruiting thousands of fully-vaccinated Britons to the study, which will test seven Covid jabs as top-ups.

They will record any side-effects analyse the antibody levels of volunteers to check whether the extra dose offered any extra protection. No10’s top scientists are set to be fed the results of the world-first trial to determine how booster shots should be dished out later in the year.

One Whitehall source told the Mail there was a ‘keenness to get going’ with relaxing rules, with hopes of pressing ahead with the move in August.

Ministers were hesitant to favour vaccinated people but now believe it is no longer unfair to do so because the vaccination drive is now open to all adults, insiders claimed.

‘Now we are at the point where all over-18s can book, the balance of fairness has shifted because of the progress we’ve made and where we’re at with the programme,’ the source said.

It is not clear whether there would be an exemption for children – or for those who are unable to be vaccinated.

Ministers have been buoyed by the effectiveness of vaccines against the Indian, or Delta, variant, with the latest data suggesting just one in ten patients in hospital with Covid – 84 in 806 – had received both doses.

Under the plans, daily lateral flow testing would replace the isolation and quarantine rules for the double jabbed, although no final decisions have been made.

A pilot study with up to 40,000 participants is under way and is due to report before the end of the summer.

Cabinet Office minister Michael Gove took part earlier this month after he was told he had come into contact with someone who had tested positive.

Anybody notified through Test and Trace that they are a contact of a positive case must self-isolate for ten days, regardless of their vaccination status.

But under the pilot scheme, people are exempt from the requirement to self-isolate if they take a rapid test daily for a week. They must continue to test negative and not develop symptoms.

Under the travel quarantine rules, Britons going to countries on the green list — such as Israel, Singapore and Iceland, don’t have to stay-at-home on their return.

Travellers from amber list countries including Spain and Portugal are required to self-isolate for 10 days on their arrival in the UK, and take two PCR Covid tests. They can end their self-isolation early by paying for a private test after five days.

Anyone returning from a nation on the red list, such as Afghanistan, must quarantine for 10 days in a Government-approved hotel at a cost of £1,750 for one adult.

Justice Secretary Robert Buckland yesterday claimed ministers were ‘trying to be as flexible as we can’ with quarantine and self-isolation rules.

He told The Andrew Marr Show evidence was still developing on double vaccinations but it ‘looks really encouraging, we’re trying to be as flexible as we can’.

Paul Charles of the PC Agency, a travel consultancy, claimed there was ‘absolutely no reason why those who are double jabbed should have to quarantine from an amber country when they return to the UK’.

He said the UK was ‘an outlier’ and couldn’t carry on with this ‘ridiculous policy’, with both the US and EU now having removed the requirement to quarantine for fully-vaccinated arrivals.

It comes after an analysis of official data showed there were no ‘variants of concern’ found in passengers arriving from ‘amber’ countries from May 20 to June 9.

And there were no positive cases among arrivals from green list countries, where ten-day quarantine is not required.

Ministers say the strict foreign travel rules are there to reduce the risk of dangerous variants from reaching the UK.

But the figures, which cover the period of May 20 to June 9, have led to more calls to relax restrictions, which have caused havoc on the travel industry.

Sir Graham Brady, chairman of the 1922 committee of Conservative MPs, said the Government should start relying on its successful vaccine roll-out.

He told the Times: ‘Vaccination and testing are making international travel safer just as surely as they make things safer within our borders.

‘It’s time British people were able to reap the benefits of the vaccines and for us to get the travel industry moving again.’

Professor Wren, who is based at the London School of Hygiene & Tropical Medicine, said England might open up ‘sooner rather than later’ thanks to the success of the vaccine programme.

He added: ‘We’d still need to be vigilant – but vigilance and vaccination are the two words. If the numbers continue to be promising then I think there’s great hope we could open up on July 5.’ Con woman who swapped £4.2m of diamonds with pebbles in Boodles is found guilty