An ultra-Orthodox teenager, 16, was indicted Monday on charges of torching a bus and attacking the driver and a passerby during violent riots in the central city of Bnei Brak last month.

The teenager was charged with assault and battery, conspiracy to commit a crime, and arson for the attack during ultra-Orthodox protests against enforcement of a lockdown aimed at curing the coronavirus outbreak.

Prosecutors said the teen was part of a mob that pulled a driver from his bus and beat him, lightly injuring him before setting the vehicle on fire. He is also accused of attacking a passerby who tried to help the driver.

The vehicle was completely gutted before firefighters reached the scene, with the flames burning through nearby electric cables and causing a blackout in parts of the predominantly ultra-Orthodox city located near Tel Aviv. Several residents of nearby buildings were evacuated amid fears the bus could explode.

Ultra-Orthodox protesters set a bus on fire during a protest against the enforcement of the coronavirus lockdown, in the city of Bnei Brak, January 25, 2021. (Screen capture/ Twitter)

Police said in a statement at the time that four people were arrested on suspicion of damaging property, including the arson attack on the bus, as well as attempting to harm emergency workers and endangering the public.

The incident came amid several days of fierce clashes between police and rioters who opposed lockdown restrictions, with top ultra-Orthodox officials blaming police for the tensions. 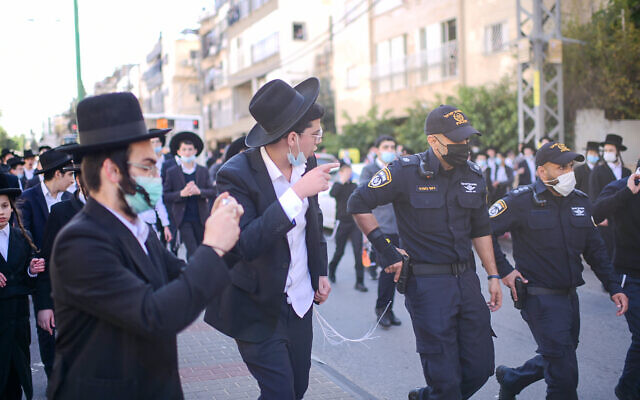 Police clash with Ultra orthodox rioters during a protest against the police enforcement of a lockdown orders due to the coronavirus, in the city of Bnei Brak, January 24, 2021. (Tomer Neuberg/Flash90)

Critics accused the government of not enforcing the lockdown in order to avoid upsetting ultra-Orthodox parties who are key allies to Prime Minister Benjamin Netanyahu.

Though the violence has abated, reports continue of large-scale lockdown violations in the ultra-Orthodox community, most recently on Sunday evening with the funeral of a senior rabbi attended by thousands in Bnei Brak.