NEW YORK (AP) — More than a year after Harvey Weinstein’s rape conviction, his lawyers are demanding a new trial, arguing in court papers Monday that the landmark #MeToo prosecution that put their client behind bars was buoyed by improper rulings from a judge who was “cavalier” in protecting the disgraced movie mogul’s right to a fair trial.

In a 166-page brief filed with a state appellate court, Weinstein’s lawyers took repeated aim at Manhattan Judge James Burke, arguing that he swayed the trial’s outcome with repeated rulings favorable to prosecutors — including a decision allowing additional accusers to testify about allegations that never led to criminal charges.

Weinstein’s lawyers also challenged Burke’s refusal to remove a juror who had written a novel involving predatory older men, as well as his decision to allow prosecutors to have an expert on victim behavior and rape myths testify, while rejecting testimony on similar subjects from defense experts.

“Mr. Weinstein had a right to a fair trial by an impartial jury,” lawyers Barry Kamins, John Leventhal, and Diana Fabi-Samson wrote in the brief.

“The trial court should have exercised the utmost vigilance in protecting this most important right of the defendant,” they wrote. “Instead, the trial court was cavalier in its obligation to safeguard this right and the consequences for Mr. Weinstein were disastrous.”

Weinstein, 69, was convicted in February 2020 of a criminal sex act for forcibly performing oral sex on a TV and film production assistant in 2006, and rape in the third degree for an attack on an aspiring actress in 2013.

He was acquitted of first-degree rape and two counts of predatory sexual assault stemming from actor Annabella Sciorra’s allegations of a mid-1990s rape — testimony that his lawyers said Monday was so dated it should never have been allowed.

Burke sentenced Weinstein to 23 years in state prison, which his lawyers argued Monday was “unduly harsh and excessive.” Given his previously clean criminal record, renowned career as an Oscar-winning movie producer, and history of charitable giving, Weinstein’s lawyers argued that he deserved a significantly lighter sentence.

Weinstein is also charged in California with assaulting five women in Los Angeles and Beverly Hills from 2004 to 2013. His extradition has been delayed because of the pandemic. Weinstein tested positive for the coronavirus shortly after arriving at the maximum security Wende Correctional Facility near Buffalo last spring.

Weinstein maintains his innocence and contends that any sexual activity was consensual.

Weinstein’s lawyer said at the time of his conviction, Weinstein was “somewhat flabbergasted” by the verdict, but that he remained “cautiously optimistic” that he could prevail on appeal. The lawyers filed a notice of appeal in April 2020. Arguments are not expected for several months. 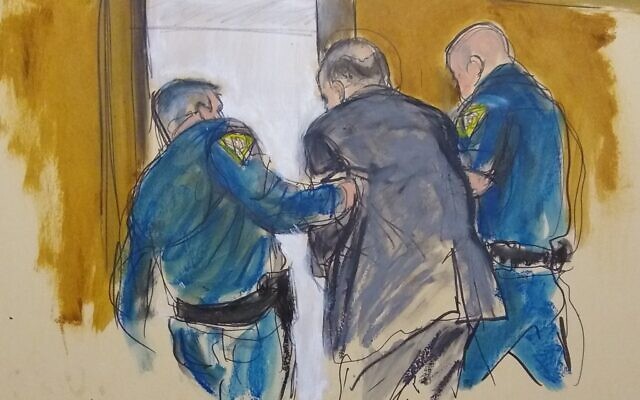 In this courtroom sketch, Harvey Weinstein, center, is led out of Manhattan Supreme Court by court officers after a jury convicted him of rape and sexual assault, February 24, 2020, in New York. (Elizabeth Williams via AP)

A spokesperson for the Manhattan district attorney’s office declined to comment on Monday’s filing, saying: “We will respond in our brief to the court.”

In the filing, Weinstein’s lawyers argued that he was tried in “carnival-like conditions,” with protesters chanting “rapist” outside the courthouse, and that Burke should have acceded to their demands to delay or move the trial, particularly after Los Angeles authorities announced the new charges against Weinstein just as jury selection was starting.

Burke, they wrote, “refused to acknowledge any possible prejudice injuring to (Weinstein) from either the charges unveiled with great fanfare in California or the intimidation tactics in and around the courthouse.”

The judge’s decision to allow testimony from three women whose allegations did not lead to charges in the New York case “overwhelmed” the trial with “excessive, random, and highly dubious prior bad act evidence.”

Rules vary by state on calling witnesses to testify about “prior bad acts” outside the actual charges. New York’s rules, shaped by a landmark decision in a 1901 poisoning case, are among the more restrictive.

In the case, People v. Molineux, the state’s highest court reversed the conviction of a chemist accused of poisoning a rival with cyanide-laced seltzer because prosecutors had relied too heavily on evidence suggesting he previously poisoned someone else.

Weinstein’s lawyers argued that extra testimony went beyond detailing motive, opportunity, intent, or a common scheme or plan, and essentially put him on trial for crimes he was not charged with and had not had an opportunity to defend himself against.

“Because the evidence on the charged offenses was weak, the prosecution inundated the jury with copious tales of alleged misconduct (much of which was not criminal in nature) that served no legitimate evidentiary purpose, but merely depicted Weinstein as loathsome,” Weinstein’s lawyers wrote.