More than a month after returning home from the coronavirus ward, 46-year-old Shlomi Tova is still sleeping with oxygen and battling “a tiredness you just can’t describe.”

He is one of a growing number of so-called long COVID cases — people who are certified negative and released from the hospital after improvement, but whose bodies react with a sort of medical aftershock.

Tova was a healthy working-from-home software engineer and hands-on dad to two kids until he caught the coronavirus, apparently from his mother, Miriam. They ended up in adjacent rooms at the Galilee Medical Center, but while he returned home, she died from the virus.

Now, as Tova mourns his mother, he also struggles with the fact that though state statistics consider him “recovered,” that doesn’t mean he has actually shaken the illness. “I always sleep with an oxygen machine and the exhaustion during the day is indescribable,” he told The Times of Israel.

Shlomi Tova’s mother Miriam with her grandchildren, in one of the last photos taken before she died of the coronavirus, aged 66. (Shlomi Tova)

“It’s hard to get up in the morning, and after an hour I just want to go to sleep again. Going upstairs is a challenge, and even taking something from the refrigerator is a big deal. I was always the cook in this house, but now my family has to do everything.”

Tova, an avid nature photographer who is one of the few patients to take high-quality photos inside a coronavirus facility, spoke in an interview of his ongoing illness, bereavement, and the crushing loneliness of isolation in a coronavirus ward where adults “cry like babies.”

Today Tova, whose great love is going into nature to photograph birds and other animals, rarely leaves his home in the Galilee city of Karmiel. One of his few trips was to the grave of his mother, whose funeral he couldn’t attend as he was still in the hospital. His wife and his children, aged 11 and 16, help him with household tasks. He has come to accept long COVID as a fact of life. “Doctors tell me it’ll be a process of months, not weeks. So I’m ready for it,” he said.

While some patients make a fast recovery from the coronavirus, others are reporting a wide range of aftereffects and in Israel, as elsewhere, healthcare providers have been opening special clinics to treat them.

At Hadassah Medical Center’s clinic in Jerusalem, doctors see a wide range of symptoms, from breathing problems to psychological issues. “Every day is a new surprise with this virus,” said the clinic’s head, Neville Berkman, in a recent podcast. 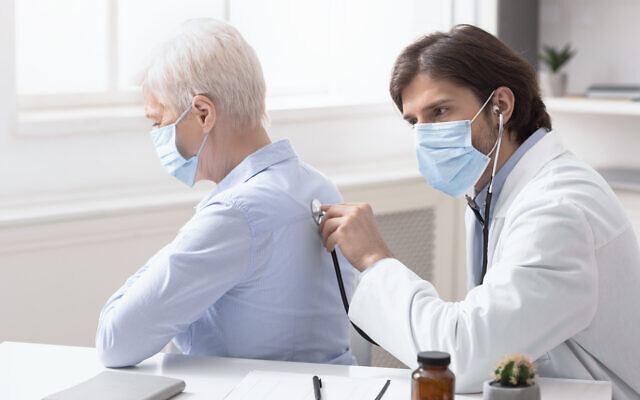 Illustrative image: a doctor in a clinic checks a patient’s breathing (Prostock-Studio via iStock by Getty Images)

Much is still unknown about the aftereffects, such as why they impact some and not others, and what exactly causes them. “Whether the reaction is some kind of aberrant or overactive immune response, we don’t know,” said Berkman.

Tova believes that his coronavirus experience, especially the long COVID element of it, challenges the common assumption that young and heathy people don’t need to worry about the virus because they can be sure of a quick recovery after just a light illness.

“People just don’t understand what this virus can do,” he said. “I’m worried for everyone. I was in the hospital over the [holidays] and saw footage on the news of people meeting, praying together and even going to weddings in violation of rules enacted to stop the virus.

“To me, in that hospital room, they looked like insane people. They just didn’t grasp the illness.”

His illness started around Rosh Hashanah. “I think I got infected from my mother,” he said. “I was with her on Shabbat and five days later the symptoms started — fever, cough, and difficulty tasting. I was in isolation in my room, where I stayed as my family brought me food.

“Three days after becoming infected I was in the shower and I had difficulty breathing. After 10 minutes I called the family doctor, and within a few minutes more I was hospitalized. My mother was already in the Galilee Medical Center in Nahariya, so I asked to go there.” 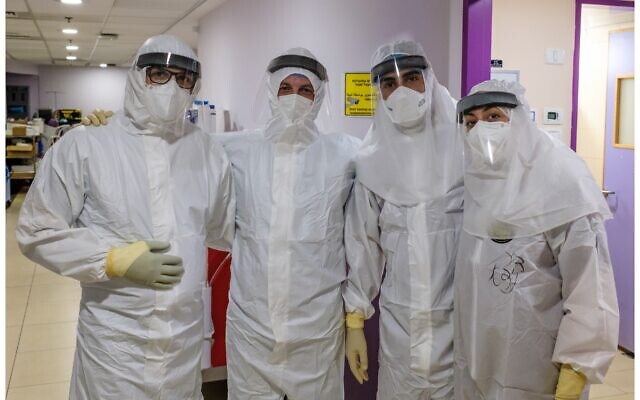 Staff at a COVID-19 ward at the Galilee Medical Center. (Shlomi Tova)

He quickly sensed that the profile of patients was different from what he had imagined, with others who, like him, were young and enjoyed good health until they caught the virus. “When I was in intensive care there were people without background illnesses,” he said. “Nobody knows why it hits some people harder. I’m a bit overweight, but we really don’t know. There’s so much uncertainty.”

With badly infected lungs he was given drugs and plasma and was connected to machinery to help him breathe, but not to a ventilator. “We were hospitalized in adjacent rooms, and on one of my first days they took me from my machines and said come and see your mother.

“I saw her and went back to my room. The next day, the doctor came and told me she had died.”

Even with his symptoms and the bereavement, one of the most difficult aspects of hospitalization was the loneliness of life in a ward of strictly quarantined people, where staff are only supposed to enter for limited periods.

“Only half the difficulty is medical, the other 50 percent is the loneliness,” he said. “It’s that you are staring at the walls and can’t see your family. I really can’t explain what it’s like.

“When the staff came in and exchanged a few words with me, it felt better than all the medications. And that’s even with the videos to watch and WhatsApp calls to family. I can’t describe the feeling when I finally left and saw the sun.” 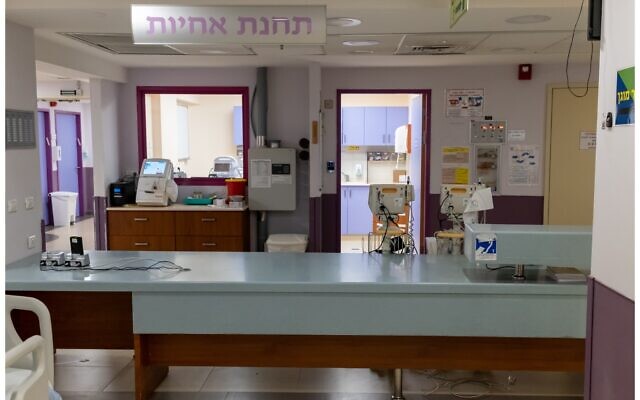 The empty nurses’ station in the ward where Tova was hospitalized – unstaffed as medics are only allowed in for short periods, a reality that leads some patients to feel isolated. (Shlomi Tova)

He added: “The important thing I have to say is I can’t describe in words what it is to go three weeks with no real connection to the outside world. It hurts as much as the disease. People think it won’t happen to them but I can tell you it does, and when people go into that isolation room in hospital, adults cry like babies.”