The CEO of the Tnuva food conglomerate, Eyal Malis, was questioned under caution by police Tuesday in a corruption probe involving aides to an ultra-Orthodox government minister.

Investigators suspect donations Malis gave to bodies associated with lawmaker Yaakov Litzman of the United Torah Judaism party, who led the Health Ministry for many years, were bribes in exchange for regulatory assistance, the Ynet news site reported.

Malis’s lawyer Ilan Sofer said, “Tnuva, under the direction of Eyal Malis, acted and acts solely in accordance with the law,” adding that he was certain the investigation would bear this out.

On Sunday, police arrested Motti Babchik, Litzman’s senior assistant and close confidant, and Menachem Gesheid, a senior adviser to Litzman, on suspicion of corruption. Others nabbed included a department head at Tnuva and top officials at a medical company and a lobbying firm.

Motti Babchik seen in the Knesset on March 3, 2020 (Yonatan Sindel/Flash90)

Israel Police said in a statement that following an undercover investigation the suspects were arrested and questioned under caution. Several other people were also detained on suspicion of corruption, fraud, and breach of trust. Searches were made at several addresses in addition to the homes and offices of the suspects.

Police said the suspected public servant, apparently a reference to Babchik, used his position to act “in a clear conflict of public interest.”

Investigators suspect that on several occasions the civil servant, along with the others involved, took bribes in return for advancing the commercial interests of large companies.

Hebrew media reports indicated that several Tnuva officials were questioned, and police were checking whether company officials had provided bribes in the form of donations to various Hasidic bodies in return for regulatory favors. 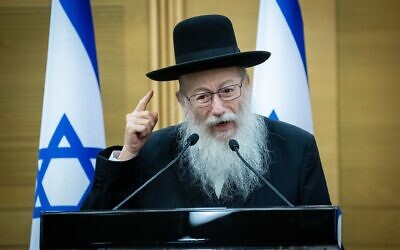 Housing Minister Yaakov Litzman of United Torah Judaism speaks during a press conference at the Knesset on May 6, 2021. (Yonatan Sindel/Flash90)

Litzman himself is suspected of corruption in another case. Attorney General Avichai Mandelblit announced late last month that he had decided to indict him for obstruction of justice and breach of trust, pending a hearing.

The pending charges relate to suspicions that Litzman used his former position as deputy health minister to prevent the extradition to Australia of Malka Leifer, a former principal of an Orthodox girls school in Melbourne accused of sexually assaulting minors (Leifer was recently extradited after a years-long legal process); and to prevent the closure of a deli cited for health violations.