Overriding objections from the minister in charge of prisons, Health Minister Yuli Edelstein said Thursday that Israel will start vaccinating all prisoners next week, including Palestinian security prisoners being held in Israeli correctional facilities.

“We adhere to all of the priority committee’s guidelines,” Edelstein said while visiting a vaccination center in the central city of Ramle, referring to the Health Ministry panel tasked with setting national policy vaccination priorities.

The committee currently recommends that everyone 55 and over, including prisoners, receive the injection.

Public Security Minister Amir Ohana, however, has thus far instructed prison officials to refrain from vaccinating inmates against COVID-19 until further notice, after a Palestinian official said that security prisoners were expected to soon begin getting shots. Ohana’s ban included not only security prisoners, but all inmates.

Ohana has called for vaccinations to be given only to prison guards, not inmates, until a larger number of non-incarcerated Israelis are inoculated.

Speaking Thursday, Edelstein said: “I’m not going to differentiate and check which vaccine went to the jailer and which went to the prisoner.”

Castigating Ohana, a fellow member of the Likud party, Edelstein added, “Instead of arguing, imagine how a prisoner might not be vaccinated [and get sick] and then medical staff and equipment might need to be wasted on them.”

Edelstein’s comments came after President Reuven Rivlin slammed Ohana’s instruction, saying it was inconsistent with the values of the State of Israel and of Judaism.

“Preventing life-saving medical treatment from people in prison — whether due to a sentence imposed on them by the court or due to detention prior to sentencing — is inconsistent with our values, the values ​​of the state, Judaism, and democracy.” Rivlin declared in a Thursday morning statement.

Rivlin requested that Edelstein ensure that “the matter be resolved as soon as possible,” declaring its importance “in order to maintain the health of the prisoners and the Prison Service staff.” 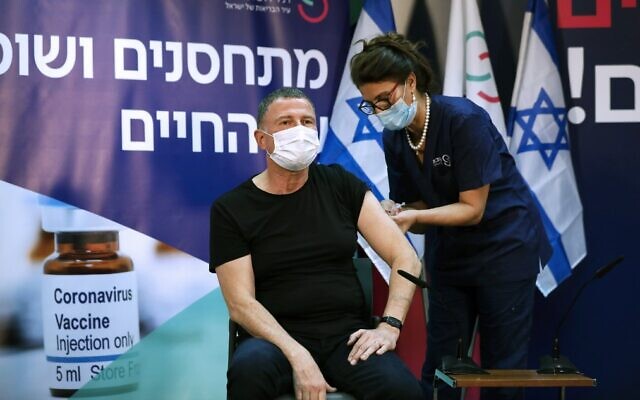 Additionally, the attorney general’s office has told Ohana that his order not to vaccinate prisoners was given “without authority” — as only the Health Ministry was permitted to decide who should be vaccinated — “and thus cannot stand.”

In response to the public security minister’s order, five human rights groups petitioned the High Court of Justice on Sunday to overturn the decision.

The petition demanded that the Israel Prisons Service “vaccinate the entire prisoner population according to the vaccination priority set by the Health Ministry,” the organizations said in a joint statement.

Israel is currently pushing ahead with its vaccination campaign and began to administer second doses of Pfizer’s coronavirus vaccine to the public on Sunday, three weeks after it started its national inoculation drive.