Several ministers were overheard prior to a cabinet meeting on Sunday saying that some coronavirus-related restrictions are only aimed at incentivizing vaccination, rather than driving down morbidity, while lamenting that the unvaccinated are taking up hospital beds.

The “Green Pass” is a document held by those who are vaccinated or have recovered from COVID, and is required to access most indoor public places, as well as crowded outdoor attractions.

“In pools, too, not just in restaurants. Epidemiologically it’s correct,” Horowitz responded to Shaked, noting that the Green Pass is not particularly needed at outdoor gatherings.

“The thing is, I’m telling you this, our problem is people who don’t get vaccinated. We need that they… otherwise… we will not get out of this,” the health minister added.

Horowitz pointed out that the Green Pass currently applies to most public attractions, except malls, and he doesn’t want to make exceptions, “because then they will say — if not pools, then why water parks?

“Still, we don’t want to do things that don’t have medical justification.”

But, the health minister added, “we have a problem. The Green Pass is not enforced, especially in the Arab sector… it does not exist, and I see it in hospitals. It’s overloading the hospitals,” Horowitz lamented.

Israeli woman displays her ‘Green Pass’ for a concert organized by the Tel Aviv municipality at Bloomfield Stadium on March 5, 2021. (Miriam Alster/FLASH90)

“You can really see now,” Horowitz said. “Let’s say a person under 60-65 in critical condition arrives at a hospital, without a doubt, he’s unvaccinated. Above 60-65 it is two-thirds unvaccinated and one-third vaccinated, more or less. [COVID] is [now] an event of the unvaccinated,” he explained to Shaked.

Intelligence Minister Elazar Stern joined the pair’s conversation at that point: “It’s irritating,” he said, “that [the unvaccinated] are taking up beds” in hospital’s coronavirus wards.

Numbers released by the Health Ministry on Friday showed that among people under 60, those without a third dose of the vaccine were nearly three times as likely to wind up seriously ill, and those without any vaccination were around 10 times as likely. For those over 60, having a booster made you 10 times less likely than a vaccinated person to be in serious condition, and 40 times less likely than an unvaccinated person.

A senior health official said Friday that the vast majority of COVID-19 patients hospitalized in serious condition were unvaccinated. 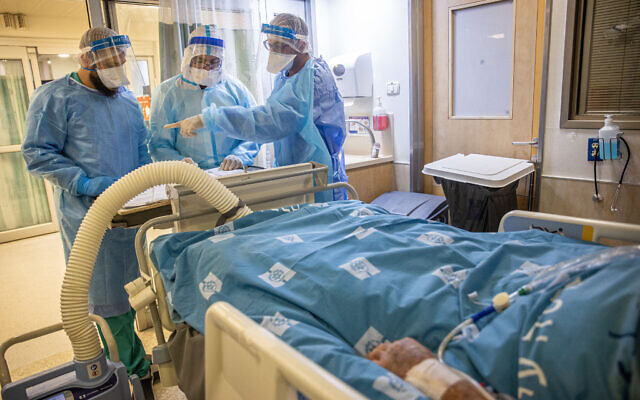 Sharon Alroy-Preis, head of public health at the Health Ministry, said Friday that almost every COVID-19 patient on a ventilator is not vaccinated. Additionally, of the 27 patients connected to extracorporeal membrane oxygenation (ECMO) machines, most of whom are under the age of 60, 90 percent were unvaccinated, according to Alroy-Preis.

Ahead of Sunday’s cabinet meeting, Horowitz and Shaked also discussed the high positivity rate among those who returned last week from Uman after spending Rosh Hashanah in the Ukrainian city — amid reports of widespread faked COVID tests allowing them to board planes returning home.

“There’s all sorts of local organizations, and they come and they do the test and they sort of just touch the tongue,” said Horowitz, instead of inserting the testing swab deep into the mouth and nose. “And then it comes out negative. Magen David Adom knows how to do the test as necessary.”