Health Minister Yuli Edelstein is reportedly looking at legislation that would make it compulsory for all Israelis to be inoculated against the coronavirus when a vaccine becomes available.

Edelstein consulted three judges over legal options to address fears among the public that the quick pace in developing a vaccine may have come at the expense of safety, Channel 12 news reported Thursday.

Under the terms of the proposed law the state would compensate anyone who is harmed by the vaccines, the report said.

Edelstein sent a letter to Jerusalem Magistrate’s Court Deputy President Gad Ehrenberg, and to Amir Dahan and Keren Miller, both judges in the court.

The minister wrote that the country needs to prepare for the vaccine, including attempting to overcome fears some people may have that researchers have skimped on safety in the rush to develop inoculation against COVID-19, the disease caused by the coronavirus.

“In light of the concerns arising from the vaccines’ accelerated development processes, the State of Israel should take a clear position both in terms of health regarding the importance of vaccination against the virus and… a willingness to bear the consequences of vaccination and compensate if necessary any citizen who is harmed, God forbid, as a result of receiving the vaccine,” he wrote.

Edelstein explained that clinical trial periods are being greatly shortened to enable rapid development of a vaccine.

“It is clear that this rapid development raises concerns among many about the possibility of various side effects that will appear after the vaccine is given,” he continued. “As a result, many may fear receiving the vaccine, which will significantly limit the country’s ability to fight the epidemic.”

Earlier this week the Israel Democracy Institute published the results of a poll that found most Israelis do not want to be among the first group of people given a coronavirus vaccine.

There has been a spike in expectations that a vaccine may be available by early next year, after three bodies working on inoculations all recently announced that human trials have shown their vaccines are at least 90 percent effective.

Israel has signed agreements with various companies to obtain final product vaccines including with the US-based firms Moderna and Pfizer, both of which are conducting Phase 3 trials. In addition, Russian researchers are in Phase 3 trials for another vaccine product, which Israel has said it may be interested in.

Pfizer is preparing within days to formally ask US regulators to allow emergency use of the vaccine. 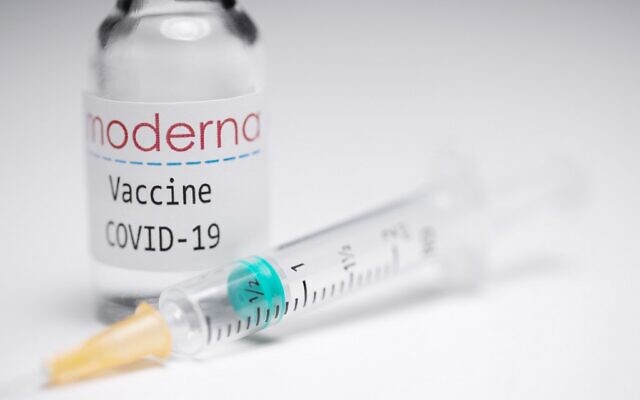 A syringe and a vial with the logo of US biotech firm Moderna. (AFP)

The number of vaccines Israel will receive from Moderna has not been disclosed. Netanyahu on Tuesday said he was negotiating with the company for additional shots.

Separately, the Hadassah Medical Center said that it has preordered 1.5 million units of the Russian vaccine and would seek Health Ministry approval to distribute the immunization pending final results of trials.

On Monday Netanyahu and the Kremlin said the prime minister had spoken with Russian President Vladimir Putin about the possibility of purchasing Russia’s coronavirus vaccine, called Sputnik V.

Israel is also developing its own locally produced vaccine, albeit at a slower pace.

As of Tuesday there were 8,381 active coronavirus patients in Israel, according to Health Ministry figures. Since the start of the outbreak there have been 326,628 cases diagnosed and 2,739 people have died of COVID-19.