Health Ministry Director-General Chezy Levy said Friday children in Israel could start vaccinating as early as May, days after BioNTech-Pfizer said its vaccine showed 100 percent efficacy against the coronavirus in 12- to 15-year-olds.

Levy said the inoculation drive could begin “the moment there is approval from the FDA.”

The Health Ministry said Wednesday that it was ready to vaccinate the country’s young adolescents as soon as the US Food and Drug Administration and European regulators authorize the Pfizer-BioNTech vaccine for young teens.

A ministry official said there is enough of an existing stock of Pfizer vaccines in Israel to start inoculating about 600,000 Israelis aged 12-15.

Pfizer CEO Albert Bourla has expressed optimism that the shots will be approved for children younger than 12 in the fall of 2021. The company has already begun vaccine trials on young children.

Levy also said the Health Ministry was still discussing whether to remove the requirement for wearing masks in outdoor spaces, a matter that has increasingly been on the agenda as infections plummet.

“Opinions in the ministry are divided,” he said. “We are holding discussions amongst ourselves and with experts, and I hope we come to the right decision.”

National coronavirus czar Nachman Ash said Thursday that he believes it is unnecessary for individuals to wear masks outside when they are alone, and that officials will consider the matter after Passover.

Data released Friday showed the number of weekly new coronavirus infections had dipped to the lowest level in Israel since June 2020, as serious cases hit a three-month low.

According to the Health Ministry, only 2,479 new cases were discovered in the past week, compared to 5,011 the week prior, marking the lowest weekly tally in ten months.

The number of COVID-19 patients in Israel in serious condition dropped to 368 as of Friday, the lowest rate since December 2020. The number has been on a steady decline for several weeks, after climbing to an all-time high of 1,201 in mid-January.

The basic reproduction number, the daily share of positive coronavirus test results, and the number of active cases have all been on a several-week downward trend. 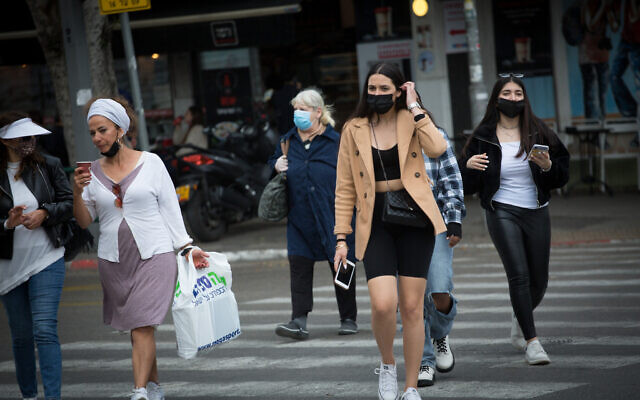 The virus’s basic reproduction number was at 0.61. Any figure under 1 means the outbreak is abating. The figure represents the situation as of 10 days ago due to the incubation period.

With no deaths reported overnight, the toll stood at 6,220 on Friday.

The pandemic has continued to ebb following Israel’s successful vaccination campaign, which has seen a majority of its citizens get the shots.

Israel has so far vaccinated over 4.8 million people — or over 51.67% of its population — with two coronavirus vaccine shots. About 56.49% of Israelis, more than 5.2 million, have received at least one vaccine shot.

When it comes to vulnerable populations, these numbers are much higher. Over 90% of all Israeli residents over 50 are fully inoculated with two vaccine shots or had recovered from the virus.

Israel started to emerge from its third national lockdown in February, with the economy now largely open. Restaurants and cultural venues have once again opened to the public — under certain restrictions — and travel inside the country is mostly free of coronavirus limitations, especially for the vaccinated.