Prime Minister Naftali Bennett and Health Minister Nitzan Horovitz are weighing a range of fresh COVID measures, including returning the indoor mask mandate, to beat back a series of outbreaks at schools.

The Health Ministry is considering returning the mask mandate for schools, Ben Gurion International Airport, and potentially all public indoor spaces, according to multiple Hebrew media reports on Sunday. The new government is also expected to reestablish the coronavirus cabinet that existed under the previous government, as concerns about the extra-contagious Delta variant, which was first discovered in India, have continued to grow in Israel.

Over the past few days, Israel has experienced a small uptick in new COVID cases, due to two outbreaks in schools in Binyamina and Modi’in, where dozens of unvaccinated children tested positive for the coronavirus. Both outbreaks are believed to stem from individuals returning from abroad, and the Health Ministry on Sunday reinstituted the mask mandate in schools in the two towns.

According to Channel 12 news, the government has decided to establish a new, enlarged testing area at Ben-Gurion Airport and to boost the enforcement of quarantine for those who require it — mostly unvaccinated children and those returning from “red” countries — with the assistance of Border Authority employees.

Channel 13 reported that the United Kingdom could be added to the list of “red” countries, which would also mean that Israelis would be banned from traveling there.

Channel 13 News reported on Sunday that the government is considering reinstituting quarantine for all those who return from abroad, including those who are vaccinated, and bringing back limits on mass gatherings that were largely lifted last month.

Officials in the Health Ministry indicated on Sunday that the recent outbreaks in schools — largely linked to people who tested positive after returning from abroad — should lead to a greater push to vaccinate 12- to 15-year-olds. New Health Ministry figures revealed by Channel 13 on Sunday indicate that 12 percent of youth who were infected with COVID and recovered still suffer from long-term symptoms and complications.

Gabi Barbash, a former director-general of the Health Ministry, told Channel 12 on Sunday that all children eligible to be vaccinated should do so.

Vaccinations for 12- to 15-year-olds in Israel began two weeks ago, but the Health Ministry did not issue a direct recommendation for teens to get vaccinated.

According to the Kan public broadcaster, the ministry is now leaning toward recommending that teenagers be vaccinated as soon as possible and is considering launching a public campaign aimed at convincing parents to do so. Hebrew media reports indicate that demand for vaccines for 12- to 15-year-olds has spiked over the past few days due to the outbreaks.

Barbash told Channel 12 that he would recommend parents not take any unvaccinated children abroad this summer, due to fears of the Delta variant. That mutation “is a game-changer. It is taking control the world over,” he said. “We’re going to have to live with it. It’s far more contagious… It also hits youths and children.” 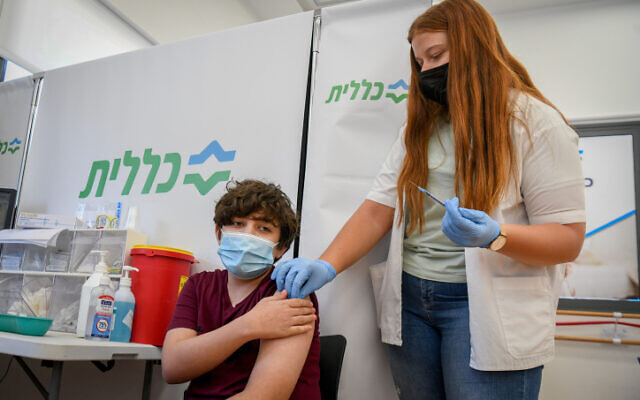 An Israeli child receives a COVID-19 vaccine at a Clalit vaccination center in Petah Tikva, on June 6, 2021. (Flash90)

Barbash said he backs the proposal to reinstate masks at Ben-Gurion Airport as well as in schools: “We’ve got to go backwards.”

Israel officially lifted its indoor mask mandate on June 15, removing the requirement for masks virtually everywhere except on planes.

At the government’s first cabinet meeting on Sunday, Education Minister Yifat Shasha-Biton clashed with Bennett and Horovitz, the health minister, over COVID regulations. Shasha-Biton reportedly opposed extending the Coronavirus Law that provides the government with emergency powers to deal with the virus. The education minister accused the Health Ministry and other officials of acting out of political motives, something that both Bennett and Horovitz rejected.

Shasha-Biton opposed the idea that Israel is still in an emergency situation, and claimed that the figures and numbers of the past month back up her assertion. Justice Minister Gideon Sa’ar proposed a compromise deal that calls on the government to establish a new law within four months that would replace the current law, and Shasha-Biton reportedly accepted that arrangement.

On Sunday morning, the Health Ministry ordered all those present at a show in Beit She’an Thursday night — including those vaccinated — to enter quarantine after a member of the audience tested positive for the Delta COVID variant. But later on Sunday, the Health Ministry walked back the decision, saying only those who are unvaccinated must quarantine, but others at the event should get tested and stay home until they receive their results.

As of Sunday evening, there were 287 active COVID cases in Israel, including 46 confirmed cases in the past 24 hours, according to the Health Ministry.