Health Minister Nitzan Horowitz said Monday that he does not plan to push for the government to order the closure of Ben-Gurion airport, a day after reports suggested that authorities were mulling the move as a response to rising coronavirus infection rates.

Horowitz made the comments to fellow ministers, according to Hebrew media reports, and other senior officials said similar broadly applied measures such as a lockdown were not on the table yet, even as the ministry announced that over 800 new cases were confirmed Sunday, bringing the total number of active cases in the country to almost 7,000.

Media reports Sunday indicated that the government was considering a drastic halt to airport travel in order to block entry of coronavirus variants into the country. The Delta mutation in particular has been blamed for a recent resurgence in infections, pushing officials to impose fresh restrictions to curb the wave.

The sources noted that such a decision would cause panic among the tens of thousands of Israelis who are abroad.

During the meeting, Horowitz reportedly made it clear that closing the airport was not being considered. The proposal had been raised during recent discussions about measures to counter the recent outbreak, including with Prime Minister Naftali Bennett, but sources in the Prime Minister’s Office said that no such decision was likely to be made in the coming days, the Ynet website reported.

There has been some pushback from medical experts against the notion of shuttering the airport.

Galia Rahav, director of the infectious diseases unit at Sheba Medical Center, told Radio 103FM that there is no need to stop travelers from leaving the country.

Though acknowledging that Health Ministry figures showing 10 percent of those infected in recent weeks were arrivals from abroad is “significant,” Rahav noted that 90% of infections were being spread locally. 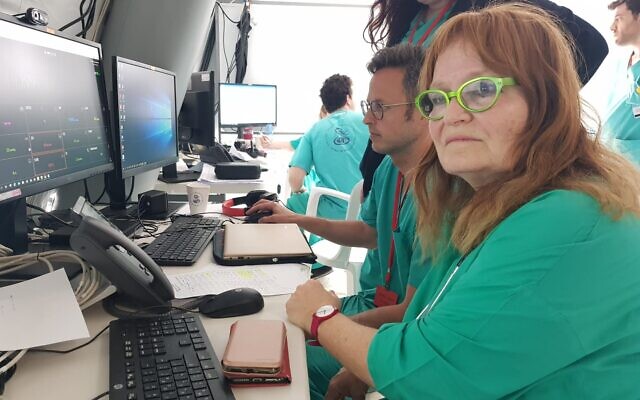 “Even if we shut off that 10%, the virus is already among us,” she said.” That will perhaps reduce it a little but it is not the solution that will solve everything.”

However, Rahav said she is in favor of limiting the number of travelers — another measure said under consideration by the government — because the current number of people making trips abroad is “not right.”

Tal Brosh, who advises the Health Ministry on coronavirus policy, also spoke out against applying any broader lockdown measures. “I am opposed to a lockdown at the moment when the clear majority of the population is vaccinated,” he told Army Radio. “A lockdown is very harmful for the public and the economy.”

At least 35,000 people were reportedly expected to pass through Ben-Gurion Airport Monday. On Sunday, 22,000 travelers departed.

The Health Ministry announced that there were 829 new confirmed cases on Sunday, bringing the number of active cases to 6,952.

The ministry said 66 people were hospitalized in serious condition, five more than the day before, and the death toll had risen by one to 6,450. Over 1.7 percent of cases came back positive, the highest figure since March 22.

At the Monday morning meeting, Howoritz reportedly said that the Health Ministry will demand other measures that target events with over 100 participants.

“At this stage, there is no intention of limiting the number of participants at events, nor to take steps that will harm economic activity,” Horowitz said, according to the Channel 13 report.

Instead, the ministry will push for a reintroduction of the Green Pass vaccination certificate, used in the past, which would once again restrict attendance at performances, restaurants, hotels, and gyms to only those who are vaccinated or have recovered from COVID.

Horowitz aid that the Green Pass system should be applied immediately to “prevent [further] restrictions that will harm the economy and daily life in the future.”

Ministers are expected in the coming days to meet with representatives from relevant industries that will be impacted by a return to the Green Pass system, the report said. 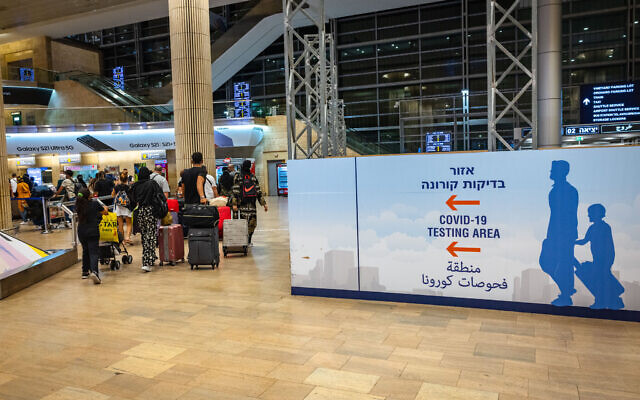 Travelers arriving at the Ben Gurion International Airport, stand in line to get a COVID-19 check upon arrival. July 1, 2021. (Nati Shohat/FLASH90)

Health Ministry Director-General Nachman Ash on Sunday issued a fresh plea for Israelis to avoid traveling overseas for their summer vacations, noting that coronavirus cases are rising in numerous countries.

“It’s not the time to fly abroad,” Ash said in a media briefing. He added that his office is examining ways to limit flights, without elaborating further.

Israel has already taken some measures to stem the arrival of the virus from abroad. On Friday new restrictions took effect requiring all passengers to self-isolate for 24 hours upon arrival or until they receive a negative result from a virus test taken upon arrival, and the list of countries to which Israelis are barred from flying was updated with more nations.

Those returning from 15 countries deemed to have high infection rates will be required to quarantine for a full seven days with a negative test result, according to the ministry’s updated guidelines. The full quarantine period was recently shortened from the previous 10-14 days.

Additional steps being weighed for travelers are allowing travel only for those who are vaccinated or recovered from COVID-19, the report said.

Bennett last week recommended Israelis cancel their summer trips abroad. “Soon the whole world will become ‘red,’ and your trip will be canceled anyway, so don’t even book,” he said.