Such a projection is far rosier than previous estimates, which have seen the pandemic lasting until summer and perhaps fall of next year. Many health officials have previously warned that vaccines are unlikely to provide a swift solution to the pandemic, and that ongoing restrictions on the public will likely remain for some time, as will the need for social distancing, mask-wearing and other safety practices.

Health Minister Yuli Edelstein told Channel 12 Saturday that he expected Israel to have at least hundreds of thousands of vaccines within weeks, possibly before the end of the month.

He added that despite some reports to the contrary, Israel would wait for the US Food and Drug Administration to approve the inoculations before putting them to use.

Health Minister Yuli Edelstein speaks during a press conference about the coronavirus, at the Health Ministry in Jerusalem on June 28, 2020. (Olivier Fitoussi/Flash90)

He said the ministry was hard at work setting up the complex logistics required for the vaccines, which use novel technology and need subzero temperatures during transit and storage that are not necessary for most vaccines.

Even when the vaccine arrives, officials fear large swaths of the public may be averse to receiving the shots. Polls in Israel and abroad have shown many fear the extraordinarily fast approval process for the vaccines may make them less safe.

An unsourced report on Channel 12 Friday said Edelstein and Prime Minister Benjamin Netanyahu may be vaccinated on-camera early on, to serve as an example to the public and assuage concerns. Edelstein did not confirm or deny the plan, saying he had “no problem” with such an idea and would consider what to do in discussions with health officials.

He joked that if he did get vaccinated first, he might face criticism for doing so before others.

On Friday, Israel signed an agreement with Moderna to triple the number of vaccines the American pharmaceutical company will supply. The original agreement for two million doses was expanded to six million — enough for three million Israelis.

“This gives us hope, we see the light at the end of the tunnel,” said Prime Minister Benjamin Netanyahu. 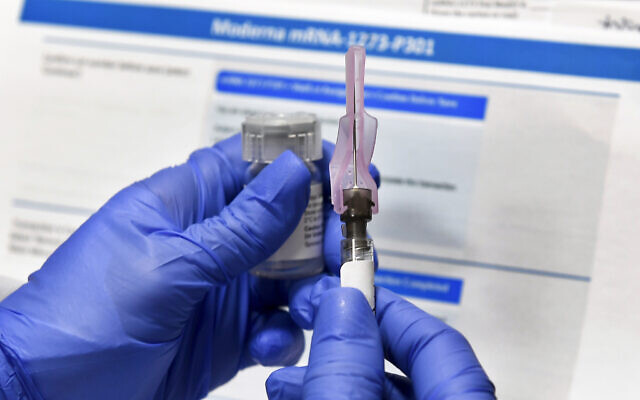 In this July 27, 2020, photo, a nurse prepares a shot as a study of a possible COVID-19 vaccine, developed by the National Institutes of Health and Moderna Inc., gets underway in Binghamton, New York. (AP Photo/Hans Pennink)

TV networks reported Thursday that Israel is set to receive up to four million doses of Pfizer’s coronavirus vaccine by the end of this month — enough for two million people — and the Health Ministry is preparing health maintenance organizations for the possibility of inoculating some 80,000 Israelis every day.

The first Israelis expected to be vaccinated are those working in medical services, the elderly and people at especially high risk.

Edelstein on Friday hailed the extra vaccine purchase as “wonderful news for the citizens of Israel and for the Israeli economy,” but stressed that the general public needed to maintain social-distancing guidelines and avoid letting its guard down.

With the Pfizer vaccines alone, up to a fifth of Israel’s population could be vaccinated by January — a far more optimistic projection than previously assumed. 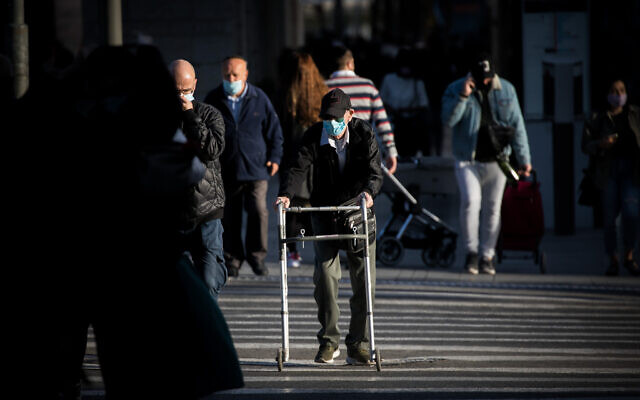 The latest Health Ministry data released Saturday evening showed another 1,506 coronavirus cases were diagnosed Friday, continuing the rising trend in daily cases. The share of tests to come back positive also rose slightly to 2.5 percent, from around 2.3 in recent days.

The number of active cases stood at 13,054, of which 314 were in serious condition. The total number of diagnosed cases since the start of the pandemic stood at 343,665.

Recent days have seen daily case numbers and test positivity rates slowly but steadily rise, with numerous health officials warning that Israel appears to be heading into a third wave of the pandemic.