The Hezbollah terror group is preparing itself for the possibility of the collapse of the Lebanese state amid a spiralling economic and political crisis, according to a report Friday.

Reuters said preparations include issuing ration cards for food supplies, stocking up on medicine and preparing to import and store fuel from Iran. It cited three sources with knowledge of the plans.

It said the plan would help protect Shiite communities Hezbollah dominates from the worst of such a national crisis, while expanding its already extensive role in Lebanese society.

As the economic hardships have mounted, Hezbollah has already been growing its clout in recent months. Stepping in where the state and financial institutions have failed, Hezbollah has been providing a vital lifeline for some Lebanese through the al-Qard al-Hasan Association, its financial arm.

In the country’s wrecked economy, everyone is desperate for hard currency and liquidity as the local currency plummets in value. At commercial banks, depositors stand in line for hours and fight with managers in vain to access their dollar savings. Most banks have stopped giving loans.

But at Hezbollah’s al-Qard al-Hasan people can take out small, interest-free loans in dollars, enabling them to pay school fees, get married, buy a used car or open a small business. They can also open saving accounts there.

A man shouts slogans in front of burning tires and garbage containers set on fire to block a main road during a protest against the increase in prices of consumer goods and the crash of the local currency, in Beirut, Lebanon, Tuesday, March 16, 2021 (AP Photo/Hussein Malla)

The association, officially a non-profit charity, is one of the tools by which Hezbollah entrenches its support among the country’s Shiite population, even as the group has come under enormous criticism over the past year among Lebanese furious at the political elite.

With poverty rising across Lebanon, Hezbollah provides its community with low-cost schools and hospitals and distributes heating fuel to the poor. Hezbollah continues to pay its fighters and employees in its institutions in US dollars, while everyone else gets their salaries in Lebanese pounds, which lost about 90 percent of their value in the crisis.

Lebanon’s economic and financial crisis is the country’s worst in modern history, with the economy contracting 19% in 2020. Tens of thousands around the country have lost their jobs, and nearly half the population of more than 6 million is in poverty.

The crisis has been caused by years of mounting debt amid corruption and mismanagement by the country’s elites. 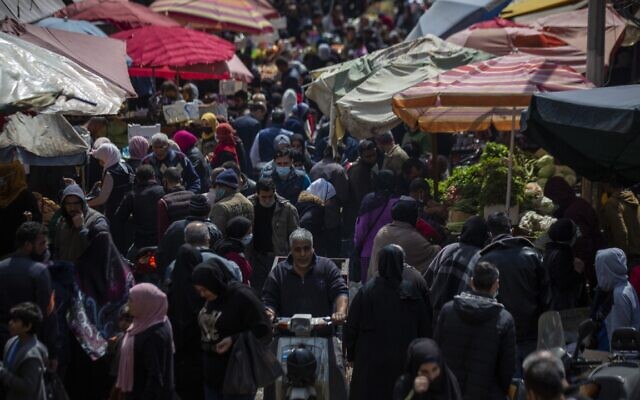 The crisis shattered people’s confidence in Lebanon’s banking system, once among the most respected in the region. As banks took a hit, many people decided to keep their money at home, amounting to up to $10 billion, according to central bank governor Riad Salameh.

Meanwhile, political bickering has delayed the formation of a new cabinet.

The outgoing government resigned last August, following a massive explosion at Beirut’s port that killed 211 people, injured more than 6,000 and damaged entire neighborhoods in the capital.

Prime Minister-designate Saad Hariri has failed to form a new government since he was named for the post in October. Hariri has been insisting on forming a cabinet of experts whose main job will be to get Lebanon out of its paralyzing economic crisis.

Other groups, including Hezbollah, insist on a mixed cabinet of politicians and experts.

A senior US official warned Thursday that Lebanese politicians who continue to block reforms could face punitive actions by Washington and its allies.

US undersecretary of state for political affairs David Hale did not provide details on the nature of the potential actions. But appeared to refer to reports that the United States and its allies may impose sanctions on Lebanese politicians in order to force them to end the monthslong political deadlock and start badly needed reforms to fight corruption.