The High Court of Justice on Tuesday accepted the government’s request to delay the conscription of ultra-Orthodox Israelis, pushing the issue off until the summer.

In 2017, the High Court overturned a law exempting ultra-Orthodox, or Haredi, Israelis from military service on the grounds that the exemption was unconstitutional, due to its unequal treatment of Haredi and non-Haredi people. The court demanded that the government either pass new legislation or begin conscripting Haredi men.

Since then, the government — through the defense minister — has requested and received extensions for this deadline on the grounds that it was still working to pass the bill. But last month, Defense Minister and Blue and White chair Benny Gantz — in what was widely seen as a campaign stunt — refused to request the delay.

However, despite his opposition, the government requested an extension anyway, not because it was making progress on the issue but because of the upcoming March election.

The High Court accepted the argument, granting an extension on the issue until July 6, 2021.

Illustrative: Soldiers of the IDF’s ultra-Orthodox Netzah Yehuda Battalion study at the Peles Military Base, in the northern Jordan Valley. (Yaakov Naumi/Flash90)

The ultra-Orthodox community has historically enjoyed blanket deferrals from the military in favor of religious seminary studies, and many of its members shun military service, which is mandatory for other Jewish Israelis. However, there is opposition to the arrangement from many in the broader population, who want the ultra-Orthodox to help shoulder the burden of defending the country.

Multiple variations of the ultra-Orthodox draft law have been advanced by the Knesset and knocked down by the High Court of Justice in a decade-long legal and political saga.

A failure to pass a Defense Ministry-backed bill formalizing exemptions to conscription was the ostensible reason for the calling of early elections in December 2018. Wrangling over the enlistment of yeshiva students following the April 2019 election helped set off a prolonged period of political deadlock, with two more elections in less than a year — one in September 2019 and the other in March 2020. 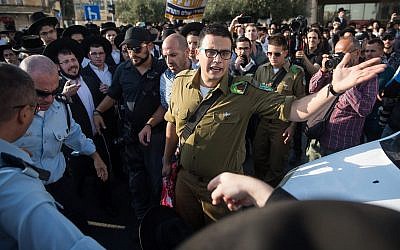 Ultra-Orthodox Jewish men argue with an Israeli soldier during a protest in Jerusalem against the draft for members of their community, on October 17, 2017. (Yonatan Sindel/Flash90)

The Defense Ministry-drafted bill then being debated would have set minimum yearly targets for ultra-Orthodox conscription that, if not met, would trigger financial sanctions on the yeshivas where the students study. At the same time, it would also formalize exemptions for the vast majority of yeshiva students.

The new bill, when legislated, is expected to be softened. Ultra-Orthodox parties — which are closely allied with Netanyahu’s Likud — have in the past threatened to bolt the coalition unless dramatic changes were made to the bill.

Last December, the IDF announced it had launched an investigation into the years-long inflation of enlistment numbers of ultra-Orthodox soldiers, following a report on the matter by the Kan broadcaster. According to the exposé, over the course of several years, the IDF published false information on the number of people joining the military from the ultra-Orthodox population, sometimes doubling or tripling the actual figures, making it seem as though the IDF was closer to meeting the quotas set by law than it was in reality. Masks of all kinds: Scenes from a pandemic Purim across the world