The High Court of Justice ruled on Thursday against three petitions that demanded the establishment of a state commission of inquiry into the so-called “Submarine Affair,” a massive corruption case that has ensnared a number of close associates of Benjamin Netnayahu, though not the former prime minister himself.

The justices noted that there was “improper and worrying conduct” in the case that deserves further investigation, but stopped short of ordering a government inquiry.

The scandal also involved the sale of two Dolphin-class submarines and two anti-submarine warships by Germany to Egypt, allegedly approved by Netanyahu without consulting or notifying then-defense minister Moshe Ya’alon and then-IDF chief of staff Benny Gantz. Israel had long been granted an unofficial veto over such sales by Germany.

While several of Netanyahu’s close associates have been indicted in the case, which involves suspicions Israeli officials were bribed to ensure Thyssenkrupp won the contract, the former premier has not been directly implicated and the attorney general has said he is not a suspect.

Responding to Thursday’s High Court decision, now-Defense Minister Gantz said its “criticism of the shortcomings in the process of purchasing the submarines and vessels, and the situation in which the IDF and the defense establishment were pushed aside in the decision-making process, require an in-depth examination of the issue.”

He said he will “continue to lead, together with my government partners, the establishment of a state commission of inquiry soon.”

Last week, Gantz and Justice Minister Gideon Sa’ar agreed to hold discussions on the potential of setting up a state inquiry into the affair, something Gantz has pushed for, despite opposition within the government.

The decision was seen as a rapprochement of sorts after the two engaged in a brief public spat over the issue last month, after Gantz announced his intention to have the government form an inquiry commission, reportedly without coordinating the matter with Sa’ar or Prime Minister Naftali Bennett.

Last year, Gantz announced that his ministry was launching an internal investigation of the scandal, a move that did not require external approval. However, the probe quickly fell apart, as the attorney general voiced concerns that it would interfere with his own criminal inquiry, which resulted in a number of indictments last month.

In May, prosecutors filed indictments for bribery, money laundering and tax offenses at the Tel Aviv District Court Monday against Miki Ganor, who was the local agent for Thyssenkrupp. Avriel Bar-Yosef, once Netanyahu’s pick to be head of the Israel National Security Council, was indicted for bribery and breach of trust. 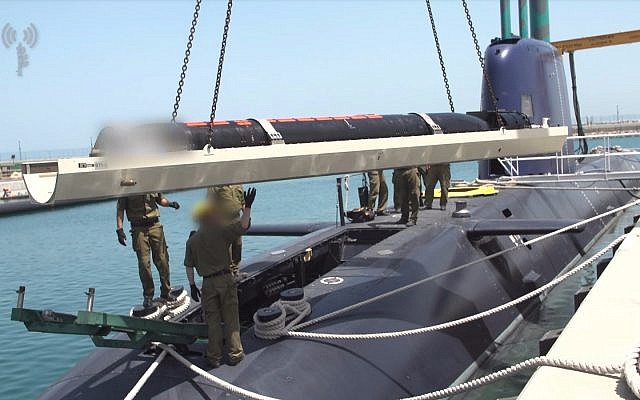 A June 19, 2018 photo of an Israeli Navy submarine being outfitted with a new smart torpedo system. (IDF Spokesperson’s Unit)