MIAMI, United States (AFP) — Just over a week before the US presidential election, conspiracy theories, racist and anti-Semitic posts and disinformation are targeting Hispanic voters in Florida, a key constituency in the battleground state.

A purported election fraud concocted by Democrats, an alleged plot among Jewish, Black and LGBTQ people to interfere in the election: these are some of the stories that have spread among voters in the United States, and among Florida Latinos in particular.

“All registered to vote Democrat!” she wrote in Spanish. “Will there be fraud November 3? Are we playing dumb? Vote in person!”

There is no evidence that the licenses were linked to the Democratic party or to voter fraud. And US Customs and Border Patrol (CBP) spokesman Steven Bansbach told AFP that CBP could only confirm that 19,888 driver’s licenses — mainly from China and Hong Kong — were confiscated.

Lizette Escobedo, director of civic engagement at the NALEO Educational Fund, a nonprofit that promotes political participation of Latinos, said that mistrust in the electoral system is common among Florida Hispanics in both parties.

The problem, she explained, is that “many Latinos don’t actually trust the electoral process. They’re afraid that their votes are not going to count.”

The organization seeks to counter this perception at the national level with voter education campaigns.

“Florida is our largest digital ad buy budget that we have for this election,” Escobedo said.

She said that Latinos are particularly vulnerable to disinformation because they define their positions in the American political system “based on the political systems that they have in their home country.”

Latin America has a long history of authoritarian regimes from both the left and right, often sustained by elections flagged as fraudulent.

Last month, US representatives Debbie Mucarsel-Powell and Joaquin Castro asked the FBI to investigate the spike in disinformation directed at Latinos in South Florida and to “consider efforts of foreign actors to spread disinformation” in this regard.

Many of these conspiracy theories favor Trump, who is head-to-head with Democrat Joe Biden in Florida, a crucial state in the November 3 election.

Hispanics in Florida make up 17 percent of a 14 million voter electorate.

Biden, the Jewish community, and African Americans have been the subject of disinformation.

In September, local newspaper El Nuevo Herald — the Spanish version of the Miami Herald — had to remove the weekly Libre insert aimed at Cubans in Florida after a reader protested its anti-Semitic and racist content. 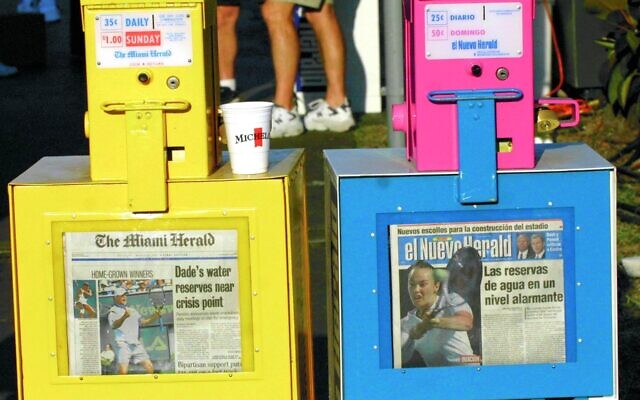 The Miami Herald and its el Nuevo Herald are sold in Miami. (Art Seitz/Gamma-Rapho via Getty Images)

A Cuban columnist had written in the insert that the police protests were “racial prostitution” and that Jewish Americans were “cowards” for supporting Black Live Matters.

In another instance, Miami’s Radio Caracol 1260 had to apologize in August after state senator Annette Taddeo called out a paid segment in which the announcer predicted “a dictatorship of Jews and Blacks” if Biden won the presidency.

She added: “All of us-regardless of party affiliation-have an obligation to repudiate & condemn this pro-Nazi and racist message!”

‘If Biden wins the presidency, USA will be a dictatorship of Jews and Blacks.’

All of us-regardless of party affiliation-have an obligation to repudiate & condemn this pro-Nazi and racist message!

According to the public radio WLRN, Moncada told listeners that Black Lives Matter practices “‘lo negro’ — witchcraft and devil worship — and wants to burn down your property and kill police officers.” She then added that a vote for Biden “supports that rape and anarchy.”

On her Facebook, Moncada reposted and translated an article from News Punch, an outlet known for disinformation, which claimed a co-founder of BLM practices witchcraft because activist Patrisse Cullors said in an interview that her movement was “spiritual.”

“These kinds of barbarisms are said constantly,” Roberto R. Tejera, a journalist and host on the same station as Moncada, told the Sun Sentinel. “It’s sort of the daily bread of Spanish radio.”