The Holon city architect on Monday urged residents to inspect their buildings and alert the city if there is a problem, following the dramatic collapse of a 32-family building just hours after it was evacuated.

Speaking to Israel Radio, Aviad Mor, who is also acting city engineer, said the municipality was not planning to carry out widespread inspections even though other buildings could also be in danger of collapsing, saying it was the responsibility of residents to determine if there was a problem.

“The city will not be inspecting nearby buildings unless there is a specific request from residents,” Mor said. “There are limited resources for regular inspections of dangerous buildings. The cooperation of residents is paramount.”

“I want to draw the attention of citizens — it’s your property,” Mor said, comparing it to annual vehicle safety inspections.

The city policy comes despite a call from State Comptroller Matanyahu Englman to draw up a comprehensive plan to deal with the risk of further collapses.

“This needs to be a warning sign to us,” said Englman, who toured the site on Monday. “There are lots of dangerous buildings and we need to find solutions.”

The scene of a building collapse in Holon, September 13, 2021. (Avshalom Sassoni/Flash90)

Mor said the building collapsed due to the apparent failure of a central support column and noted that the building was built decades ago.

First responders were called to the building on Saturday after residents reported hearing the sound of a blast. Images showed cracks on the walls of the building and police said residents were unable to open the front doors of their apartments.

The decision to evacuate the building was made in coordination with professional engineers, police said at the time, with officers closing off the street outside the building and police urging people to stay away.

A day later the building, on Serlin Street in the central Israel city, collapsed, reflecting how close the situation had been to becoming a mass-casualty disaster resembling the collapse in June of a high-rise residential building in Florida, which killed 98 people.

Despite the city’s lack of resources, Mor said Holon would help pay for the plans to rebuild the building.

“We are acting on the orders of the mayor to move forward with an ad hoc demolish and rebuild plan, funded by the municipality,” Mor said. “With the tools we have, we will do the planning, and due to our abilities and experience, we will expedite the planning.”

Mor also responded to complaints by the evacuated residents that the city was not doing enough to help them after they lost all their possessions.

“We are giving the residents all that we can under the law as a first response,” he said. The city announced it was giving each family an immediate initial assistance package of NIS 5,000 ($1,500). 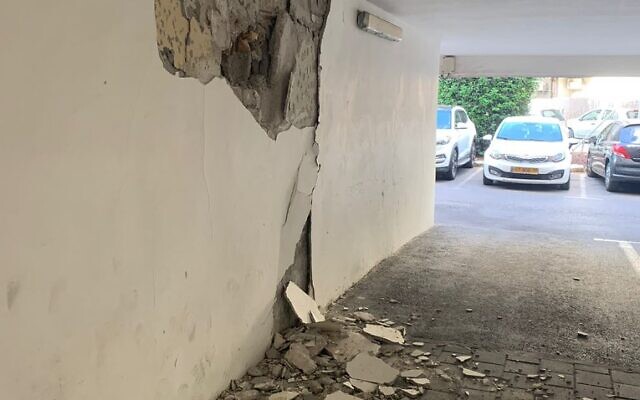 Cracks are seen in the side of an apartment building in Holon that was evacuated over fears it could collapse, September 11, 2021. (Fire and Rescue Services)

But residents said it was not enough.

“We are asking that the mayor help us. We are families left with nothing, homeless,” resident Hagit Levin told the Ynet news website. She said she and her daughter are now sleeping on her brother’s couch.

“How long can we be like this? It is not clear how long it will take until there is a solution,” she said. “We don’t know what to do.”

Another resident, Naor Navon, a married father of two, said: “We look at these ruins and understand that our lives have collapsed with the memories from our home and our belongings. We have been left in the street and we have nowhere to go.”

In the meantime, Navon and his family are staying in a hotel.

“The municipality provided us with a shameful solution. They opened a community center with mattresses on the floor and sleeping bags — they expect 32 families to live there without a shower and with one toilet? It is a disgrace,” he said. “We don’t know what will happen and when we will have a home again.”

Another resident, identified only as Chen, told the Kan public broadcaster that the evacuated residents include Holocaust survivors, a cancer patient, and a mother with a 1-month-old baby.

“We have no idea how this happened, we don’t know anything,” Moran Konfino, a resident who lived in the building for 15 years, told Channel 12 news. 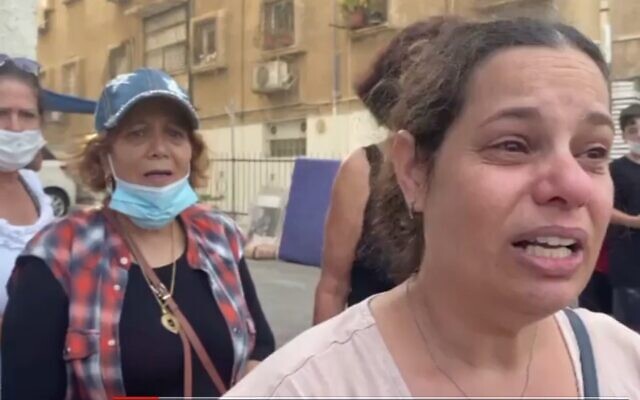 Moran Konfino, resident of a Holon building that collapsed on September 12, 2021 (Channel 12 screenshot)

“If they would at least say something to us, but they are not saying anything,” she said. “We are in the dark. Why can nothing be said to us? What is going on here?”

Konfino, a mother of two, said: “I have been left with nothing. Thankfully, I am alive, but my whole life was in this home. All the photos of the children. I have no way to restore that.” 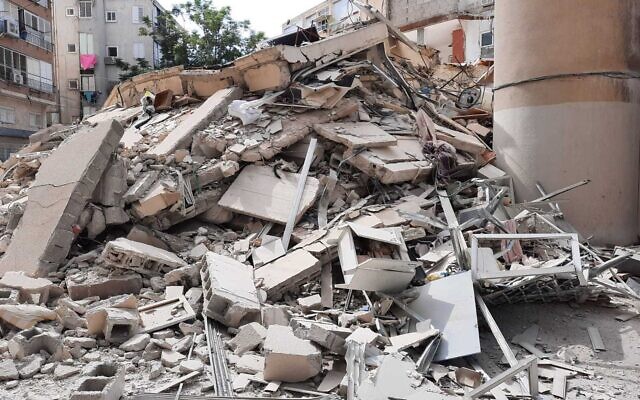 The scene of a collapsed apartment building in Holon on September 12, 2021. (Fire and Rescue Services)

The Holon municipality said in a statement Sunday that municipal social workers had attended to the families during the day, providing them with food and drink.

“Most of the families were evacuated to relatives and the rest were offered to move to an apartment in a hotel for a reduced price or to a temporary installation that the municipality opened in one of the community centers,” it said.

The options were designed to give “initial care until their living arrangements are organized,” the municipality said. “With full understanding of the complicated situation of the residents, the municipality cannot provide residential apartments or fund hotel stays.”