President Reuven Rivlin hosted an annual Independence Day ceremony at his official residence for his last time on Thursday to award the army’s annual citations for distinguished service to 120 Israel Defense Forces soldiers and officers from a diverse set of units in the military.

The annual event at the President’s Residence sees Israel’s leaders hand out commendations of excellence to troops, while reminiscing about their own military service.

The Independence Day event began at 9:30 a.m. and was attended by IDF Chief of Staff Aviv Kohavi and other current and former senior military figures.

“As a kid, I grew up in the days when we had no country. For me Israel[‘s existence] was not a given,” Rivlin told the soldiers as he recalled the 73 years of Israel’s history. “For the younger generation today, the powerful and strong State of Israel, innovative and prosperous, groundbreaking and happy, is an existing fact.”

President Reuven Rivlin (C-R) with IDF Chief of Staff Aviv Kohavi (C-L) during an event for outstanding soldiers as part of Israel’s 73rd Independence Day celebrations, at the President’s Residence in Jerusalem on April 14, 2021. (GPO)

“But our internal building, the work on our nation and society, has not ended yet,” he said.

The Independence Day ceremony was Rivlin’s last as president, as his tenure ends this summer.

“I am touched to stand before you today for the last time as president. On this Independence Day, you give us 120 reasons to be proud,” he said, adding that “even if it appears we as a nation are struggling to agree on the path, we have not lost our direction,” likely referring to the political deadlock which has left the country without a stable government in over two years.

Chief of Staff Aviv Kohavi also appeared to note the divide in Israeli society, saying, “The digital revolution that brought great blessings to the world, also carries with it unplanned consequences. One of them is the splitting of society into many echo chambers, in which we are repeatedly exposed to those similar to us, to the tribes.”

“The new digital tribes, full of anger, not facts, are [causing] the cohesion of many societies around the world to crumble, and are threatening to do the same in Israel,” Kohavi said.

Kohavi also told the soldiers: “Each and every one of you is a pioneer in your domain. You were chosen because ‘good’ and ‘very good’ are not enough for you.”

Rivlin also posted photos of each of the honored soldiers on his Facebook page — albeit with avatars instead of actual portraits for those whose military duties are classified, usually indicating service in elite units. Of the 28 soldiers whose identity remained under wraps, eight are women.

Independence Day celebrations began on Wednesday night with an official torch-lighting ceremony at Mount Herzl in Jerusalem and will continue throughout Thursday.

Another staple of Independence Day celebrations, the annual Bible Quiz competition finals, was slated to take place after the presidential ceremony.

Hundreds of thousands of Israelis are expected to visit national parks and museums throughout the day, after coronavirus restrictions were significantly relaxed.

Meanwhile, the hallmark flyovers of combat planes and helicopters began over the country’s skies at 10:30 a.m. Flyovers by the Air Force are a popular feature of the day, especially on the Mediterranean beaches, where families bring folding chairs and barbecues to watch the show. 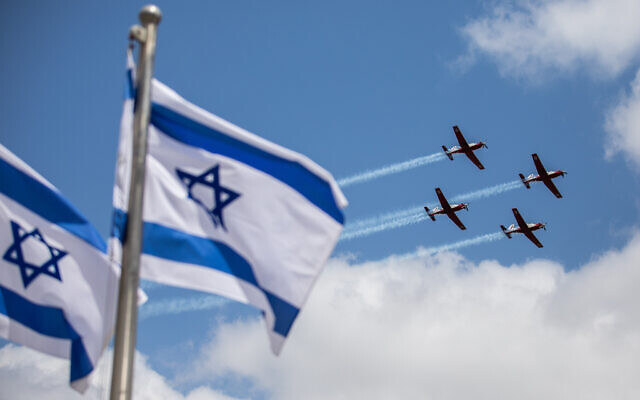 Municipalities are permitted to hold Independence Day celebrations for the vaccinated. In locales with limited risk of infection, depending on the size of the venue, up to 3,000 vaccinated people are allowed to gather indoors and 5,000 outdoors.