There has been a minor improvement in the condition of an 11-year-old boy who was seriously injured in the stampede at Meron, the Rambam Medical Center in Haifa announced on Saturday.

A spokesperson for the hospital said the child was sedated and put on a ventilator when he arrived at the medical center on Friday, but has now regained consciousness. His condition has been upgraded to moderate, they said.

The boy, who wasn’t named, is from the central city of Bnei Brak.

The hospital said three other people injured in the crush remained in their intensive care unit and were still sedated and on ventilators. Those injured in the stampede were taken to a number of hospitals around the country.

With 45 dead and dozens injured, the disaster in the early hours of Friday appeared to be one of the worst peacetime tragedies in Israel’s history, surpassing the death toll of 44 from the 2010 Mount Carmel forest fire. 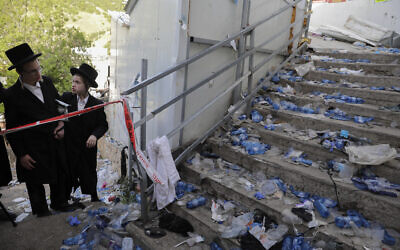 Ultra-Orthodox Jews at the scene of a deadly stampede during Lag BaOmer festival at Mt. Meron in northern Israel, April 30, 2021 (AP Photo/Sebastian Scheiner)

A bonfire lighting ceremony for the Toldot Aharon Hasidic sect was being held at the pilgrimage area, close to Bar Yochai’s tomb.

As the dense crowds began to exit, some apparently slipped on the walkway, falling on those below and precipitating a stampede and fatal crushing, exacerbated by a reported police barrier at the bottom of the incline.

As the initial shock and horror over the deadly crush began to subside, focus started to turn on Friday toward the matter of who was to blame for the packed conditions at the site that led to the deaths of 45 people and the injuring of dozens of others in the fatal stampede.

Stark questions will likely be directed at political, civil and law enforcement officials involved in planning, approving and securing the event, amid talk of a potential state commission of inquiry to thoroughly investigate the disaster.