The family of a young Israeli woman who died of heart inflammation after being vaccinated against COVID-19 has blamed the hospital where she was treated for her death.

However, Hilel’s condition worsened and she began to have difficulty breathing and pains in her chest and was taken to Safed’s Ziv Medical Center.

At the hospital, Hilel was diagnosed with myocarditis, inflammation of the heart muscle, which boyfriend Eyal said the doctor compared to a swollen shoulder.

“I said okay, three, four days or a week. I’ll be with her as much as needed,” he said.

According to the network, there have been other cases of myocarditis among Israelis who received both vaccine shots, but all had been successfully treated, including patients in more serious condition than Hilel.

Hilel was eventually taken to the cardiac care unit, where her family asserted she was not sufficiently watched over by hospital staff.

“I looked at the monitor, I saw the breaths. The monitor was beeping and no one approached,” Nofar Hilel said.

“I got ready so quickly and said, ‘I’ll go up [to the hospital] to see what we can save.’ Five minutes later they called to say she died,” Nofar said.

She added: “She just deteriorated before their eyes and no one, just no one even lifted a hand and said, she isn’t receiving care.”

A lawyer for the family said Hilel’s relatives intend to take legal action against the hospital.

“On the last day of hospitalization, a deterioration in her situation began. Persistent heart rhythm disturbances developed that didn’t respond to care and after continued resuscitation, she was pronounced dead. We share in the sorrow of the family over the heavy loss,” it said in a response to the network. 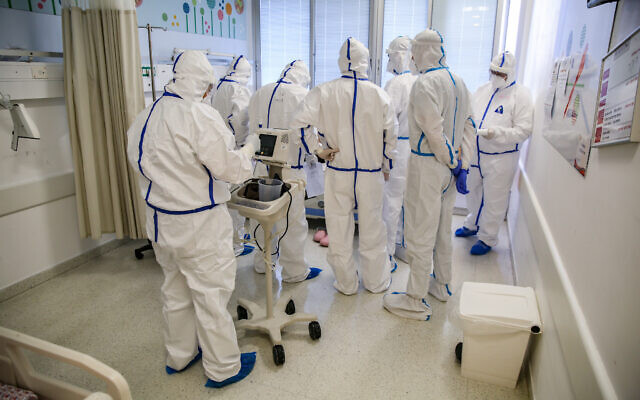 Illustrative: Medical staff in the coronavirus ward of Ziv Medical Center in the northern city of Safed, on February 4, 2021. (David Cohen/Flash90)

Last month, the Health Ministry instructed hospitals to report any cases of heart inflammation among the vaccinated.

“After several such cases of this type happened close to receiving the vaccine, it was decided to put a specific focus on this issue,” Tal Brosh, head of the Infectious Disease Unit at Assuta Medical Center in Ashdod, told the Ynet news site at the time.

He stressed it remained unclear if there was any direct connection between the cases of heart inflammation and the vaccine.

According to the latest Health Ministry figures, 5,252,718 Israelis have received at least one vaccine dose and 4,804,891 have gotten both shots.