There are more than a few tales about captives breaking out of prisoner of war camps, but none are quite like the one recounted in Margalit Fox‘s new book, “The Confidence Men.”

In the depths of World War I, British officers Elias Henry Jones and Cedric Waters Hill escaped the brutal conditions of an Ottoman POW camp in a remote area of Turkey. They didn’t dig, blast or fight their way out. Instead, they used a homemade Ouija board.

For those unfamiliar with a Ouija (pronounced wee-jee) board, it is a popular mysterious “talking board” that purportedly puts one in contact with the spirit world. You can pick one up at your local toy store, or order one from a number of game manufacturers at Amazon.com for $20 or less.

Fox, 60, learned of this amazing bit of history when a few years ago she stumbled upon Jones’s 1919 war memoir, “The Road to En-Dor.” The book takes its title from the biblical narrative about King Saul consulting a magical woman in En-Dor in an attempt to contact the dead prophet Samuel.

Fox was compelled to dig further into Jones and Hill’s story to reveal how they succeeded in pulling off such an improbable caper.

“[It was] the writer’s gut, the hair stands on end, the back of the neck prickles —this is jaw dropping,” Fox said in explaining her initial reaction to Jones’s account.

“I did my research and saw that no one had written about this since Jones’s memoir came out a hundred years ago,” she said.

Jones had written in detail about the intricate, step-by-step schemings of his and Hill’s escape, which eventually led them home to Britain shortly before the end of the war in 1918. However, Fox, who had a 24-year career as an obituary writer for The New York Times before leaving in 2018, was more interested in explanation than exposition.

“How in the world was this preposterous plan able to succeed?” Fox asks in her introduction to “The Confidence Men.”

Fox took advantage of a century’s worth of research to help her understand how spiritualism gripped people in many parts of the Western world in the late 19th and early 20th centuries, and how magicians and con artists psychologically manipulate their audiences and marks.

“A rationalist would say I found [this story] entirely by happy accident, and a spiritualist would say it was ordained from the world beyond — so take your pick!” Fox said. 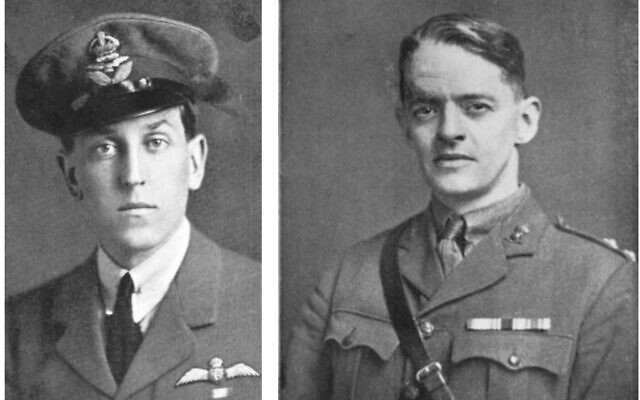 Jones and Hill were an unlikely pair, but it was their complementary skills and talents, as well as their strong friendship that enables them to not only pull off their con, but also survive the war. This devotion to one another was critical at the end of their scheme, when a fake suicide attempt nearly turned real. That harrowing incident was followed by by six excruciating months shamming insanity under close scrutiny at a Turkish mental hospital in Constantinople.

Jones, an Oxford-educated lawyer and son of a lord, was captured after a five-month siege at Kut, and then force marched 2,000 miles over two months to the POW camp in Yozgad. There, he met Hill, a mechanic and amateur magician from an Australian sheep farm, who joined the Royal Flying Corps. Based in Kantara, Egypt, Hill flew reconnaissance missions and was captured by Ottoman forces after being shot down near El Arish in the Sinai desert. From there he was trekked to Beersheba and then sent on to the Yozgad camp via Damascus. 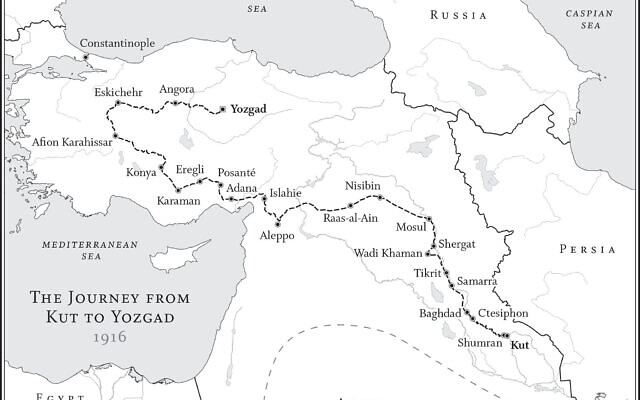 Map of march of British and Allied prisoners of war from Kut to Yozgad, 1916. (Jonathan Corum)

“The Confidence Men” is full of intrigue and adventure, as well as heartache. Fox uses the many colorful characters (conjured and real) to flesh out the story and move the fast-paced plot along. Among these characters is Moïse Eskenazi, a young Ottoman Jew of short stature who served as the translator at the Yozgad camp, and whom the inmates called “The Pimple.” Among all the individuals Jones and Hill hoodwinked— fellow Brits and Turkish captors alike — it was the Pimple who fell the hardest for their ruse.

The Times of Israel recently interviewed Fox from her home in New York. We asked her why she thought this incredible story fell out of public consciousness, what lessons people today can learn from it today, and about the importance of the Pimple.

This interview has been edited for brevity and clarity.

The handmade Ouija board used by Jones and Hill in their early séances. It would ultimately lead them to freedom. (Jones, ‘The Road to En-Dor,’ 1919)

Why do you think that so few people have heard about this amazing escape story? It would make for a great movie!

Many people on both sides of the conflict were taken captive in World War I. Some of them escaped, and some even wrote memoirs about it. Yet, it has kind of gotten lost, slipped into a crevice in history.

Jones’s book, to the best of my knowledge, was not published in [the US] when it came out in 1919. It had a couple of editions right away in 1919 and 1920, but only in Britain. It didn’t get much or any publicity on our side of the Atlantic.

This particular story was double marginalized by history by it having taken place during World War I instead of World War II, and by the fact that it took place in the Ottoman theater and not on the western front.

The World War I escape genre may not has been as seductive for Hollywood because [with it] we don’t have the Nazis, who are emblematic, readily identifiable villains, who for dramatic purposes become very easy to slot into the arch-fiend role — which indeed they were. 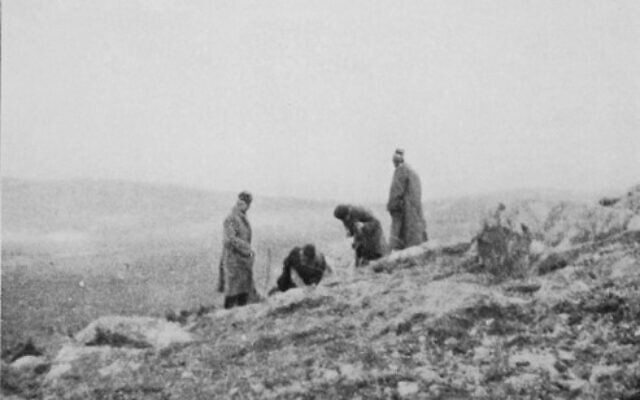 The only surviving photo of the search for the first clue in Jones and Hill’s ghostly treasure hunt. Left to right: Kiazim, Jones, the Pimple, and the Cook. (Jones, ‘The Road to En-Dor,’ 1919)

Jones and Hill suffered greatly during their escape — especially as they faked insanity in the Turkish hospital under the watch of one the world’s top psychiatric authorities. In your research, did you come across any mention of regret on the men’s part for putting themselves through all this?

The insane asylum was truly insane. They expected to be there shamming madness under constant surveillance 24/7 for maybe six weeks. They ended up there for six months. It very nearly killed them, or very nearly drove them mad.

But nowhere in their writings have I seen one note of regret. Some of that is of course the British stiff upper lip, not complaining about your lot. But they clearly say it in so many words that this [scheming] kept them alive. I think genuinely they did not have a moment of regret. That is not to say that what went through wasn’t terrible. 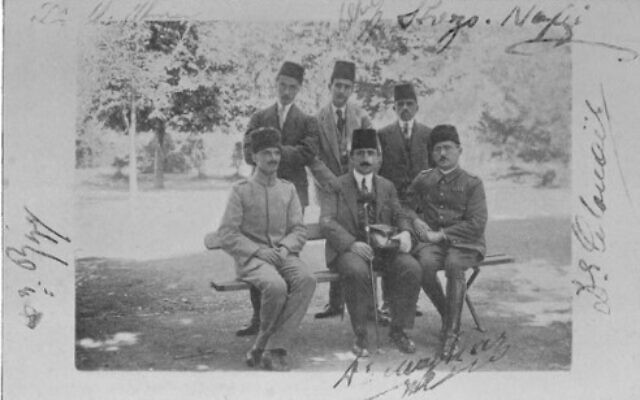 The doctors of the ‘mad ward’ at Haidar Pasha Hospital. Mazhar Osman Bey, ‘the greatest authority on mental diseases in Eastern Europe,’ is seated front row center. (Jones, ‘The Road to En-Dor,’ 1919)

Were you able to find out much about the Pimple? Do you know where he was from and what his family background was?

We don’t know much about him. Because of the pandemic, and because it is very unlikely that 100-year-old military records would have been preserved in Turkey, it was sadly impossible for me to do research in Turkey for this book.

We know that he was a young Ottoman Jewish soldier of about 20 when the war started. He was very good with languages and was the Yozgad POW camp interpreter. He spent a number of years as a teenager studying in Paris. My best guess is that he was native to Turkey, because Turkish was his best language, and probably his native one. 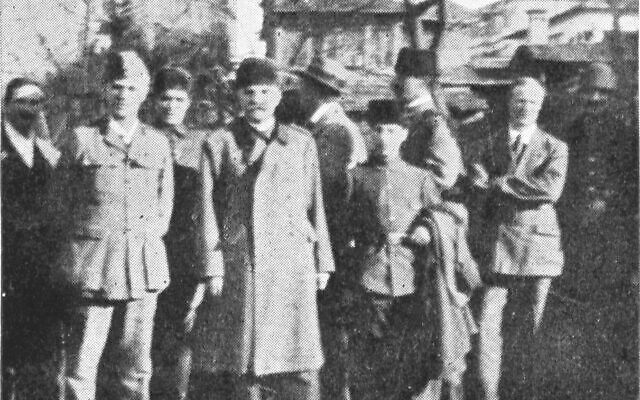 There are a couple of things I love about the Pimple. He provides the comic relief for the book. He was the first of the captors to be converted to the sham spiritualism of Jones and Hill. He became this almost boyishly enthusiastic convert. There is all the hilarious physical comedy around the Pimple.

What I really appreciate about the Pimple is that of the captors, he is the one who truly redeems himself. He becomes much more sympathetic, and because he is such a comedic figure, he is even likable. I think Jones and Hill developed a sort of grudging affection for him.

It’s clear that although the Pimple wrote several letters to Jones after the war, Jones didn’t want to maintain contact. Jones never lost sight of the fact that they were enemy combatants. 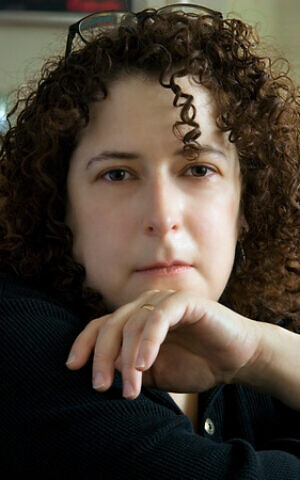 Despite the British officers having come to like the Pimple, you made sure to add a key footnote in your book. It is a quote from Jones in which he uses antisemitic buzz words in reference to the Pimple, such as “cosmopolitan,”  “ambitious,” and “having a high opinion of himself.”

Jones’s attitude toward the Pimple, as expressed in his book, are of a piece with his time, place and class, and make disturbing reading today. I am very fond of Jones. He’s this young, handsome hero, and he’s obviously very smart, very charming, with a puckish sense of humor. But then when you read the things he says about the Pimple… It was very disturbing for me to read as a 21st century Jewish writer, but that stance of Jones’s has to be acknowledged. People are complex creatures. This is something that certainly doesn’t hold up well over the passage of 100 years.

Part of me wants to say I’ll leave it up to the readers, but in truth, having come through four years in this country (2016-2020) of the most pervasive, pernicious and terrifying mass popular delusions — which can now be instilled at warp speed via Twitter and other social media — I do think it is more urgent than ever to look at the central, larger questions of “The Confidence Men,” which are how does a master manipulator instill and perpetuate false belief, and what is it psychologically that is so seductive in making legions of people persist in holding false beliefs in the face of clear evidence to the contrary.