In the 1940s, Siegel poured the Mob’s millions into what seemed like a quixotic scheme. He was convinced that the sleepy town in the Nevada desert would someday become a glamorous gambling center. To make that dream a reality, he and his Mob-connected girlfriend, Virginia Hill, built a casino hotel called the Flamingo that would rival anything in Monaco. Yet costs ballooned, and his gangster associates suspected him and Hill of skimming funds. On June 20, 1947, the 41-year-old Siegel was gunned down in Hill’s Los Angeles apartment. The carnage left his eyeball spattered on the wall.

Siegel is the subject of a new book by Vanity Fair contributing editor Michael Shnayerson — “Bugsy Siegel: The Dark Side of the American Dream,” part of the Jewish Lives series from Yale University Press.

“On some level, Ben did want to be a good Jew, and I would dare say he hoped he might put his life of crime behind him and be a practicing Jew for the last years of his life,” Shnayerson wrote in an email. “He just never had the chance.”

Siegel’s life was dramatized in the 1991 Warren Beatty film “Bugsy,” starring Beatty in the title role and Annette Bening as Hill.

Maybe, he speculates, the still-married Siegel found his match in Hill because both were born into poverty, Hill in Alabama and Siegel on the Lower East Side.

“You get that background,” Shnayerson said of Siegel’s tenement roots. “You have a better appreciation of why Ben became the street tough he did become, how it led to serious crimes.”

Siegel is the first gangster to be chosen as a subject for the Jewish Lives series among its 50 titles to date.

All of the previous volumes were about “some admirable people,” Shnayerson noted, “Supreme Court justices or scientists.”

Yet, he said, “Jewish gangsters were part of the Jewish-American experience in the late 19th and early 20th centuries,” including Siegel, his lifelong friend and partner in crime Meyer Lansky, and their Prohibition-era mentor, Arnold “The Brain” Rothstein, who allegedly inspired the fictional mobster Meyer Wolfsheim in F. Scott Fitzgerald’s classic novel “The Great Gatsby.” 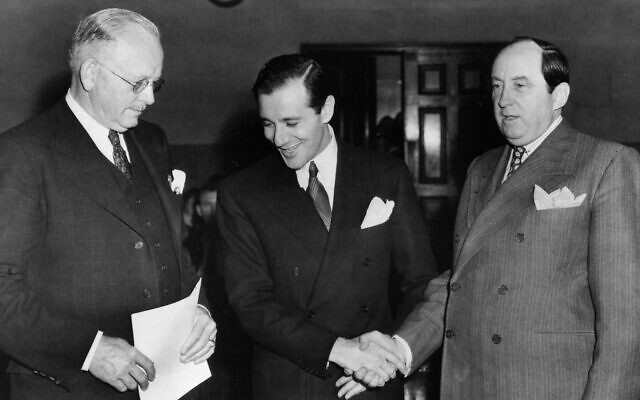 Shnayerson was raised Protestant but converted to Judaism seven years ago when he married his wife, Gayfryd Steinberg.

“I hadn’t imagined that converting might make me a more appropriate candidate to write a book about Jewish gangsters,” he reflected wryly. “But such [are] the coincidences that guide our lives, right?”

In another turn of events, one of Shnayerson’s previous books is a 2015 biography of New York governor Andrew Cuomo. Following the recent allegations of sexual harassment and abuse against Cuomo, Shnayerson wrote a Vanity Fair article based in part on his notes from the book — including that during Cuomo’s divorce from Kerry Kennedy, “there was an awful lot of tension between them. Kennedy spent more than one night living in her bathroom.” 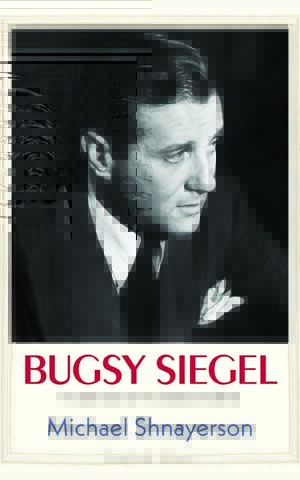 Shnayerson added, “For three days afterward, I was fielding calls from TV news shows all over the world, all wanting to talk about Andrew Cuomo.”

Another previous book led Shnayerson to the Siegel project. Shnayerson learned about the mid-20th-century world of casinos when he co-wrote a book on Harry Belafonte with the famed singer-actor. This led him to the opportunity to write about Siegel for Jewish Lives.

Shnayerson interviewed Siegel’s granddaughter Wendy Rosen and read about the subject matter, including two books with memorable titles — “Tough Jews: Fathers, Sons, and Gangster Dreams” by Rich Cohen; and “But He Was Good to His Mother: The Lives and Crimes of Jewish Gangsters” by Tel Aviv University history professor Robert Rockaway.

Shnayerson even located the ship’s manifest of the SS Etruria, which brought Siegel’s parents, Max and Jennie (Riechenthal) Siegel, from Galicia to the US in 1900. They joined countless fellow Jews in Lower East Side tenement life. Max Siegel worked as a pants presser, barely supporting the growing family of seven — including Ben, who was born in 1906.

While still a teenager, he learned to shake down local pushcart vendors. The beginning of Prohibition in 1919 led him into the larger-scale world of bootlegging, especially after he made a fateful friendship with another young tough: Lansky, a Grodno native originally named Meier Suchowlanski.

“Meyer was sort of low-key, a studious guy,” Shnayerson said. “He was not a guy who would pick up a gun and shoot you between the eyes. That was Ben. They complemented each other in a very useful way.” 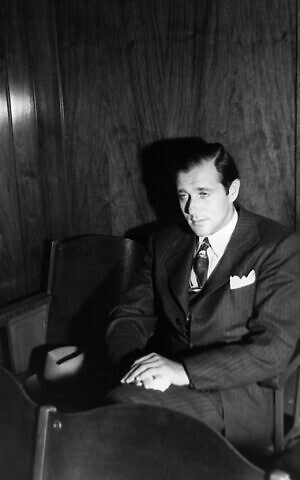 Benjamin ‘Bugsy’ Siegel is arrested in New York City, August 19, 1940, for the slaying of Harry Schacter, a chauffeur in Hollywood. (AP Photo)

Through their partnership, “the Bugs and Meyer Mob,” Siegel became rich enough to move into the Waldorf-Astoria. Yet his nickname attested to both his hair-trigger temper and his being as crazy as a bedbug, Shnayerson writes in the book.

“He was really movie-star handsome, but at the same time a really tough guy with a famous temper, an incandescent temper,” Shnayerson told The Times of Israel. “If it appeared, you were advised to exit the premises quickly.”

After Prohibition ended in 1933, Siegel took his movie-star looks to LA, where he cultivated a Hollywood-style life. He became friends with gangster-turned-actor George Raft, star of the hit crime film “Scarface,” and unsuccessfully sought a film career himself. His day began with a full grooming at Drucker’s barbershop, continued with visits to the racetrack in expensive, monogrammed suits and ended at the sprawling mansion he built for himself and his family — wife Esther (Krakauer) Siegel and their two daughters.

“Even after dinner,” Shnayerson said, “[Siegel would] take an eye mask on his face to be sure there were no lines in his complexion. He was very vain.” 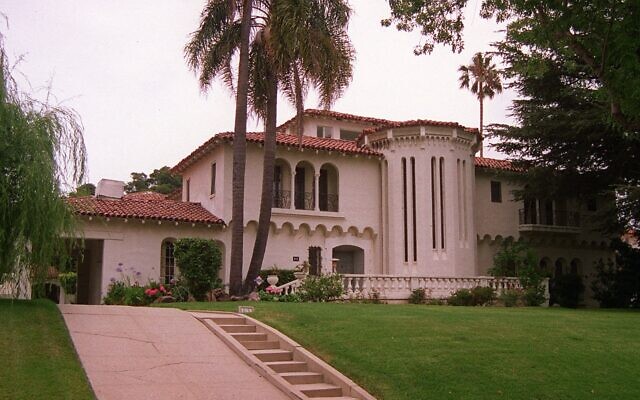 This is an exterior photo on June 14, 1997, of the home where, according to sources, Benjamin ‘Bugsy’ Siegel was murdered in Beverly Hills, California, on June 20, 1946. (AP Photo/Michael Tweed)

Siegel’s liaisons included one with Dorothy Di Frasso, an American heiress who married into the Italian nobility. In 1939, Siegel and the Countess Di Frasso visited Mussolini to pitch a soundless explosive that Il Duce rejected after it did not work. The visit was reportedly in the presence of at least one infamous Nazi — Hermann Goring — that Siegel later regretted not killing after learning about the Holocaust. He also donated tens of thousands of dollars toward Israeli independence through meetings with Zionist diplomat Reuven Dafni. 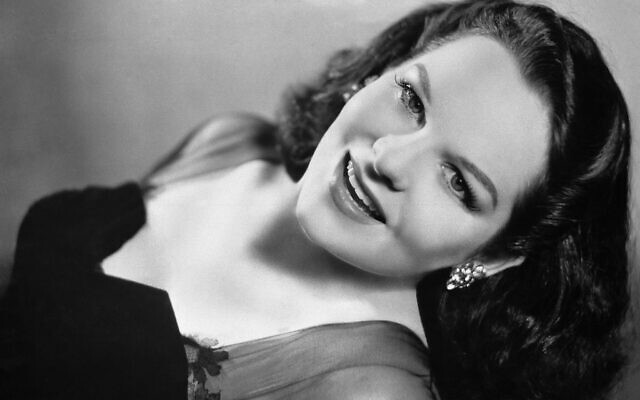 The gang-style slaying of Benjamin (Bugsy) Siegel on June 20, 1947 took place in a palatial Beverly Hills, California, residence leased by wealthy and active Virginia Hill, pictured here, well-known film colony for her lavish parties. She was en route to Paris or already there when the killing occurred. (AP Photo)

Yet there was a dark side to Siegel, as the book notes in its subtitle. He held himself responsible for 12 deaths, including Tony Fabrazzo, a mobster he gunned down in front of Fabrazzo’s father. Siegel was part of the infamous Murder, Inc. syndicate that left a death toll estimated at 400 to almost 1,000. He was also charged with rape by a former acquaintance who withdrew her accusation.

“No doubt, he did kill a lot of men as he worked his way up the crooked ladder,” Shnayerson said.

The last rung on that ladder was Las Vegas, which legalized gambling in 1931. 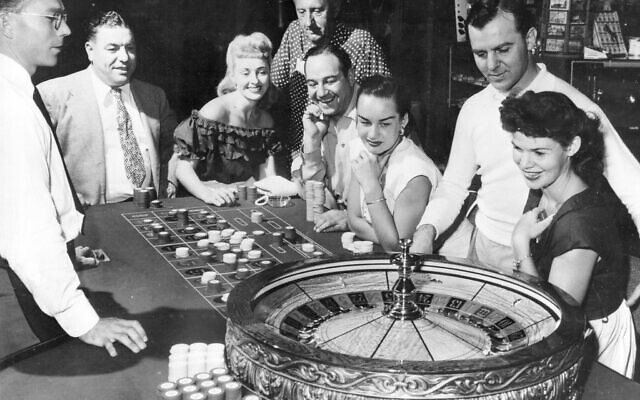 People are shown at one of the gaming tables at the Flamingo Casino in Las Vegas, Nevada, May 24, 1955. (AP Photo)

“It was the big turning point year in Nevada,” Shnayerson said. “You could get married, get a quickie divorce, gamble. It all happened in that one year.”

Siegel became a business partner in a venture to build a glamorous casino called the Flamingo. Shnayerson said that Hill was its namesake, perhaps through her rosy complexion while tipsy. Yet Siegel failed to see that his work crews were fleecing him. As costs rose by $5 million, his Mob backers soured on further support, suspecting him, Hill or both of skimming funds. In December 1946, as the Flamingo opened to a lackluster reception, a group of mobster associates — including Lansky — fatefully convened in Havana. 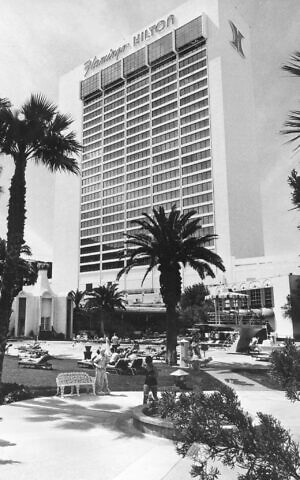 This is an aerial view of the Flamingo Hilton Hotel in Las Vegas, Nev., in 1979. (AP Photo)

“Essentially, at that meeting in Havana, the gangsters decided either Ben was going to make good on all the money he’d blown or he was going to be killed,” Shnayerson said.

The first half of 1947 witnessed numerous ups and downs for Siegel. His father, Max, died early that year. Hill left on a mysterious trip to Paris, where she reportedly brought 75 fur coats despite going in the summer. On a positive note, the Flamingo began turning a profit, and when Lansky came to visit, Siegel was feeling optimistic.

Instead, on the night of June 20, Siegel was shot to death with a rifle through the living-room window of Hill’s LA mansion, which she had let him use during her absence.

“That was it for Ben,” Shnayerson said. “It killed him almost immediately.”

The crime was never solved. 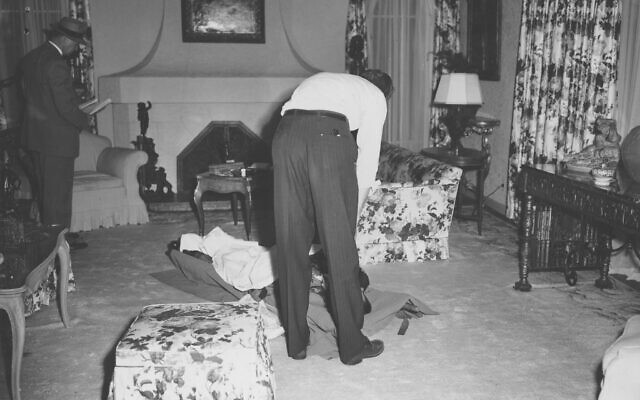 A coroner bends over the slain body of Benjamin ‘Bugsy’ Siegel after it is placed on a stretcher on the living room floor of the Beverly Hills home on June 21, 1947. (AP Photo)

“The Flamingo itself actually prospered over the next few years,” Shnayerson said. “In a sense, Ben’s vision did come true. It was a second life for Ben.”

“In the end,” Shnayerson reflected, “you have to give respect and a lot of credit for the vision to build that casino in the first place. It was the beginning of Las Vegas as we know it.”