Hundreds of left-wing activists demonstrated alongside local Palestinians against police brutality and planned evictions in the East Jerusalem neighborhood of Sheikh Jarrah on Friday afternoon.

This week saw higher turnout than usual at the weekly event, apparently spurred by the beating of Joint List MK Ofer Cassif by police officers last week. The violence drew condemnations from lawmakers across the political spectrum, who deemed it a violation of Cassif’s parliamentary immunity.

“Last week, the police ran wild, attacking me and others without any prior provocation, and they ought to pay a price for that,” Cassif told The Times of Israel on Friday.

Police have charged that Cassif had struck the police officer first, provoking the assault, although they have yet to release video evidence supporting the claim.

The Justice Ministry’s Police Internal Investigations Department, the institution charged with overseeing police conduct, announced last week that it had opened an investigation into the incident.

But Cassif told The Times of Israel he was skeptical the investigation would lead anywhere, charging that Internal Investigations was biased in favor of “settler-terrorists.”

“We hope that the noise around the violence will move the relevant authorities to act, but I can hardly say that I’m sure about the matter,” Cassif said.

A police officer scuffles with Ofer Cassif, a Jewish member of the predominantly Arab Joint List party, during a demonstration in East Jerusalem on April 9, 2021 (AHMAD GHARABLI / AFP)

This Friday’s demonstration briefly turned aggressive, with confrontations between protesters and new Jewish residents in homes formerly inhabited by Palestinian residents. Protesters banged on the doors to some of the homes, with curses flying back and forth.

One local Jewish resident sought to scuffle with demonstrators before being grabbed by police, who ushered him away from the scene.

The evictions in Sheikh Jarrah and the accompanying protests have been ongoing for years. According to the left-wing nonprofit Ir Amim, some 600 eviction files — including 75 Palestinian families’ homes in Sheikh Jarrah  — are currently being examined by the Justice Ministry.

Jewish would-be residents and their allies, such as the right-wing Ateret Cohanim group, argue that they are extending the Jewish presence in Israel’s capital through legal means and restoring property previously owned by Jews. 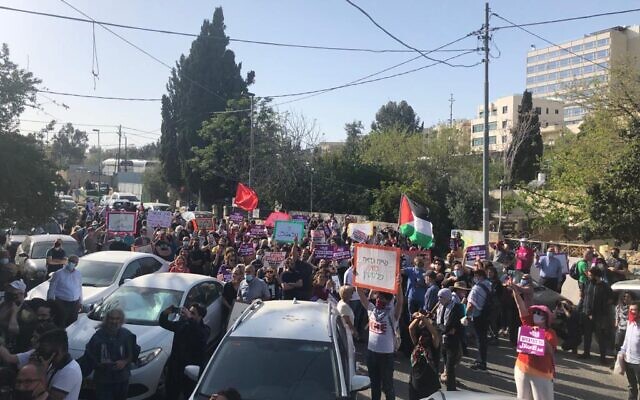 Hundreds of Palestinians and left-wing Jewish activists demonstrate against the eviction of Palestinian residents from Sheikh Jarrah in East Jerusalem on Friday, April 16, 2021 (Aaron Boxerman/The Times of Israel)

The spread of small communities of Jewish homes in East Jerusalem is not limited to ones acquired through evictions. It is also conducted through legal purchases from Palestinian owners.

“A new light in Zion continues to shine. God is building Jerusalem through his faithful emissaries, pioneers of the Ateret Cohanim association,” Religious Zionism MK Bezalel Smotrich tweeted last week, after one such purchase.”More children to play in the streets of the Holy City and more voices of redemption and building the land.”

“This is ethnic cleansing and expulsion at the barrel of a gun,” former Palestinian Authority Minister for Jerusalem Affairs Hatem Abd al-Qadir, an East Jerusalem resident, told The Times of Israel at Friday’s protest.