NEW ORLEANS, Louisiana (AP) — Rescuers set out in hundreds of boats and helicopters to reach people trapped by floodwaters and utility crews mobilized Monday after a furious Hurricane Ida swamped the Louisiana coast and made a shambles of the electrical grid in New Orleans and beyond, in the sweltering, late-summer heat.

One of the most powerful hurricanes ever to hit the US mainland weakened into a tropical storm overnight, as it pushed inland over Mississippi with torrential rain and shrieking winds, its danger far from over.

Ida was blamed for at least one death — someone hit by a falling tree outside Baton Rouge — but with many roads impassable and cellphone service knocked out in places, the full extent of the storm’s impact was still coming into focus.

Officials warned that it could be weeks before power is fully restored.

The hurricane “came in and did everything that was advertised, unfortunately,” Louisiana Gov. John Bel Edwards said.

All of New Orleans lost power right around sunset Sunday, as the hurricane blew ashore on the 16th anniversary of Katrina, leading to an uneasy night of pouring rain and howling wind.

When daylight came, streets were littered with tree branches and some roads were blocked. While it was still early, there were no immediate reports of the catastrophic flooding city that officials had feared.

New Orleans firefighters assess damages as they take photos and look through debris after a building collapsed from the effects of Hurricane Ida, August 30, 2021, in New Orleans, Louisiana. (AP Photo/Eric Gay)

“Lucky the whole thing didn’t fall inward. It would have killed us,” he said.

The governor’s office said over 2,200 evacuees were staying in 41 shelters, as of Monday morning, a number expected to rise as people were rescued or escaped from flooded homes. Christina Stephens, a spokesperson for the governor, said the state will work to move people to hotels as soon as possible so that they can keep their distance from one another.

“This is a COVID nightmare,” Stephens said, adding: “We do anticipate that we could see some COVID spikes related to this.”

Interstate 10 between New Orleans and Baton Rouge — the main east-west route along the Gulf Coast — was closed because of flooding, with the water reported to be four feet (1.2 meters) deep at one spot, officials said.

An area just west of New Orleans got about 17 inches (43 centimeters) of rain in 20 hours, Greg Carbin of NOAA’s Weather Prediction Center tweeted.

Still, it appeared that the levees that failed in 2005 during Hurricane Katrina held up in Ida, the governor said.

“For the most part, all of our levees performed extremely well — especially the federal levees — but at the end of the day, the storm surge, the rain, the wind all had devastating impacts,” Edwards said. “We have water systems that are out. We have tremendous damage to homes and to businesses.” 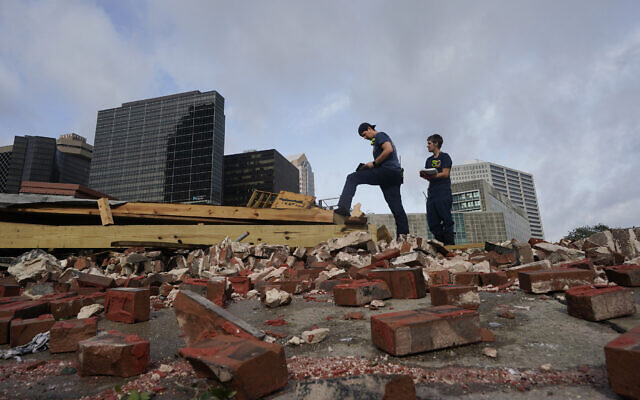 New Orleans firefighters assess damage as they look through debris after a building collapsed from the effects of Hurricane Ida, August 30, 2021, in New Orleans, Louisiana. (AP Photo/Eric Gay)

The rain and surge of seawater in the maze of rivers and bayous south of New Orleans threatened hundreds of homes. On social media, people posted their addresses and directed search-and-rescue teams to their attics or rooftops.

Jefferson Parish in suburban New Orleans knew of 500 people who said they were going to stay in areas that were flooded, and it began sending out dozens of boats to account for everyone and start rescuing them, Parish Council member Deano Bonano told WWL-TV.

More than a million customers in Louisiana and Mississippi were without power, according to PowerOutage.US, which tracks outages nationwide. That left them without air conditioning and refrigeration in the dog days of summer. 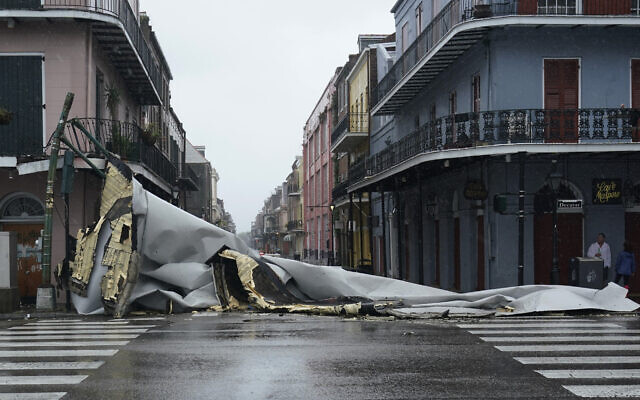 A section of roof that was blown off of a building in the French Quarter by Hurricane Ida winds blocks an intersection, August 29, 2021, in New Orleans. (AP Photo/Eric Gay)

The tower, which survived Katrina, is one of eight ways power is brought into New Orleans, and the failure of one of them might have led the others to shut down as well, Rodriguez said.

Other areas were also in the dark.

“One-hundred percent of the grid is smashed, hundreds of telephone poles snapped, trees hit power lines and just ripped them out,” Valiente told NPR. He said that the entire power grids collapsed in about 10 parishes and that it could take six weeks to fully restore power.

Edwards said on Sunday that 30,000 utility workers were in the state to help restore electricity.

AT&T’s phone system was down all across southeastern Louisiana. Many people resorted to using walkie-talkies. The governor’s office staff had no working phones. 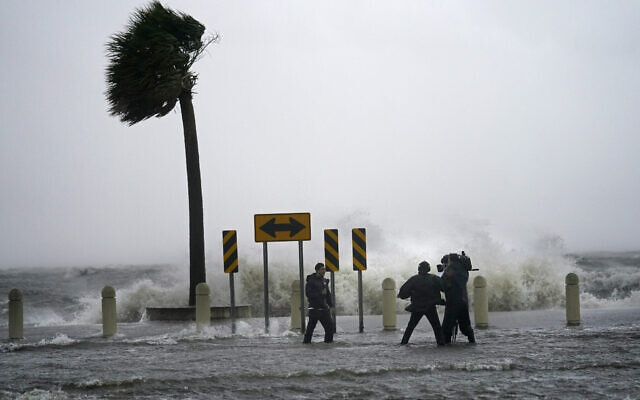 A news crew reports on the edge of Lake Pontchartrain, ahead of approaching Hurricane Ida in New Orleans, August 29, 2021. (AP Photo/Gerald Herbert)

Farther south, emergency officials had not heard from Grand Isle since Sunday afternoon. About 40 people stayed on the barrier island, which took the brunt of the hurricane and was swamped by seawater, Jefferson Parish President Cynthia Lee Sheng told NBC.

Ida’s 150 mph (230 kph) winds tied it for the fifth-strongest hurricane ever to hit the mainland. Its winds were down to 45 mph (72 kph) early Monday, and forecasters said it would rapidly weaken, while still dumping heavy rain over a large area.

In Mississippi’s southwestern corner, entire neighborhoods were surrounded by floodwaters, and many roads were impassable.

Ida was expected to pick up speed Monday night before dumping rain on the Tennessee and Ohio River valleys on Tuesday, the Appalachian mountain region Wednesday, and the nation’s capital on Thursday.

Forecasters said flash flooding and mudslides are possible along Ida’s path before it blows out to sea over New England on Friday.