BUDAPEST, Hungary (AFP) — Hungarian prosecutors said on Thursday they had opened a probe into allegations that the government used Israeli-made spyware to target hundreds of phone numbers, including those of journalists.

“The task of the investigation is to establish the facts and to determine whether and, if so, what crime has taken place,” the Budapest Regional Investigation Prosecutor’s Office said in a statement.

The probe followed several complaints, and intends to look “into the so-called Pegasus case, under the suspicion of the crime of gathering unauthorized secret information,” it added.

Media reports on Sunday claimed that several governments had used the Pegasus spyware technology, developed by the Israel-based NSO Group, to infiltrate the smartphones of potentially tens of thousands of people.

Hungary was the only European Union country listed as a potential user of the spyware. The spyware was allegedly used to target hundreds of subjects, including journalists, lawyers and other public figures.

Hungarian officials have dismissed the allegations, calling them “unsubstantiated.”

This studio photographic illustration shows a smartphone with the website of Israel’s NSO Group which features ‘Pegasus’ spyware, on display in Paris on July 21, 2021. (Joel Saget/AFP)

Interior Minister Sandor Pinter said earlier this week that Hungary “has always acted in accordance with the law,” while Foreign Minister Peter Szijjarto has insisted that the government “has no knowledge of such data collection.”

Critics have long accused self-styled “illiberal” Hungarian Prime Minister Viktor Orban of undermining basic rights, including press freedoms, since he took power in 2010, and doubt that the probe will have consequences.

“I don’t see why this would mean anything. This just means that they have officially received the complaints,” Andras Lederer from the Helsinki Committee told AFP.

“They have years to investigate if they want… This is merely an administrative step,” he said.

On Tuesday, the European Commission sounded the alarm over judicial independence, press freedom and anti-graft efforts in Hungary, in the bloc’s second annual report on those issues.

Legal expert Mate Daniel Szabo also said earlier this week that there was little chance of serious consequences to the scandal because Hungary lacks independent safeguards against abuses of power.

Szabo, a co-head of the Hungarian Civil Liberties Union (TASZ), says secretive surveillance is actually in line with Hungarian law “even if it may be unlawful by other standards.” 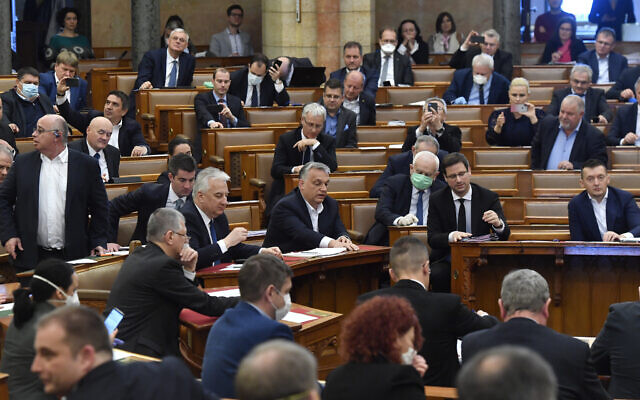 Hungarian Prime Minister Viktor Orban, center, his deputy Zsolt Semjen and other government members and MPs of the governing Fidesz party vote on a draft law concerning extraordinary measures during the plenary session of the Parliament in Budapest, Hungary, on March 30, 2020. (Zoltan Mathe/MTI via AP)

The law empowers the justice ministry to authorize surveillance and data-gathering without review by an independent body or judge, he said.

In the latest annual press freedom index of Reporters Without Borders, the central European country dropped to the 92nd position — the second-lowest in the EU — with the media watchdog calling it a “would-be information police state.”

Orban allies have successively bought up or exerted pressure on independent news outlets in recent years.

Among others, leading independent radio station Klubradio, who were often critical of Orban, was forced off the air after it lost its broadcast license.

A year ago, some 80 journalists — almost the entire newsroom — resigned from leading news site Index.hu after their editor, who had warned about growing political “external pressure” on the website, was fired.