Military chief Aviv Kohavi was the first recipient of a campaign medal for service in southern Lebanon during Israel’s occupation of the area from 1982 to 2000 on Monday night, following years of effort by veterans to have that period recognized as an official campaign.

Last July, following the 20th anniversary of the Israel Defense Forces’ withdrawal from southern Lebanon’s security zone, the military launched a committee led by former IDF chief of staff Shaul Mofaz, who oversaw the pull-out from Lebanon, to consider formally recognizing that 18-year period as a distinct military campaign, separate from the 1982 First Lebanon War and the 2006 Second Lebanon War.

Over the past 11 months, the proposal received all the necessary approvals — from the committee, Kohavi, Defense Minister Benny Gantz and finally by a ministerial committee in March — for the period in southern Lebanon to become the ninth campaign recognized by the military, alongside the 1948 Independence War, 1956 Sinai War, 1967 Six Day War, 1967-1970 War of Attrition, 1973 Yom Kippur War, 1982 First Lebanon War, 2006 Second Lebanon War, and 2014 Gaza war, known officially as Operation Protective Edge.

For Kohavi and Gantz, as well as most of the IDF’s current top brass, the period in southern Lebanon was their first major brush with combat.

Israeli soldiers opening gates for tank during the IDF’s withdrawal from Lebanon, on June 22, 2000. (Flash90)

In his speech, Gantz reflected on the fact that as IDF’s liaison to the Southern Lebanese Army he was the last Israeli soldier to leave southern Lebanon, literally locking the gate behind him as he re-entered Israeli territory.

“This is an emotional moment for me as a person and foremost as a soldier,” Gantz said, saying the awarding of the campaign medal brought closure to a contentious and difficult period for many Israelis.

“Today we are reopening the gate that I myself closed — to memories, to recognition, to deepening the wounds, to embracing the soldiers,” he said. 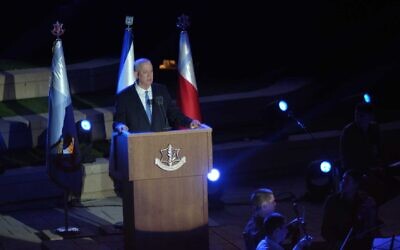 The defense minister also used the event to send a warning to the government of Lebanon and to the Hezbollah terror group, whom the IDF battled during the occupation of southern Lebanon and fought in a war in 2006 and is constantly preparing to fight again.

“Lebanon needs to know that what Gaza experienced a few weeks ago is only the tip of the iceberg,” Gantz said.

“The targets are ready. Whoever hides weapons in their house, endangers their children,” he added, referring to the assessment that Hezbollah has large missile stockpiles and launchpads in civilian homes in towns and villages along the border.

In an apparent message to Hamas, which is holding captive the remains of two IDF soldiers and two living Israeli civilians, Gantz said Israel would do anything needed to retrieve its citizens from captivity. The comments came as Israel was in the midst of negotiating with Hamas about the issue and a day after the terror group released an audio recording that it claimed was from one of the Israeli civilians, though this has been disputed by each of the men’s families. 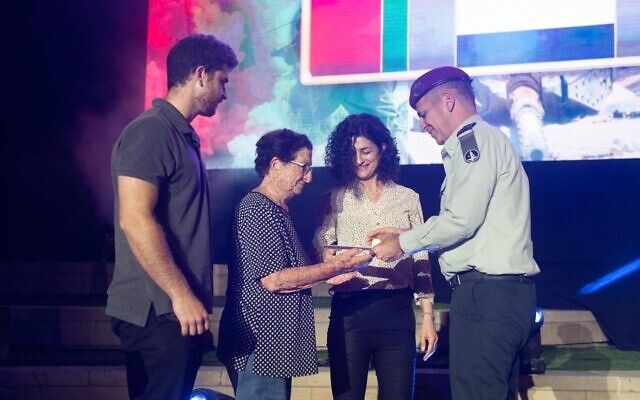 IDF Chief of Staff Aviv Kohavi awards a campaign medal marking Israel’s 18-year occupation of southern Lebanon to the family of Brig. Gen. Erez Gerstein, who was killed in the campaign, at a ceremony north of Tel Aviv on June 7, 2021. (Israel Defense Forces)

After Kohavi received the first medal, he then awarded one to the widow of Brig. Gen. Erez Gerstein, the highest-ranking IDF officer killed in the campaign, to the parents of Sgt. Tzahi Itah, the last soldier to be killed in the campaign, to a representative of the wounded veterans from the campaign, Eyal Ben-Tzvi, a combat medic who was seriously injured in southern Leabnon, as well as to a representative from the Southern Lebanese Army, Rabia Karim Raida, who served for 13 years in the Lebanon security zone.

The service ribbon was made up of a series of colored lines, symbolizing different aspects of the campaign. In the center, there are blue and white horizontal lines representing the Israeli flag; on either side of them are vertical gray lines signifying the color of the IDF’s fortresses in southern Lebanon as well as the prolonged operations there; next to them are a pair of green lines representing the forests of Lebanon; and next to them are a pair of red lines signifying the physical and mental toll of the campaign. The green and red lines also represent the Lebanese flag.

Further distribution of the campaign medals will be handed out by the units involved in the coming weeks and months. Unlike in the case of wars, in which every soldier who served in the military at the time receives a medal, only troops who served within the Lebanese security zone will be eligible for the pin. 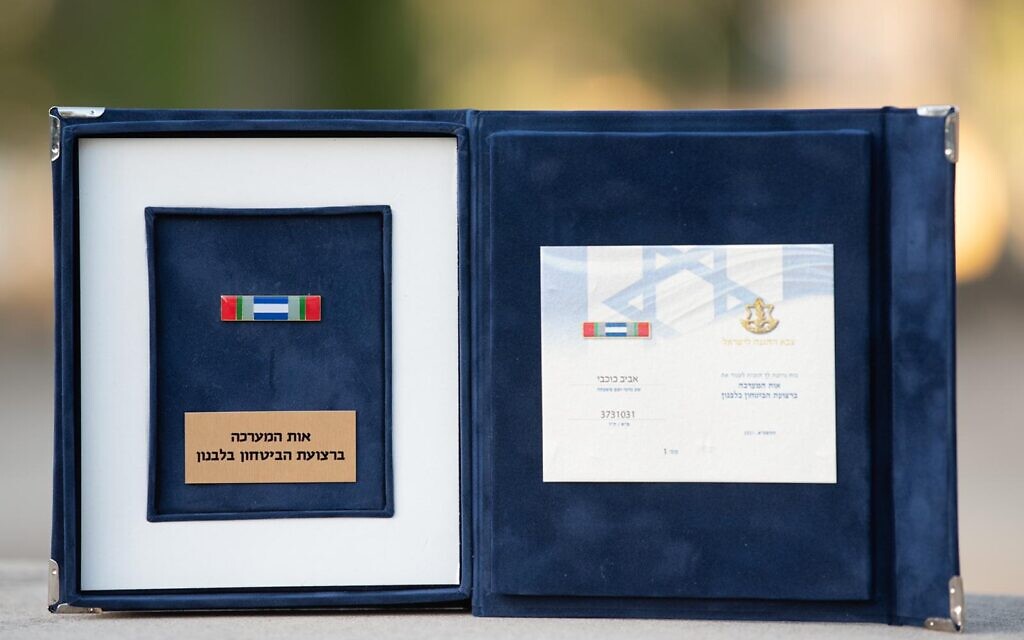 A campaign medal marking Israel’s 18-year occupation of southern Lebanon, which began to be distributed to soldiers who served in it, on June 7, 2021. (Israel Defense Forces)

Israel’s occupation of southern Lebanon — totaling about 10 percent of Lebanese territory — had been aimed at defending northern Israel from attack by terror groups, notably the Iran-backed Hezbollah, though the military’s presence there for 18 years in which some 675 soldiers were killed and thousands more wounded was considering highly contentious in Israel, with deep questions about the efficacy of the campaign.

Following years of public outcry, then-prime minister Ehud Barak ordered the military to dismantle the security zone and hurriedly pull back to the international border in late May 2000. The South Lebanon Army, a militia backed by Israel that was accused of torturing its prisoners and otherwise dealing violently with its opponents, collapsed as the IDF departed, with many members of the group subsequently moving to Israel to avoid retribution from Hezbollah and Lebanese citizens. The Iranian-backed Hezbollah moved into southern Lebanon. A Hezbollah cross-border raid led to the Second Lebanon War in 2006.