Soldiers of the Israel Defense Force’s Home Front Command were physically and verbally attacked by ultra-Orthodox Jews while they were assisting in searching for dead and wounded in the stampede during Lag B’Omer celebrations at Mount Meron, the IDF said late Saturday.

“We entered the gravesite to search for injured people and suddenly a commotion began that there are female soldiers in uniforms who are touching the wounded,” a soldier told Army Radio earlier.

The military confirmed the incident, saying in a statement that “the force continued on its mission and ignored the harmful behavior.”

“The IDF views this incident very gravely and condemns any violence — physical or verbal — toward female and male soldiers. The IDF in general and the Home Front Command in particular will continue to extend a hand, to assist and to save any citizen or resident in a time of need,” a spokesperson for the military added.

Defense Minister Benny Gantz said in a statement: “Saving live is a supreme value and I’m proud of all IDF soldiers in treating the wounding in the disaster at Miron and firmly condemn whoever attacked the soldiers there.

“Many citizens owe their lives to those who were called to the event. Just like at Moron, just like during the coronavirus, IDF soldiers will continue to save lives wherever they are needed.”

On Friday, a spokesperson for the IDF said “Search and Rescue Brigade troops, Northern Command medical teams and a number of IAF helicopters with medical teams and Unit 669 forces are assisting in the mass casualty incident in Mount Meron.”

The disaster began at around 1 a.m. on Friday morning, when huge crowds of ultra-Orthodox pilgrims were making their way along a narrow walkway with a slippery metal flooring that ended in flights of stairs. People began to slip and fall, others fell upon them, and a calamitous stampede ensued. 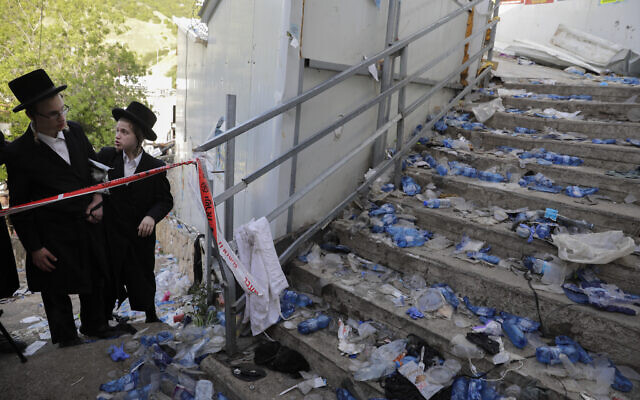 Ultra-Orthodox Jews at the scene of a deadly stampede during Lag BaOmer festival at Mt. Meron in northern Israel, April 30, 2021 (AP Photo/Sebastian Scheiner)

Forty-five people were crushed to death and more than 150 people hurt, including several in critical condition.