The Israel Defense Forces has rejected out of hand an appeal against the planned evacuation and demolition of an illegal West Bank outpost.

Settlers of the Evyatar outpost had hoped to stop the planned evacuation, but the military denied their request on Sunday. “The Evyatar outpost was established illegally. Everything was done in complete violation of the law and without any proprietary or planning agreements,” the IDF Central Command wrote.

The military also stated that that the required documents were not attached to the appeal, which was itself sufficient reason for denying the request.

The residents can now appeal to Israel’s top court, the High Court of Justice, but their petition unlikely to be accepted there.

The land on which Evyatar was reestablished in April historically belonged to the adjacent Palestinian villages of Beita, Kablan and Yitma, though residents have been barred access to it for decades for what the IDF has said are security reasons.

Settlers seen in the Illegal Evyatar outpost, in the northern West Bank, on June 16, 2021. (Sraya Diamant/Flash90)

The area around Evyatar has seen repeated clashes between Israeli forces and Palestinians in recent weeks following the reestablishment of the outpost.

Palestinians near the adjacent Beita have hurled stones at troops and burned swaths of land, while Israeli soldiers have responded with riot dispersal munitions and in some cases, live bullets. In recent weeks, four Palestinians have been killed by Israeli fire in the clashes.

In the denial of the settlers’ appeal, the military wrote that the establishment of the illegal outpost “undermined security stability in the area,” adding that the army was required to use additional forces to protect the area, which disrupts military routine and impairs the IDF’s ability to maintain security in the area. 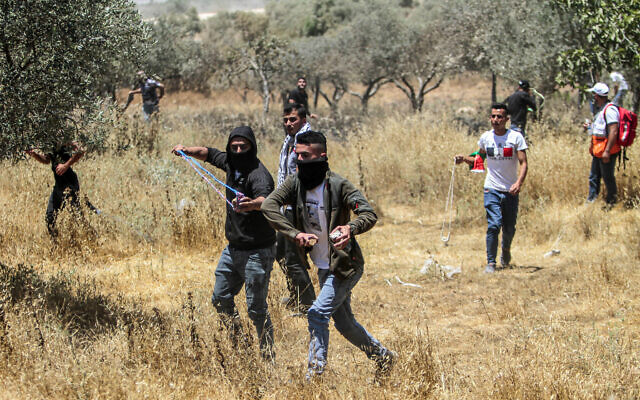 Israeli security forces clash with Palestinians during a protest against the Evyatar outpost, in Beita, near the West Bank city of Nablus, on June 18, 2021. (Nasser Ishtayeh/Flash90)

Evyatar has already been razed several times since it was built in 2013 after the murder of Yitzhar resident Evyatar Borovsky in a stabbing attack at the Tapuah Junction.