The Israel Defense Forces on Thursday blamed a unit in Iran’s elite Quids Force for planting explosives in Israeli territory along the border with Syria, drawing retaliatory Israeli strikes.

The IDF said the Quds Force’s Unit 840 was responsible for planting three anti-personnel mines that were discovered and disarmed by military engineers on Tuesday.

Lt. Col. Avichay Adraee, the IDF’s Arabic-language spokesman, said the secretive unit was in charge of planning and setting up “terror infrastructure” outside Iran against Western and Iranian opposition targets.

The military said Unit 840 was also behind a similar attempt in August by four armed men to plant explosives inside an unmanned military outpost along the border. The four were killed by IDF troops when they crossed into Israeli territory.

“Iran, we’re watching you,” the IDF wrote on its English-language Twitter account. “We will not allow Iran to entrench itself in Syria.”

IDF intel can confirm that the Iranian Quds Force Unit 840, which is part of Iran’s global network of terror, was responsible for the IED attacks on the Israel-Syria border this week & in August 2020.

We will not allow Iran to entrench itself in Syria.

The Quds Force is a branch of Iran’s Islamic Revolutionary Guard Corps tasked with carrying out overseas operations.

Apparently responding to the Israeli strikes in Syria earlier in the week, the head of the IRGC appeared to warn Israel on Thursday.

“There won’t be any safe place for whoever wants to harm Iranian interests,” Maj. Gen. Hossein Salami said during a ceremony held by the IRGC’s navy. “The defense of Iran’s security and interests knows no geographical border.”

In response to this week’s incident, Israel struck targets linked to Iran’s Islamic Revolutionary Guard Corps and Syrian military around Damascus early Wednesday. The military later said the strikes were meant to send a message to Iran to leave Syria, specifically the border area.

In a rare move, the IDF released images of some of the strikes and on Thursday morning also published aerial before-and-after photographs of two sites that it bombed: a military complex used by the Quds Force, and a command center of the Syrian military’s 7th Division, which Israel says cooperates widely with Iranian forces in Syria.

Syrian state media reported that three Syrian soldiers were killed in the strikes. All three appeared to have served in air defense batteries that were destroyed by the IDF after they fired on Israeli jets.

The Syrian Observatory for Human Rights, a pro-opposition organization based in the United Kingdom, said 10 people in total were killed in the Israeli strikes, some of them Iranian. This could not be immediately confirmed and was not reported by other groups in Syria. The Observatory has in the past been accused of inflating and even inventing casualty figures.

In general, Israel does not intentionally target people in its strikes, instead focusing on infrastructure, as this has been found to reduce the likelihood of retaliation by Iran and its proxies.

The IDF generally maintains a policy of ambiguity regarding its activities against Iran and its proxies in Syria, refusing to publicly acknowledge its actions, with the exception of retaliations to attacks, as was the case this week.

The mines uncovered Tuesday were planted within Israeli territory, but on the Syrian side of the security fence, an area where Israeli troops routinely conduct patrols, indicating that the explosives were meant to be used against those soldiers. IDF Spokesperson Hidai Zilberman told reporters on Wednesday that the mines were planted by Syrian nationals who live near the border, at the instruction of the IRGC Quds Force.

Zilberman told reporters on Wednesday that the retaliatory strikes were intended as both a message to Iran that “we won’t allow Iranian entrenchment at all and next to the border specifically,” and a message to Syria that it will be held responsible for allowing Tehran to maintain a presence in its country.

He also said the military was prepared for the possibility of retaliation from Iran or Syria, with Iron Dome and other air defense systems on high alert. 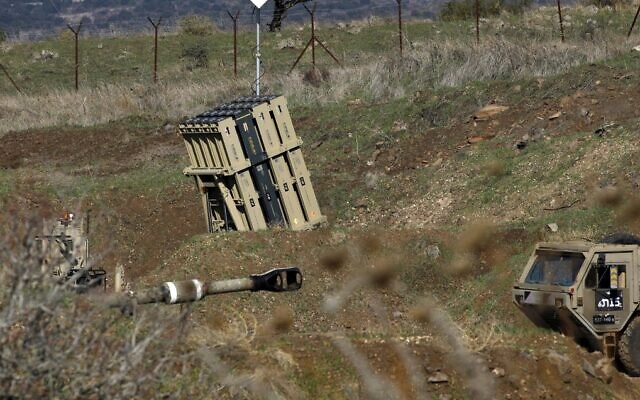 An Iron Dome anti-missile battery is seen in the Golan Heights near the border with Syria on November 18, 2020. (Jalaa Marey/AFP)

Israel views a permanent Iranian military presence in Syria as an unacceptable threat, which it will take military action to prevent.