Six Israeli F-35 stealth fighters landed in Italy last week to take part in a two-week air exercise in Italy with its air force, alongside those of the United States and United Kingdom, in the largest and farthest drill that the aircraft have taken part in to date, the military said Sunday.

Though the explicit goal of the exercise is to improve the overall capabilities of the F-35 jet, which entered military service in late 2016, a senior Israeli Air Force officer acknowledged that in part, this drill — dubbed Falcon Strike 2021 — was meant to prepare Israeli pilots for using the fighter aircraft against Iranian forces.

“Iran is in our focus,” the senior officer said, speaking to reporters on condition of anonymity.

The exercise will be held from June 6 to June 17, but will kick off in earnest on Monday. Though Israeli F-35 jets have taken part in international exercises in the past, this will be the first time that the aircraft will fly alongside F-35 planes from three other countries.

Those planes will face off against a fleet of Italian aircraft that will act as a “red team,” simulating an enemy air force, including Eurofighter Typhoons, AMX International fighter jets, Panavia Tornados, Predator drones and Bel Augusta helicopters.

The British aircraft carrier the HMS Queen Elizabeth will also be used during the exercise, which will be held both over Italian territory and the Mediterranean Sea.

According to the IAF officer, a large number of surface-to-air missile batteries will be used in the exercise against the F-35 fighter jets in order to create an “atmosphere full of threats.”

During these missions, the Israeli pilots will simulate airstrikes on targets behind enemy lines and ground support missions, while flying over unfamiliar terrain.

In addition to facing off against surface-to-air missile threats, the Israeli jets will also take part in aerial dogfights. 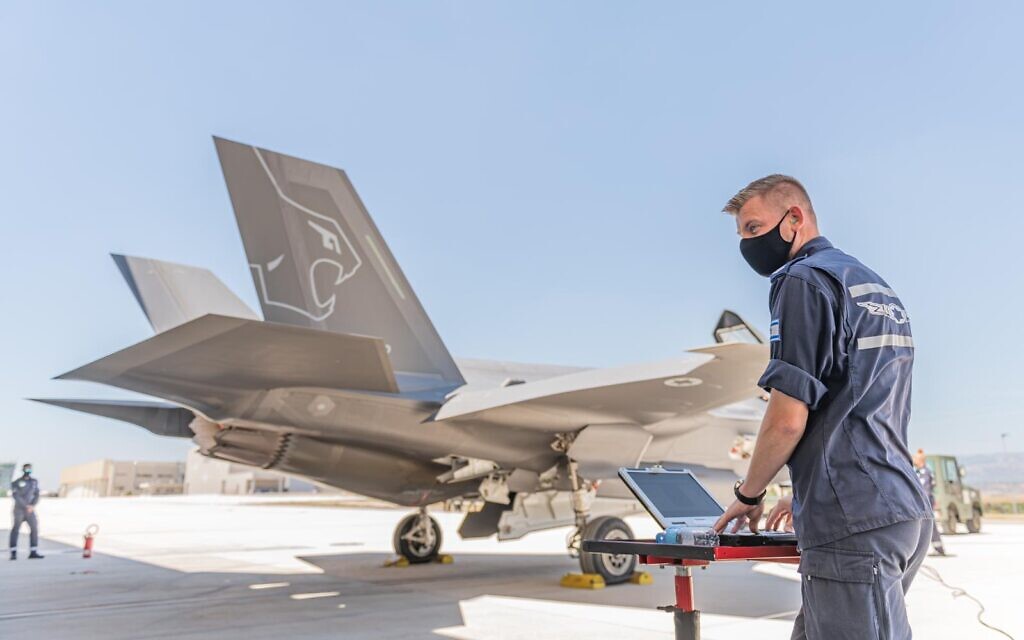 An Israeli technician stands in front of an F-35 fighter jet ahead of an air force exercise in Italy in June 2021. (Israel Defense Forces)

These exercises are meant to improve the capabilities of the F-35 fleet as well as the Israeli Air Force’s ability to operate with foreign militaries, according to the officer.

The IAF received its first F-35 fighter jets in December 2016 and has been adding more of them to its fleet in groups of twos and threes in the interim four and a half years up to its current level of 27 planes. Another 23 F-35 jets are due to arrive in Israel by 2024 to fill the IDF’s current order of 50 aircraft, though Israeli officials have said they plan to purchase more.