In his first visit to Jerusalem, Bahraini Foreign Minister Abdullatif bin Rashid al-Zayani on Wednesday called for the resumption of Israeli-Palestinian peace talks, indicating that the region will only know true peace with the creation of a Palestinian state alongside Israel.

Delivering a statement alongside Prime Minister Benjamin Netanyahu and US Secretary of State Mike Pompeo, al-Zayani said he hopes the emerging cooperation between Israel and Bahrain would “pave the way for a dawn of peace for the entire Middle East.”

To this end, he added, “I continue to emphasize, in all my meetings, that in order to achieve and consolidate such peace, the Palestinian-Israel conflict needs to be resolved. I therefore call for both parties to get around the negotiating table to achieve a viable two-state solution, as is also sought by the international community.”

Zayani is the first minister from the tiny Gulf kingdom to visit Israel, about two months after the two countries agreed to establish diplomatic relations.

In that short period of time, Jerusalem and Manama made “considerable progress” on the path to a more stable region based on peace, dialogue and understanding, Bahrain’s top diplomat said.

“Equally, we are demonstrating what is possible, outlining a positive goal and bringing a new sense of optimism for the future of the Middle East,” he added.

“I am very much looking forward to building on this historic progress and am convinced that we have an opportunity to build cooperation, tolerance, coexistence and trust — not only between our two nations, but between all children of Abraham. In doing so, let us deliver a peace that ensures a safe, stable and prosperous Middle East for all its peoples. Our region deserves no less,” he said.

In their respective speeches, delivered ahead of a tripartite meeting at the prime minister’s Balfour Street residence, Netanyahu and Pompeo hailed Israel’s recent normalization agreements with the United Arab Emirates and Bahrain — known as the Abraham Accords — and Sudan, but did not explicitly refer to the Palestinians.

“Three peace agreements in six weeks. I don’t think it gets much better than that,” Netanyahu said. “Today we’re making history again. This is the first-ever official ministerial visit from the Kingdom of Bahrain to the State of Israel. It marks another important milestone on the road to peace between our two countries — and peace in the region.”

Jerusalem and Manama are advancing their growing cooperation in various areas “with “astonishing speed,” he went on. “Israelis are flying to Bahrain; Bahrainis are flying to Israel. The sky is no longer the limit.” 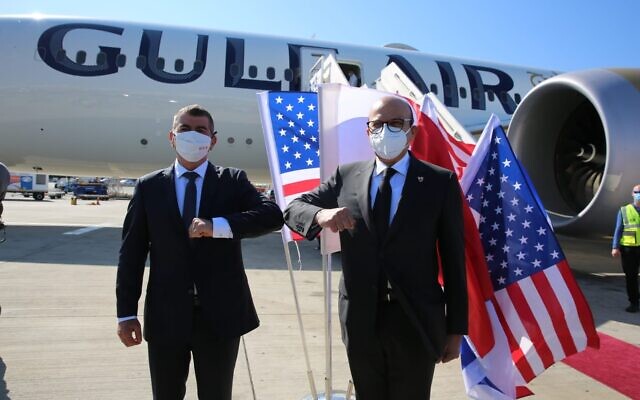 Netanyahu said he and Bahrain’s King Hamad bin Isa al-Khalifa “are building a bridge of peace that many others will cross in the future.” He concluded his speech by describing al-Zayani’s visit as “another historic step on the road to a broader peace.”

Pompeo, who had arrived in Israel earlier Wednesday afternoon and will remain in the country until Friday, hailed Israel’s agreements with the UAE, Bahrain and Sudan, hoping “there would be many more to follow.”

The Abraham Accords have many benefits, including showing the leaders of Iran that “their influence in the region is waning and that they are ever-more isolated, and this shall forever be, until they change their direction,” said the outgoing US secretary of state.

All three leaders hailed the Israel-Bahraini agreement to open reciprocal embassies in both countries.

Earlier on Wednesday, al-Zayani announced, in a meeting with Foreign Minister Gabi Ashkenazi, that Bahrain has okayed Israel’s request to establish an embassy in Manama and is in turn seeking authorization to open an embassy in Israel.

“This is a process which I hope can now move forward relatively quickly,” he said.

Ashkenazi said he and his guest had agreed to open embassies in both countries as soon as possible. “I hope that by the end of the year we will be able to hold ceremonies to mark their openings,” he said, adding that he plans to visit Manama in December to personally open the mission.

Al-Zayani was also hosted by President Reuven Rivlin, who brought up the Israeli-Palestinian question as well. 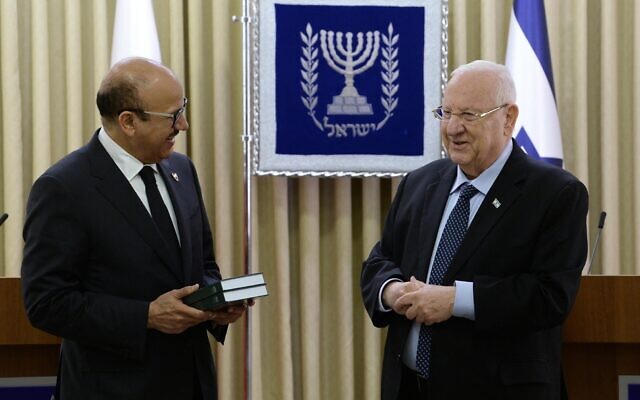 “We have a lot we can do together, for the future of all peoples. And when I say, that we want a better future, for all peoples, I also include, of course, our neighbors the Palestinians,” Rivlin said. “The new friendship between Israel and Bahrain and others in our region makes clear that peace is possible, and that the world will not wait. So, I make clear to the Palestinian people that Israel wants to live in peace in this region.”

Israelis and Palestinians are destined to live together, he went on. “It is time to build trust and to make peace,” he went on.

Al-Zayani replied by saying that the Bahraini people seek the same things as Israelis, namely peace, tolerance and co-existence. “These are values that King Hamad [bin Isa Al Khalifa] is working on spreading around the region. We are confident that we can succeed,” he said. “The path of peace is not easy. As partners, we can overcome them and show the fruits of peace among nations.”

Al-Zayani is scheduled to head back to Manama at around 10:30 p.m., after only 12 hours on the ground.