As Muslim worshipers flooded Jerusalem’s Old City on the first Friday of Ramadan, one could almost hear the collective sigh of relief: After a year of coronavirus restrictions that shuttered mosques, including during the Islamic holy month, the festivities were almost back to normal.

After the noon prayer ended, tens of thousands streamed from al-Aqsa Mosque, one of Islam’s holiest sites, toward Damascus Gate, where buses waited to take them all over Israel and the West Bank. Worshipers came from East Jerusalem, the West Bank and around Israel.

“There was no Ramadan last year, because of coronavirus,” said Basil al-Siryoni, 20, a resident of the Old City. “This year, we can go pray in the al-Aqsa Mosque, listen to Quran recitations — everything’s wonderful during Ramadan, everything’s different.”

The human current seemed endless, and the narrow thoroughfares leading to the Old City’s gateways remained clogged for nearly two hours after the prayers. Caught in the blazing midday sun, some worshipers slung neatly folded prayer rugs over their heads to provide some shade.

Shopkeepers who have been starved for business by the coronavirus’s stranglehold on tourism were eager to take advantage of the foot traffic.

“I’ve been waiting all year for these two hours,” said Old City vendor Hashem Salaymeh with a grin. Salaymeh sells dates and small gummied candies, known in Arabic as hayaya, at a cart near Damascus Gate.

Palestinians, like Israelis, spent last year’s Ramadan under coronavirus lockdown. And for the first time since Jerusalem fell into Crusader hands during the Middle Ages, the al-Aqsa Mosque was closed for an extended period of time.

Last Ramadan, everyone says, barely felt like the Islamic holy month, which is usually replete with family visits and religious gatherings. Muslims fast from sunrise to sunset during Ramadan, often gathering at dusk to break their fast with large communal meals.

They also gather to pray the taraweeh, additional optional prayers recited late at night; over the 30-day period, some worshippers recite all 30 parts of the Quran during the taraweeh.

“I hope we never see another Ramadan like that. It was miserable, sad, confused — it wasn’t Ramadan. I hope to just forget about it,” said Mahfouz Abu Sbeih, who owns a sweet shop in the Old City. “We barely left our homes, much less go to al-Aqsa.” 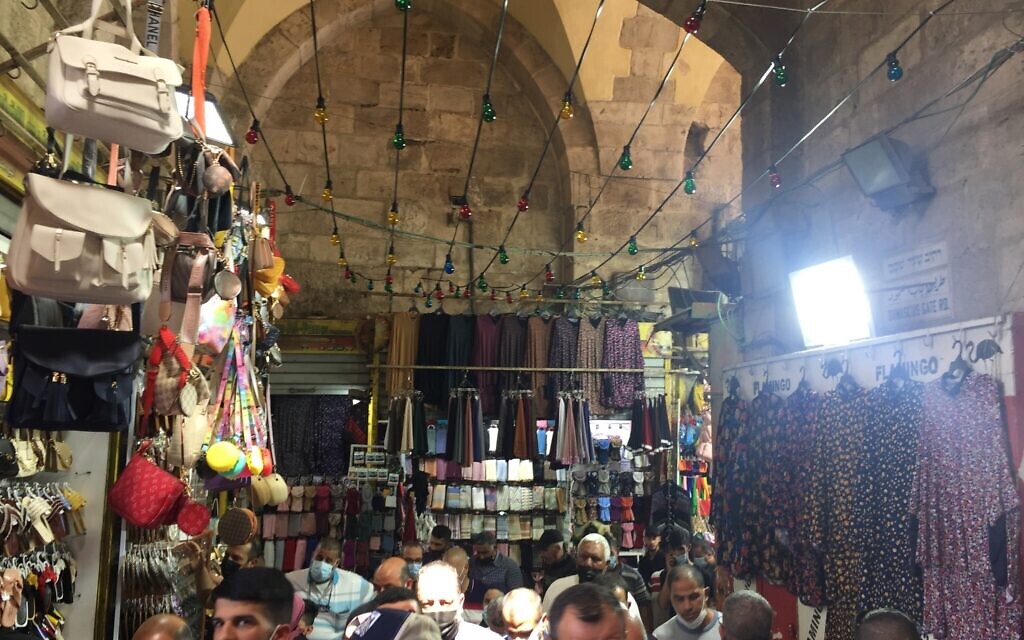 On Friday Abu Sbeih’s shop bustled with customers purchasing awameh and qatayef. The former, brightly colored sticky honey-balls, and the latter, a kind of folded pancake with cheese, are both popular Ramadan deserts.

Not everything was quite back to normal, however.

Israeli authorities announced last week that only 10,000 fully vaccinated Palestinians from the West Bank would be given permits to attend Friday prayers at al-Aqsa during Ramadan. Many Palestinians have yet to be vaccinated, amid a stormy debate over whether Israel should bear responsibility for doing so. Around 125,000 West Bank Palestinians have received at least one coronavirus jab, or some 3.7 percent of the population.

As such, the number of worshipers on Friday was considerably lower than usual, with not many West Bank residents present. In normal years, Israel often issues permits for Gazans as well, but a Defense Ministry spokesperson confirmed that none had been issued so far this year.

“We estimated that only around 50,000 to 60,000 people attended,” al-Aqsa Director Omar al-Kiswani told The Times of Israel in a phone call on Friday. “If you look at the photos of today’s prayer, you’ll see that al-Aqsa’s 144 dunams seem almost empty of worshipers.”

“What we have here is just a small percent of the number of people we’re used to seeing during Ramadan, as you can see,” said al-Siryoni.

The Israeli military department charged with managing Palestinian civilian affairs, COGAT, has promised to review the limitations after Ramadan’s first Friday. But worshipers expressed frustration at the restrictions. 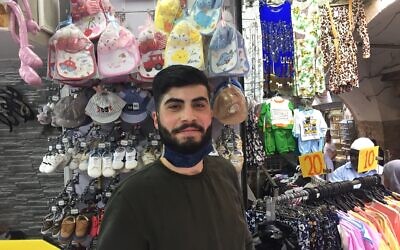 “We ought to be seeing far greater numbers today but the Israeli occupation is closing off the city and killing our Ramadan joy. This is going to hurt the ordinary merchants who’ve waited to sell their goods,” said Muataz al-Ajluni, an East Jerusalem Palestinian who prayed at al-Aqsa on Friday.

Israeli security forces also set up makeshift barricades and checkpoints in East Jerusalem on Friday, fearing crowds of worshipers would riot. Friday prayers at al-Aqsa have often been a flashpoint for violent confrontations between police and some Palestinians, especially during Ramadan. 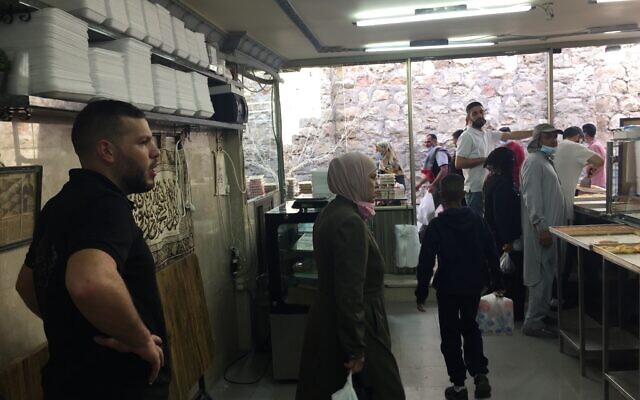 East Jerusalem Palestinians make sweets on the first Friday of Ramadan, April 16, 2021. as worshippers from Al-Aqsa come to purchase treats with which to break the fast (Aaron Boxerman/The Times of Israel)

But Friday’s prayers went off without a hitch, with mosquegoers dispersing throughout the Old City’s markets afterward to purchase sweets and presents for children. But the past three nights saw clashes between Israeli police and Palestinians said to be returning from al-Aqsa.

According to police, Palestinians threw stones and bottles at buses and police by Damascus Gate. One officer was lightly injured, and several Palestinians were arrested in connection with the incidents.

Al-Kiswani denied any connection between al-Aqsa worshipers and the clashes, and condemned the intensive security presence.

“The large number of barricades forced worshipers to walk long distances in the noon-day sun, even as they were fasting,” al-Kiswani said. 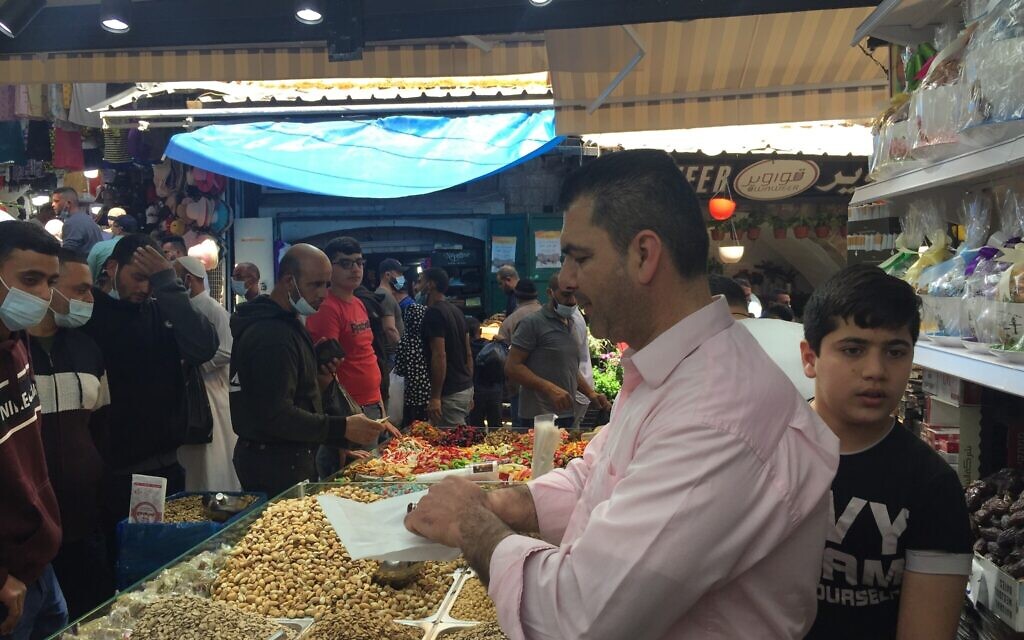 Perhaps the happiest people in sight were the Old City’s merchants, who seemed to be doing their best business in a long time. Without tourists or large numbers of visitors from the West Bank, storekeepers have had a tough fiscal year.

“It was a really hard year of stagnation, we were never open or at work, and we couldn’t find enough money to support our families,” said Abu Muhammad al-Hilwani, who sells dried fruit and nuts at a store close to al-Aqsa.

But many were simply pleased to return to the mosque after the long, difficult year of pandemic.

“It’s amazing, I feel wonderful and close to my faith,” said Fatima Abdelrahman of East Jerusalem. “I’m so happy that they let us enter.”