AMMAN, Jordan (AP) — A US citizen and former top aide to Jordan’s King Abdullah II alleged he was tortured in Jordanian detention and fears for his life, his US-based lawyer said Sunday, on the eve of a verdict in the high-profile sedition trial linked to a rare public rift in the kingdom’s ruling family.

The allegations of mistreatment, denied by Jordanian officials Sunday, were raised just days before Jordan’s king is to become the first Arab leader to meet with President Joe Biden at the White House on July 19. Jordan is a key Western ally in an unstable Middle East.

Awadallah and co-defendant Sharif Hassan bin Zaid, a distant cousin of the king, have pleaded not guilty to sedition and incitement charges, which carry lengthy prison terms.

The defendants were accused of conspiring with a senior royal — Prince Hamzah, a half-brother of the king — to foment unrest against the monarch while soliciting foreign help. The indictment portrayed Hamzah as a disgruntled royal who never forgave Abdullah for taking away his title of crown prince in 2004. Hamzah, who was placed under house arrest in April and has been seen in public just once since then, denied he incited against the king, saying he was being punished for calling out high-level corruption.

Despite the serious nature of the allegations against Awadallah and bin Zaid, the trial ended after just six sessions. The court denied requests by Jordanian defense lawyers to call witnesses and prosecutors only shared purported transcripts, but not audio, from surveillance of the alleged plotters.

Bassem Awadallah, then Director of the Office of King Abdullah II of Jordan, attends a celebration to mark Independence Day, in Amman, Jordan, May 25, 2008. (Nader Daoud/AP)

The prosecutor’s office at the state security court denied the trial was unfair. Awadallah was “guaranteed due process” in line with Jordanian law, the prosecutor said in a statement to the AP. “He has not been mistreated in any way, and his allegations of torture of any kind are false.”

Sullivan, a former US attorney for Massachusetts and former acting director of the federal Bureau of Alcohol, Tobacco, Firearms and Explosives, said that based on the way the trial was conducted, a guilty verdict appeared to be a foregone conclusion. He said any conviction would be appealed.

The US legal team, which has remained in the background until now, will play a more open role in the appeals stage, said Sullivan. He said the aim is to raise awareness about Awadallah’s case in the United States and internationally. This includes “the serious concerns about his safety and security in the short term and the complete unfairness in terms of the process, as well as obviously the torture and violation of a number of international conventions, treaties and laws,” Sullivan said.

The prosecutor’s office said Awadallah didn’t raise torture allegations during the court hearings, his 17 meetings with his Jordanian lawyer or the first four of his five meetings with the US consul in Jordan. “He only made these claims at his most recent meeting with the consul, as the ruling’s pronouncement [verdict] neared,” the statement said.

Sullivan said Awadallah told his visitor that he had been been beaten, subjected to electrical shock and was threatened with future mistreatment “if he didn’t confess.”

The prosecutor’s office said Awadallah gave a voluntary statement about the case, denying it had been extracted by force. 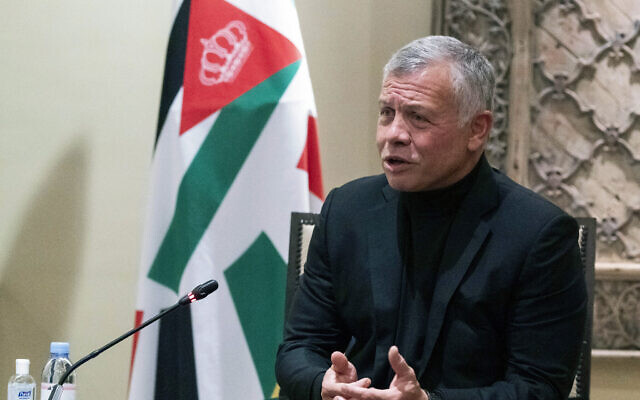 Awadallah’s family said late last week that he fears for his life. “Bassem is justifiably fearful of being killed in prison after the sentencing, especially because he held several high ranking and sensitive positions in the Jordanian government,” the family said.

Awadallah, who also holds Jordanian and Saudi citizenship, served as head of the royal court and government minister in Jordan. He has extensive business interests in the Gulf and has advised Saudi Arabia’s powerful crown prince, Mohammed bin Salman, on attracting foreign investment.

The Awadallah family urged the Biden administration to call for Awadallah’s release. The White House on Sunday directed queries to the State Department, which did not immediately respond to a request for comment.