LOD — On May 10, Yigal Erlich and his family returned late from a family gathering to find their city on fire.

“I arrived on my street and saw young Arabs lighting dumpsters ablaze, some carrying knives. They drew their knives to stab us, but we fled into our home,” said Erlich, a religious Jew who lives in the mixed Jewish-Arab city of Lod, in central Israel.

Erlich said he called the police, but they never showed up. “We saw our whole neighborhood go up in flames. A synagogue, the local pre-military academy, everything,” he said.

Later that same night, Maha al-Naqib was awoken by her son, who told that her cousin Mousa Hassouneh had been shot and killed by an armed Jewish civilian as clashes raged across the city.

A woman walks through burnt rubble in Lod on May 19, 2021, as clean-up and rebuilding begin in the central city following riots a week earlier. (Yossi Aloni/Flash90)

“He told me the news, but I couldn’t grasp what had happened, who to speak to, I was so afraid,” said al-Naqib, a former member of Lod City Council.

Israel has seen widespread civil unrest in recent days, with mixed Arab-Jewish cities emerging as a front line in the violence. Protests by Arab Israelis against Israeli policies in Jerusalem and Gaza exploded into violent riots. Jewish extremists struck back with revenge attacks, with violent mobs attacking Arabs in Ramle, Bat Yam and Acre.

No city has seen as much violence as Lod, which lies in Israel’s heartland. A mere twenty minutes from Tel Aviv, the city’s name has also long been synonymous with neglect, crime and official dysfunction.

Two have now died from the bloodshed: Hassouneh, a 31-year-old car repairman with three children, and Yigal Yehoshua, a 56-year-old Jewish electrician from a nearby suburb, who was killed by an Arab mob who hurled stones at his car.

Attacks and counter-attacks unfolded across Israel’s mixed cities, especially in Lod, a mixed city that has seen a contentious battle for its identity fought out between Jewish and Arab residents in recent years. The city is around 80% Jewish and 20% Arab.

Much of the controversy centers around a group of religious Jewish residents who moved to the city as part of what is called a Garin Torani, which are groups organized around the idea of bolstering the national-religious Jewish presence in cities with large non-Jewish or non-religious populations. In Lod, as in some other cities with a Garin, tensions have run high between local Arab Israeli residents and the religious Jewish newcomers, many of whom reside in poorer Arab neighborhoods.

Arab residents accuse the Garin Torani of seeking to Judaize their neighborhoods and push them out of the city. The Garin and their supporters argue that they only seek to support communities with lower socio-economic profiles.

The tensions between the two sides burst out of control on May 10 when an armed Jewish Israeli Lod resident shot and killed Hassouneh in contested circumstances.

Hassouneh’s father Malik blamed his son’s death on Lod mayor Yair Revivo, who encouraged the group to migrate to the city in order to maintain Lod’s Jewish majority.

“If it weren’t for Revivo, the settlers would not have been here to shoot him. Their presence is his responsibility,” Hassouneh said, referring to the Garin Torani. 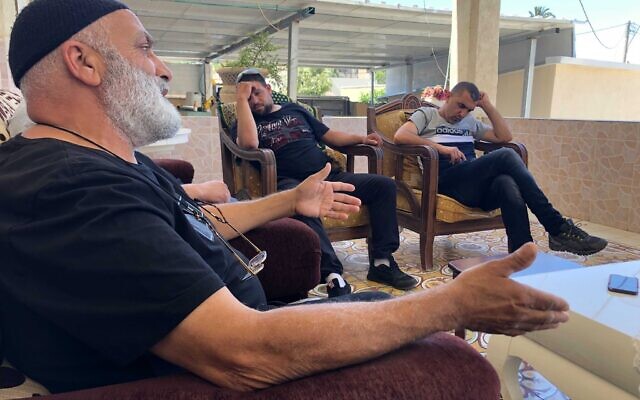 Malik Hassouneh, father of Moussa Hassouneh, discusses his son’s shooting death in the courtyard of his home in Lod on Tuesday, May 20, 2021 (Lazar Berman/The Times of Israel)

Moussa’s death under contested circumstances would serve as the spark which pushed Lod — likened by one of its chroniclers to a city balanced on a wire — into chaos.

Barely hidden tensions have long permeated Lod, leading both Arabs and Jews to see an ongoing struggle for the city’s identity.

Since becoming mayor in 2014, Revivo has increased investment in Arab neighborhoods. But he has also warned of Lod becoming an “Arab city,” sought to restrict the noise of the Muslim call to prayer, and called Arab culture inherently violent.

“The budgets have increased in Arab areas over the past few years. But the music, the energy, the atmosphere — it was totally anti-Arab,” said Aviv Wasserman, a staunch Revivo opponent who served as Lod’s deputy mayor between 2014 and 2017.

The mayor has encouraged an influx of religious Jewish migration into the city to increase the Jewish presence there, include the ideologically motivated Garin, which he vocally supports. His right-hand man, city manager Aharon Atias, founded the Garin there some 25 years ago.

But the Garin have managed to secure some extra benefits on the side. In the last three years, the Garin in Lod has received some NIS 6 million ($1.84 million) in benefits from the municipality budget.

The community and its supporters say they are there to pursue a program of social uplift. Their tide, they insist, will lift all boats in the long-troubled city. 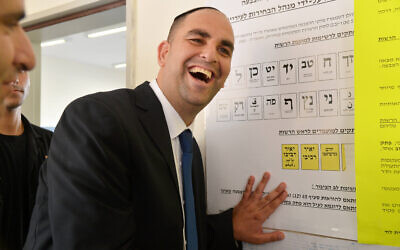 Yair Revivo votes in municipal elections at a polling station in the central city of Lod on October 22, 2013. (Yossi Zeliger/Flash90)

“No one is pushing anyone out. These are people who have come to strengthen the city, to do good work, pursue social initiatives with the community and live in co-existence,” said Ofra Lacks, a national-religious journalist and Lod resident.

But others see their presence as disturbing the delicate balance of life in Israel’s tense mixed cities, and accuse them of seeking to Judaize the city. Arab residents say they face regular harassment and even violence from the newcomers, some of them armed.

“There’s a lot of playacting, in order to reduce public antagonism. But make no mistake: this is an ideological movement, a strategic movement, which works to Judaize the city. That is the end goal of all their actions: by hook or by crook, to settle the city, to establish Jewish sovereignty there,” said Amnon Be’eri Solitziano, who co-directs the Abraham Initiatives, a shared society nonprofit based in Lod. 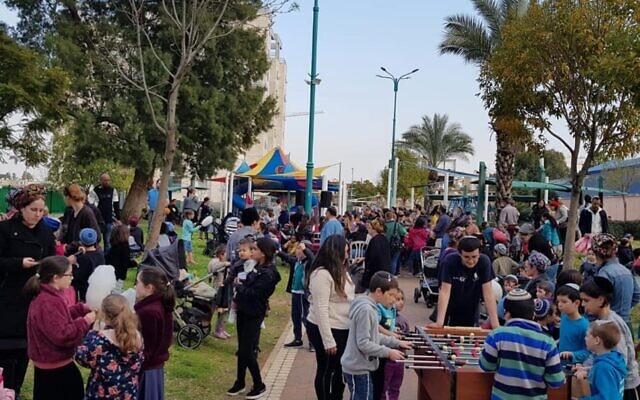 According to al-Naqib and other Arab residents who spoke to The Times of Israel, the Garin and its property were specifically targeted during the rioting. Most of the synagogues and buildings torched or damaged during the unrest were affiliated with the despised Garin Torani, they claimed.

“If you beat someone repeatedly, they will eventually strike back. That’s not an excuse for violence, but that’s how it is,” she said, seeking to explain the riots.

The Garin Torani’s supporters say they do not see their presence in the city as threatening.

“To put all this on the Jewish residents of Lod, who came to help the residents, that is tantamount to blaming the victims,” Lacks said.

Around 1:30 a.m. on May 11, Lod resident Moussa Hassouneh left his brother-in-law’s house, where he’d been invited to break the Ramadan fast. He was accompanied by three other Arab Israelis.

Arab Israeli residents had been protesting Israeli policies in Jerusalem on Monday night, as rockets began to fly from Gaza. After police sought to disperse a large crowd near Lod’s Great Mosque, the protest turned into a riot. Arab residents hurled stones and Molotov cocktails at Jewish homes and institutions, police said. 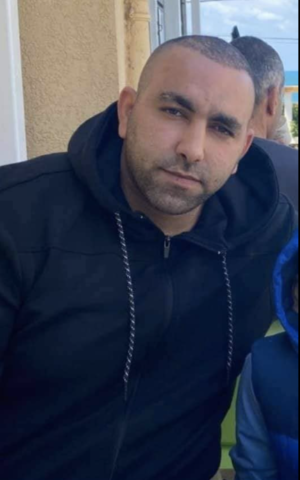 Mousa Hassouneh, who was shot dead by an Israeli civilian on Tuesday, May 11, 2021 in Lod (courtesy: Hassouneh family)

According to Hassouneh’s family, Moussa was uninvolved in the riots and merely sought to go home. But an armed Jewish resident, feeling threatened, fired into the crowd nearby, killing him.

“Moussa was no criminal nor a terrorist. He was a family man, who went from home to work and back home again, nothing more, before he was shot,” insisted Hassouneh’s father Malik as he sat in the courtyard of his home this week.

Hassouneh’s shooter was arrested along with a number of other Jewish Israelis on the scene. Right-wing politicians defended the shooter, whose name has not been released to the public, as merely standing his ground.

“The arrest of the shooter in Lod and his friends, who acted in this way in self-defense, is terrible,” Public Security Minister Amir Ohana wrote on Twitter, who wrote that if it were his decision, the shooter would be released.

On the night of May 11, thousands of Lod’s Arab residents attended Hassouneh’s funeral, which eventually became a melee of violence. Rioters hurled stones and Molotov cocktails at Jewish residents, setting swathes of the city ablaze. Lod’s Jewish residents dashed to save Torah scrolls from synagogues.

“This is a civil war… an Intifada of Arab Israelis. All the work we have done here for years [on coexistence] has gone down the drain,” said Revivo, deeming the night “Kristallnacht.”

Some of the Jewish victims, including Ehrlich, fled the city to wait for order to be restored. In response, Jews torched a Muslim cemetery and attacked a mosque in Lod. In the neighboring mixed city of Ramle, Jewish extremists — who had circulated a “self-defense” call on social media the afternoon before — gathered to hurl rocks at passing Arab cars. 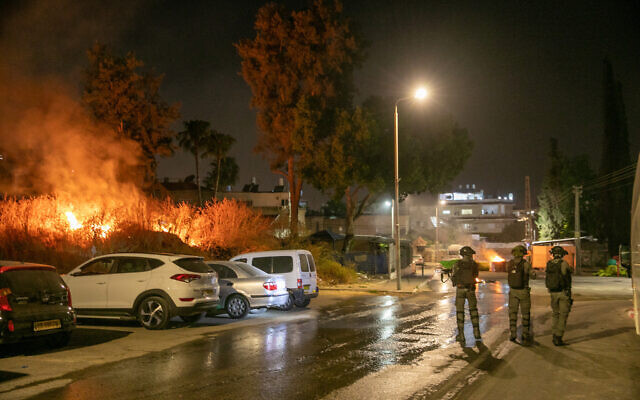 Hundreds of Jewish extremists arrived from outside the city on buses in the days following the Arab riots, attacking Arab passersby and property as the city descended into ethnically charged fighting. The Israeli police appeared to do little to apprehend the armed newcomers or control their movements, despite the alleged curfew.

The burn marks were still visible on the front of the local pre-military academy in the city’s Ramat Eshkol neighborhood earlier this week as religious volunteers sought to bind up the building’s wounds. The husks of Arab cars — allegedly torched by Jewish residents — moldered in the backyards of residents, like the decaying exoskeletons of enormous cicadas.

Some Arab residents have been arrested and charged for their roles in the attacks, but no Israeli Jews had been charged as of Thursday. Hassouneh’s Jewish Israeli shooter was arrested by police for a few days before being released without charges.

Despite the rise in violence, Garin residents say they hope to stay in Lod even as tensions in the city rise.

Standing by the torched front of the pre-military academy, high school Gemara teacher Shahar Ben-Haim said that to leave the city would be tantamount to surrender.

“If I leave here, it will reach Tel Aviv, Shoham and Modi’in. This is the front line, and those on the front lines get burned,” said Ben-Haim. 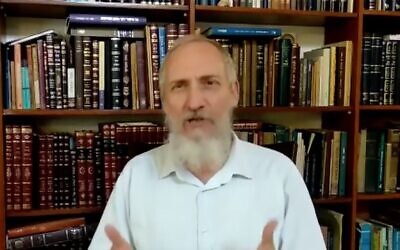 Rabbi Yisrael Samet, who leads the Garin Torani in the city of Lod. (Screen capture: Facebook)

“We’re here and we’re not leaving. Some families left briefly to take a breath, but most of us are still here, trying to rebuild. We’re here to stay,” agreed Rabbi Yisrael Samet, who leads the Garin.

That, at least, is a sentiment shared by some of Lod’s Arab Israeli residents.

Other Arabs, however, were less hopeful for the prospect of future coexistence alongside the Garin Torani.

“As long as those religious Jews are there, there will be conflict. They’re settlers,” seethed teenager Ali Nasasrah outside of Lod’s Great Mosque. “As long as they’re there, our blood will still run hot.”