Israel on Sunday began to roll back some of the major restrictions imposed as part of its third lockdown in late December to curb the spread of COVID-19, allowing commercial activity to resume and reopening additional schools.

From Sunday, streetfront shops, malls, markets, museums, and libraries will be open to all Israelis. But only those who have been vaccinated or have recovered from COVID-19 will be able to use gyms, enter sporting and culture events, hotels, and swimming pools. The full rules can be read here.

In addition, grades 5-6, and 11-12 will be permitted to resume in-person classes in low-infection cites and towns or medium-infected areas with high rates of vaccination. Kindergartens and grades 1-4 have previously opened in cities designated as low-infection “green” and “yellow” in the government’s color-coding system for morbidity rates. Grades 7-10 around the country are expected to continue remote learning for at least another two weeks.

Prime Minister Benjamin Netanyahu visited a gym in central Israel on Saturday night to urge Israelis to use a new “Green Pass” system. His plea came even as the Health Ministry website (Hebrew link) that issues the passes crashed hours before the system was to go into operation. By late Saturday night it was still not working.

Israeli women prepare their gym for the reopening next week at the Fithood Gym in Tel Aviv on February 16, 2021. (Avshalom Sassoni/Flash90)

The Health Ministry said vaccination certificates could be used as a “Green Pass” until the system was running properly.

“There are heavy loads on the service issuing the Green Pass, and therefore there may be difficulties,” the ministry said. “At the same time, most applications have been completed successfully and tens of thousands of people have already have their Green Pass.”

Netanyahu, accompanied by Health Minister Yuli Edelstein, urged Israelis to use the newly unveiled Green Pass. He conceded that there would be “problems in the beginning” with the implementation, but urged Israelis to persevere. 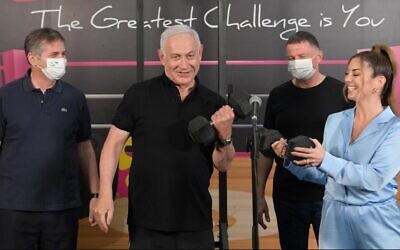 “Every one of you can use the application tomorrow,” Netanyahu said “The Green Pass will gradually open up the country, please use it.”

The pass has seen additional problems, with reports of thousands of people scheming to forge the pass to illegally partake in newly allowed activities.

Netanyahu also continued to urge people to go and get vaccinated amid increasing evidence the vaccines were 98.9% effective at preventing death caused by COVID-19. 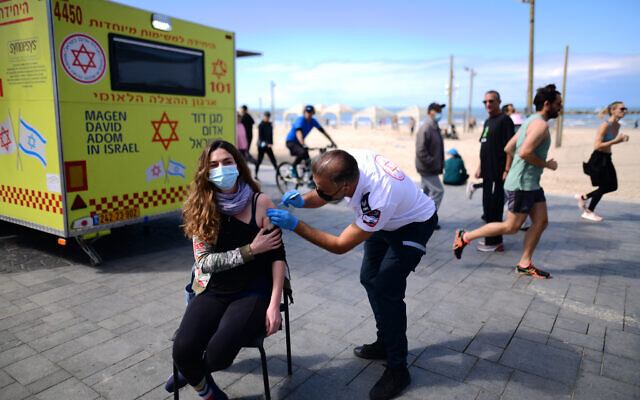 Israelis receive a COVID-19 vaccine injection at a mobile vaccine station on the beach in Tel Aviv, February 20, 2021. (Tomer Neuberg/Flash90)

Netanyahu said that Israel hoped to have 95 percent of people over the age of 50 vaccinated within 2 weeks.

“Go and get vaccinated, get the Green Pass and start to return to life,” he said.

Netanyahu also defended the decision to open up gyms and leisure before all schools were reopened. The government has been harshly criticized for keeping tens of thousands of kids out of school.

“We are opening the education system, but it is important that you understand — there is a pandemic, there is the British variant that harms young people and we still don’t know what its effect is,” Netanyahu said.

Ministers ruled on Thursday that children in grades 7-10 will remain at home, likely for another two weeks. Other grades have resumed classes in low infection areas. The move came despite fierce pressure from parent groups, including boycotts of Zoom lessons.

Schools were closed around the country for over a month under lockdown rules, before their partial reopening last week for younger students. 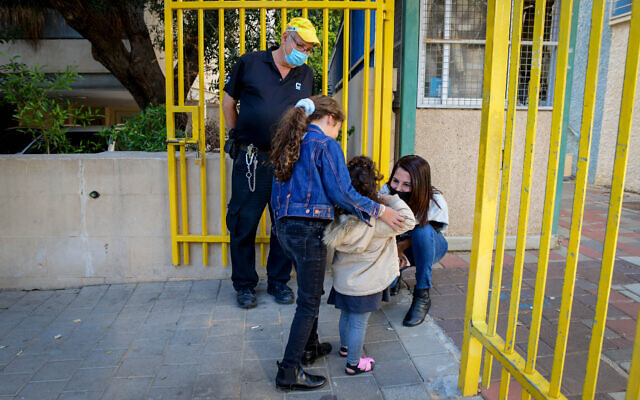 The Education Ministry on Thursday released a list of restrictions and requirements for educational institutions planning on holding events ahead of the Purim holiday.

Infection among children and school reopenings are a central concern during Israel’s third-wave virus outbreak. Children represent a larger proportion of infections than earlier in the pandemic, possibly due to the new virus variants and the fact that a significant share of adults have been vaccinated.

Earlier Saturday, Health Ministry Director-General Chezy Levy said that Israel planned to also vaccinate children once the vaccine was authorized for them, but did not give a timeline.

To be allowed to open Sunday, relevant businesses must scan people for the Green Pass and only accept those carrying it.

Meanwhile, Health Minister Yuli Edelstein reportedly warned that if there were violations of the Green Pass scheme, he would not hesitate to order the economy closed again.

“We will close the economy just as fast as were are now opening,” Channel 13 quoted him saying in a closed-door meeting. 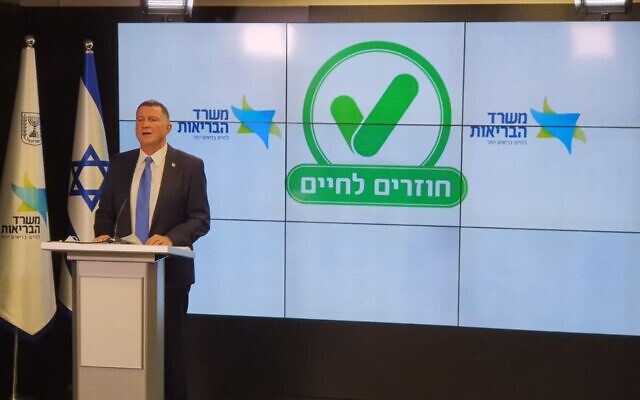 Health Minister Yuli Edelstein during the announcement of the “Green Pass” certification on February 18, 2021 (Health Ministry)

The coronavirus cabinet has also okayed the reopening of synagogues for the Purim holiday this coming week.

However, some restrictions remain firmly in place as the country continues to cautiously step out of its third nationwide lockdown, first launched on December 27 and extended four times.

Ministers decided Thursday to keep Israel’s border crossings, including those at Ben Gurion Airport, closed in light of the current infection rate. A joint statement from the Prime Minister’s Office and the Health Ministry said the country’s airport and land borders will remain closed for 14 more days, until March 6, except for urgent cases. 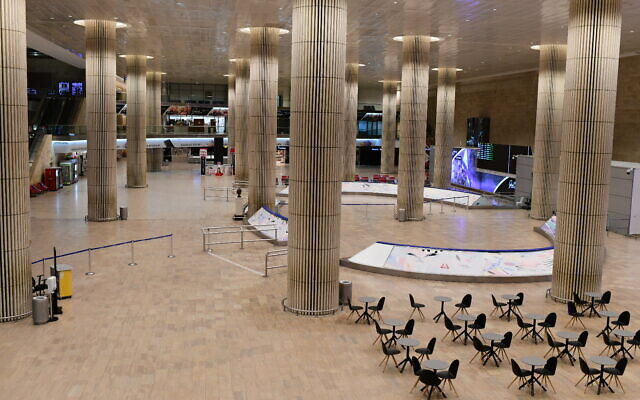 However, the Immigration Ministry said Thursday that six special flights were still authorized to land, carrying some 900 immigrants from Ethiopia, France, Russia, Ukraine and South America.

The new arrivals will be subject to quarantine upon landing in Israel, the ministry said in a statement.

Also Sunday, the IDF’s Home Front Command was launching a stepped-up vaccination drive in particular cities, in an effort to reach 95 percent vaccination rate in those areas by next week and turn them into the first immunized cities worldwide, the Walla news site reported. The first cities and towns to partake in the program include Jerusalem, Kiryat Shemona, Kuseife, and Meitar.

Over 4.2 million Israelis have received their first vaccine dose, and over 2.8 million have gotten both shots, among the country’s population of about 9 million. Around 3 million Israelis are not currently eligible to be vaccinated, including those younger than 16 and people who have recovered from COVID-19, among others.

The Health Ministry said Friday there were 49,867 active virus cases in Israel, including over 4,000 infections diagnosed on Thursday, bringing the total since the start of the pandemic to 743,814. The test positivity rate on Thursday was 6.2%.

There were 858 serious cases, including 295 people on ventilators. The death toll stood at 5,521.