COZUMEL, Mexico — When Nataniel Moshe Sagi first came to Mexico and learned about bees that don’t sting, he says he fell in love. He had no idea that such bees existed and was alarmed to learn that after being on this planet for millions of years, they were now in danger of dying out. So he uprooted permanently to Mexico and now runs a bee conservation sanctuary on Cozumel Island, where he keeps several species of stingless bees and gives tours to visitors.

“They are my friends,” the 24-year-old Sagi assures visitors to his bee sanctuary on a recent afternoon as he lifts the lid off a wooden box where his bees live. “They know the flower where they collected the pollen yesterday, so of course they know me. There are experiments showing that bees have great memory and they can recognize faces.”

Sagi has five species in his sanctuary. The best known is Melipona beecheii. It produces a thin honey that is sour — and delicious. The ancient Maya kept these bees in their villages for thousands of years, held ceremonies around them and even worshiped a bee goddess. They valued the honey for its medicinal properties, Sagi says — adding that it helps with eye infections and that the Maya believed it eases childbirth — and even made an alcoholic beverage from it.

In the 16th century, Spanish friar Diego de Landa noted in his book that “they make wine from honey, water and the root of a certain tree that they cultivated for this purpose,” saying the drink “was strong and smelled foul.” The bees were so important to the Maya that in the Madrid Codex, one of only four ancient Maya books that survived to our time, an entire 14 pages are devoted to bees, Sagi says.

Another species in his sanctuary is tiny. Sagi says that this bee — called the Plebeia mourena — might be the smallest social bee in the world.

Nataniel Sagi discusses the bee species he keeps at his sanctuary on Cozumel Island in Mexico, March 2021. (Julie Masis)

A third species is characterized by being shy, as Sagi puts it. Even when their hive is opened these bees are hard to find, as they build an extra layer inside.

Only one species in Sagi’s sanctuary will attack people in the wild. But even these bees — called “Kanzak” in Mayan, meaning “yellow,” because they appear yellow in sunlight — don’t sting, they bite.

Sagi explains that the Kanzak bees have become hostile to humans because the ancient Maya had an annual ceremony wherein they went into the jungle to take the honey from these bees and then left the hive on the ground to die. They worshiped one species of bee — the Melipona beecheii, which in Mayan means “the royal bee lady” — and didn’t care much for other species, Sagi says. 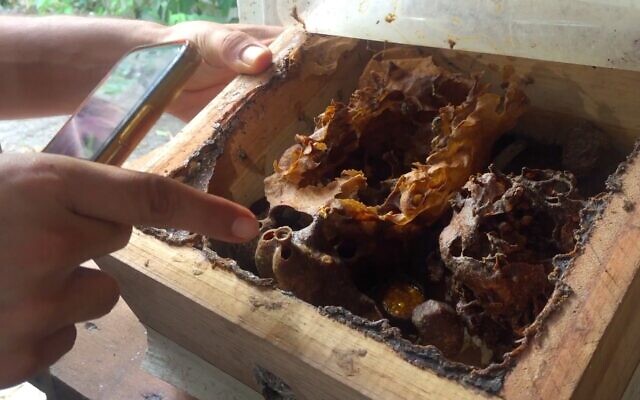 Nataniel Sagi shows the inside of a beehive at his sanctuary on Cozumel Island in Mexico, March 2021. (Julie Masis)

In the hive, every bee has a job. There is the queen of course, but even the workers specialize in different jobs — some bees are cleaners, others collect pollen, still others are guards. The guard bee keeps watch over the entrance to the hive. When someone approaches the little hole through which bees enter, the guard stands up on its back legs to make itself look bigger, Sagi says. The jobs that the bees are assigned change as they age.

They’re one of the best societies in nature

“In my opinion, they’re one of the best societies in nature. Each bee fights and lives for the long-term wellbeing of the colony. You can say they are a kind of a kibbutz,” Sagi says. “They’re not selfish. They will sacrifice their lives if needed for the colony. They will not eat if there is not enough for the colony. They only eat when the queen tells them it’s okay to eat.”

Sagi is a proud vegetarian and does not harvest honey from his bees, keeping them solely for the sake of conserving them, he says.

“When you observe them, you see how much they work for it, [so taking their honey] just seems like stealing,” he says. 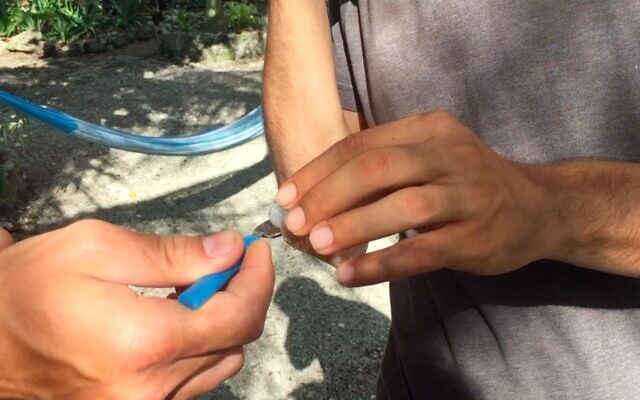 Nataniel Sagi offers a taste of honey from the bees he keeps at his sanctuary in Cozumel Island, Mexico, March 2021. Sagi doesn’t harvest the honey on a large scale, but rather protects the bees, which come from endangered species. (Julie Masis)

About 10 years ago, it seemed that stingless bees were on the path to quick extinction, says University of Arizona at Tucson ecology Prof. Stephen Buchmann, who surveyed the stingless bee populations of the Yucatan peninsula.

“Fortunately, our prediction has not come true,” Buchmann says. “They recovered a little bit, but their existence is sort of precarious.”

If we lose them as pollinators, we will also lose the native forests of the region

Just as precarious is the fate of the tropical forests in the Americas, which rely on stingless bees to pollinate the native trees, according to Buchmann.

“If we lose them as pollinators, we will also lose the native forests of the region,” he says. 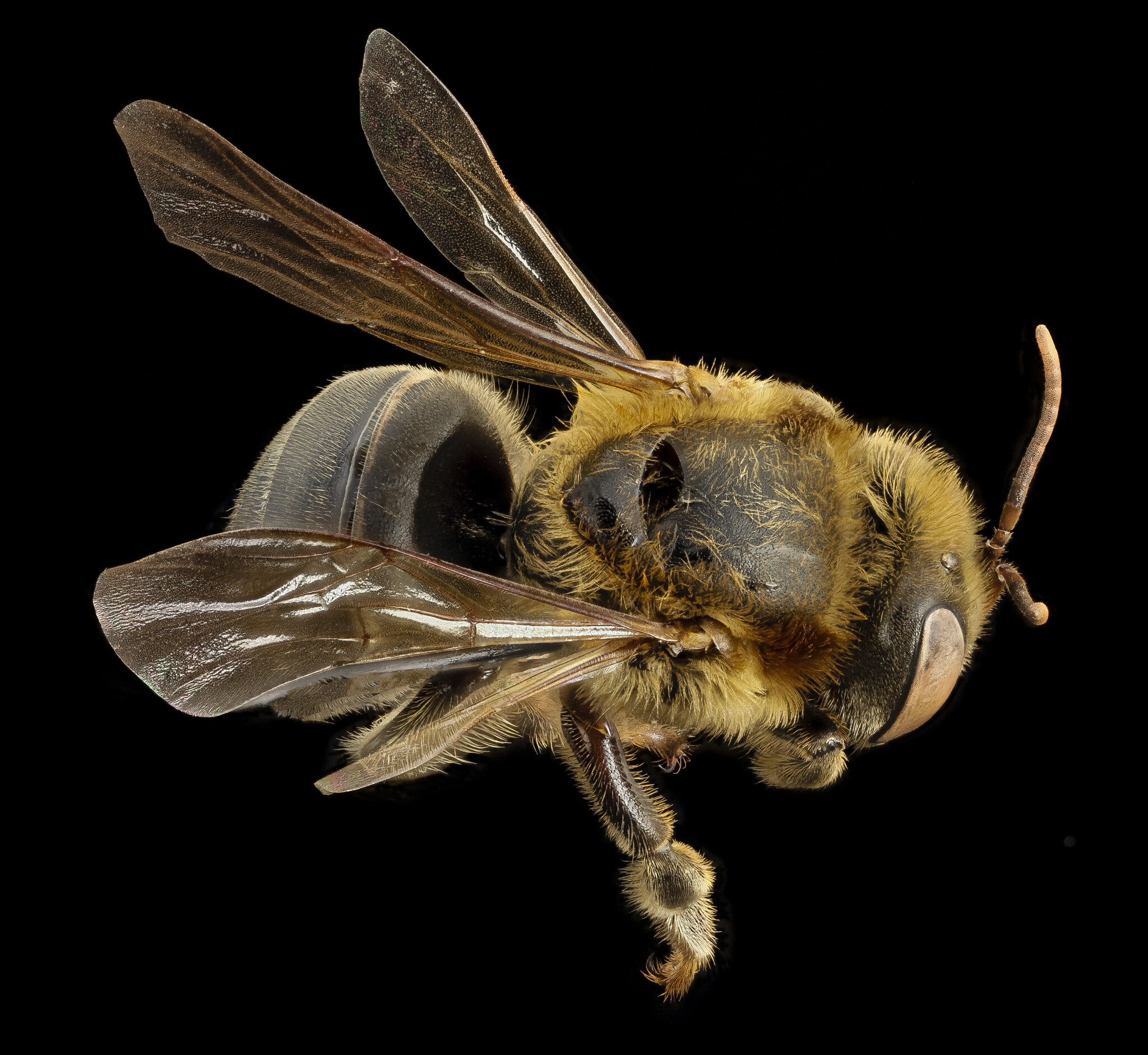 Member of the stingless Melipona species of honey bees. (Public domain via wikipedia)

Stingless bees are threatened by deforestation, pesticides and the fact that Mayan beekeepers have stopped passing the occupation down to their sons, who are leaving the villages to work in the tourism industry, says Buchmann.

Another problem, paradoxically, is the growing popularity of the delicious honey of the Melipona beecheii, which has tripled or quadrupled in price in recent years, he says.

“Their honey is so valuable that traditional Yucatan beekeepers started to harvest more honey per colony, and it wasn’t sustainable,” Buchmann says.

Still, the most obvious problem for stingless bees seems to be rapid urbanization. 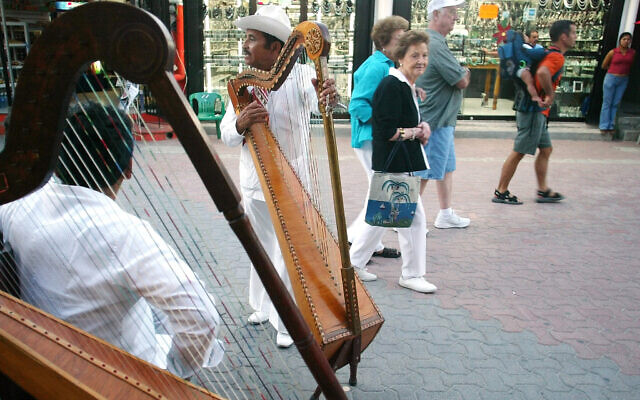 Locals in the municipality of Playa del Carmen, a short ferry ride from Cozumel Island, remember how 15 years ago it was just a fishing village with unmarked streets. Now Playa is a bustling city with nightclubs, traffic jams, and high-rise buildings.

Indeed, Sagi says he obtained his first bees from a Mayan beekeeper in Playa del Carmen who could not rescue all the hives in need of saving.

Now the young Israeli has started rescuing bees by himself on Cozumel Island.

“I started going and looking around where people deforest, and looking for bees on the ground,” he says. “Some animals might be able to run away, but with stingless bees, they simply cannot escape because the queen cannot fly, so the colony cannot move.” 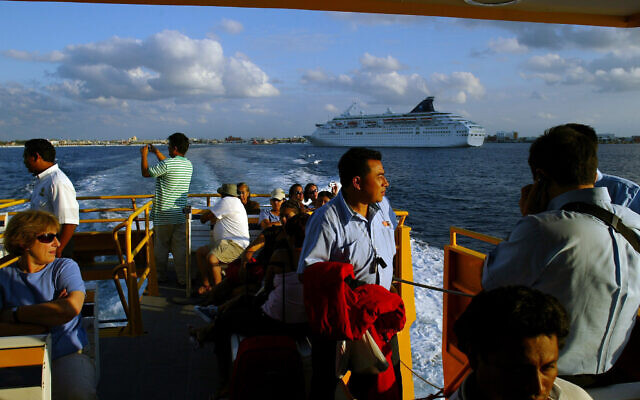 In his bee sanctuary, Sagi has planted flowers and flowering trees, coconuts, bananas, guava, dragon fruit and sugar apple. He has two dogs and a black cat, Panthero, that chases the lizard that likes to snack on bees away from the hives.

It is idyllic and beautiful.

But until humans stop logging, the problems the stingless bees face will not go away, Sagi says.

“All acts of conservation are just bandaids,” he says.