The Defense Ministry said on Monday that a plane-mounted laser it is developing successfully shot down several drones, in some cases from more than a kilometer away, over the Mediterranean Sea, as part of an initial test of the system.

According to the head of the ministry’s research and development team, Brig. Gen. (res.) Yaniv Rotem, a fully functional prototype of the plane-mounted, solid-state laser is at least three to four years away, though a ground-based version of the system, capable of shooting down rockets and mortar shells in addition to small drones and larger unmanned aerial vehicles, is expected to not only be operational but to be in use by the Israel Defense Forces by the end of 2024.

“We will perform an operational test by the end of this year, and… when it works — within three years — we will have a laser in the Gaza area,” Rotem told reporters on Monday.

The trial, which is planned for later this year, will test the system’s ability to shoot down incoming rockets and mortar fire at close range, approximately eight to 10 kilometers (5-6 miles) away, as well as UAVs. The test was meant to be held sooner, but work on the system was delayed by both the coronavirus pandemic and “technical issues we encountered,” Rotem said.

According to the Defense Ministry, the benefit of such a laser, both in the air and on the ground, is that the price per interception is negligible compared to that of the Iron Dome air defense system’s interceptor missiles, each of which costs tens of thousands of dollars. So long as there is a constant source of energy for the laser, there is also no risk of ever running out of ammunition.

The downside of a laser system is that it does not function well in times of low visibility, when there is heavy cloud cover and other inclement weather. The plane-mounted model of the laser is meant to get around this limitation somewhat by putting the system above the clouds.

The ground-based laser system, which is being developed with the Rafael weapons manufacturer, is not meant to replace the Iron Dome or Israel’s other air defense systems, but to supplement and complement them, shooting down smaller projectiles and leaving larger ones for the more robust missile-based batteries, Rotem said.

A high-powered laser system installed on a Cessna aircraft burns a hole in a drone over the sea as part of a test of the system by the Defense Ministry and Elbit Systems weapons contractor in June 2021. (Defense Ministry)

In the test of the plane-mounted system, which was held over the course of last week, the high-powered laser was installed in a Cessna Grand Caravan aircraft and sent to locate and shoot down an unspecified number of UAVs — fewer than 10, according to Rotem — using an autonomous detection and tracking system.

“We successfully intercepted several UAVs in the air, within a range of more than one kilometer (0.6 miles). This is a groundbreaking technological achievement and it is critical for further development of our airborne high-power laser system,” Rotem said.

“This is the first time in the State of Israel that we have succeeded in doing this. And to the best of my memory, we are one of the few in the world to do so, if anyone else has even done it,” he declared.

According to the Defense Ministry official, the plane-mounted system is eventually meant to be able to shoot down drones from dozens of kilometers away and potentially even greater distances.

The plane-mounted laser was developed in a joint effort by the Defense Ministry’s Research and Development Directorate and the weapons contractor Elbit Systems. The test was conducted by the two groups, in coordination with the Israeli Air Force and its Missile Test Unit. 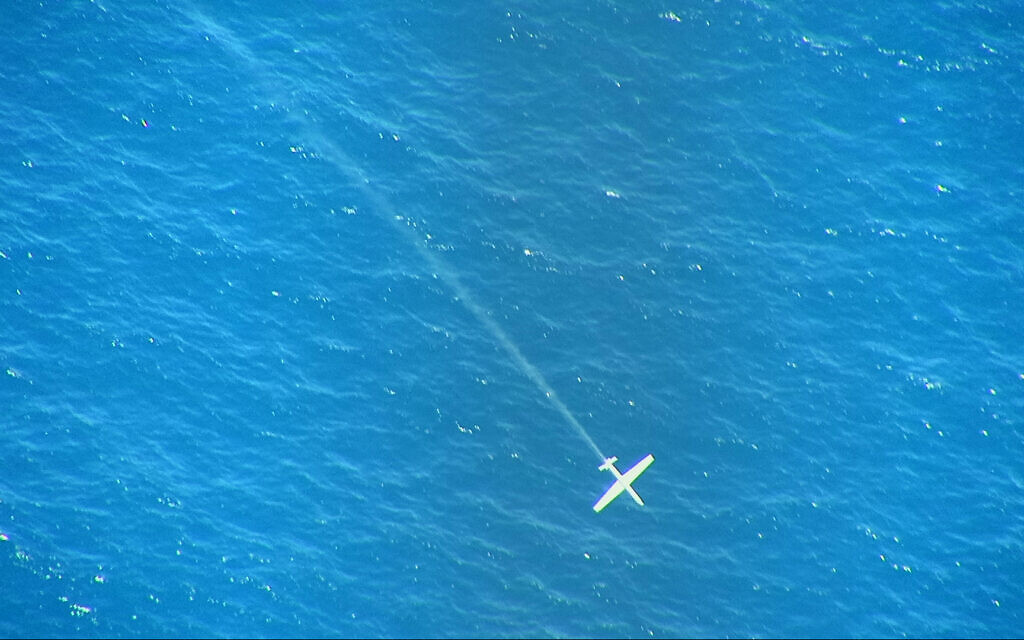 A high-powered laser system installed on a Cessna aircraft causes a drone to crash into the sea as part of a test of the system by the Defense Ministry and Elbit Systems weapons contractor in June 2021. (Defense Ministry)

Rotem stressed, however, that while the trial was successful and represented a “significant and critical milestone,” it was only an initial test of the system, with years more of work needed before the plane-mounted laser would be fully operational.

The Defense Ministry official said the laser used a “highly advanced optical targeting system, with tracking capabilities and artificial intelligence” to locate a target “at highly precise levels of accuracy.”

In a video of one of the tests (above), the laser can be seen locking onto the target drone, burning a hole through it over the course of several seconds and eventually causing it to crash into the sea.

While the laser system is currently meant to be used defensively on larger aircraft, Rotem acknowledged that it could also be employed as an offensive weapon in fighter jets.

“The plan we are working on with Elbit is meant for a plane the size of a Boeing, and we will prove it works on that well. In the future, we can make it smaller and if we want, we can put it on a more dynamic platform. Currently, we are talking about a defensive formation. But as time passes and we have more capabilities, we could also use it on the attack,” he said.

The test came a year after the Defense Ministry announced it had made a major breakthrough in the development of the laser system, following years of investment in research efforts by defense contractors and academic scientists. 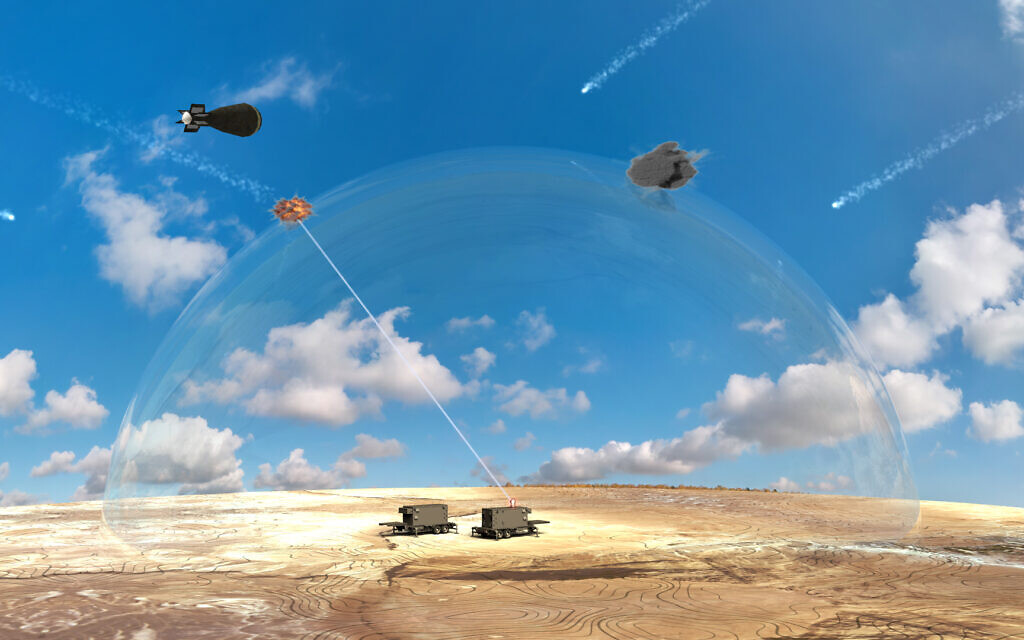 A computer-generated mockup of a proposed laser-based air defense system being developed by Israel’s Defense Ministry, on January 8, 2020. (Defense Ministry)

Israel has for decades been working to develop a laser-based system to intercept incoming projectiles, but has so far failed to produce a viable option, due to cost issues and technological limitations.

In December 2018, the Israeli financial newspaper Globes reported that former defense minister Avigdor Liberman had ordered the Defense Ministry to begin investing heavily in laser technology in both funding and attention in order to speed up the production of a viable prototype.

On Monday, Defense Minister Benny Gantz lauded the test of the plane-mounted laser.

“I would like to congratulate the Directorate for Defense R&D, Elbit Systems and the IAF on the technological breakthrough they have achieved. Today you have brought us closer to yet another important milestone in the development of the multi-tier defense array of the State of Israel, and it is significant both in terms of cost-effectiveness and defense capabilities,” he said.

“The laser system will add a new layer of protection at greater ranges and in facing a variety of threats, securing the State of Israel while saving the costs of interception,” Gantz added.

The Lebanese Hezbollah terror group is believed to maintain an arsenal of some 130,000 rockets, missiles and mortar shells, which the military believes would be used against Israel in a future war. The two largest terror groups in the Gaza Strip, Hamas and the Palestinian Islamic Jihad, are also each believed to possess thousands of rockets and mortar shells, even after firing upwards of 4,000 projectiles at Israel during last month’s 11-day battle.

Against these and other threats, Israel operates a multi-tiered air defense array, made up of the short-range Iron Dome, the medium-range David’s Sling and the long-range Arrow and Patriot systems.