Interior Ministry workers have been told to not process any requests by Palestinians from the West Bank or Gaza Strip seeking to obtain Israeli residency through marriage to Israelis, Army Radio reported Sunday.

The report, which did not cite any sources, said that officials in the ministry were waiting to see if Interior Minister Ayelet Shaked will again try to renew the so-called Palestinian family reunification law, which blocks that route to citizenship.

In the meantime, a sweeping order has been issued telling ministry workers that they should not process any such requests. The report did not clarify who initiated the order.

According to the Kan public broadcaster, Shaked, a proponent of stricter controls on Palestinians receiving residency, has privately said that she will refuse each individual case of Palestinian family unification until new restrictions are passed. Human rights groups would likely petition the High Court against a blanket policy like this.

The legislation, which prevents Palestinians who marry Israeli citizens from automatically receiving citizenship or residency, faced a rocky time on the Knesset floor where it was defeated after a member of Shaked’s own Yamina party voted with the opposition last week.

The early-morning vote — after an all-night debate — ended in a 59-59 tie, meaning the law expired Tuesday.

Shaked on Saturday hit out at Yamina MK Amichai Chikli for casting his deciding vote with the opposition.

In a potential further obstacle on Sunday, a lawmaker from the coalition’s Ra’am party announced that the Islamist faction would not vote on laws brought to the Knesset until further notice. The party is vital for the government to maintain its razor-thin majority in the Knesset.

MK Waleed Taha did not give a reason for the move, which would cripple the government and almost certainly prevent the reunification law, which Ra’am opposes, from being passed. 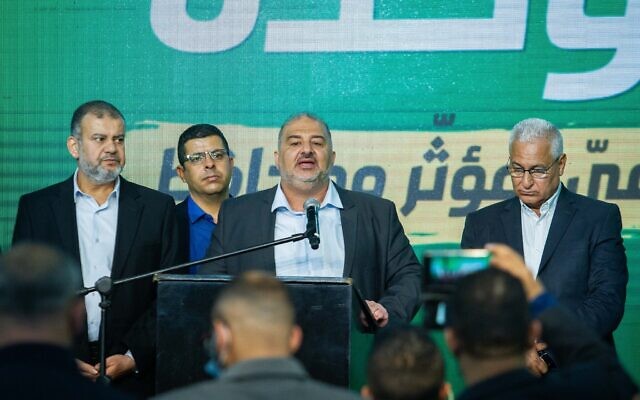 The Citizenship and Entry Law, which the government wants to extend, was first enacted in 2003, and has been extended annually.

The stated prime concern at the time was that some Palestinians gaining Israeli status would engage in terrorism, but there was also a demographic goal: The security establishment assesses that some 200,000 Palestinians would gain Israeli citizenship or residency each decade were it not for this legislation, Channel 12 News has reported.

Between 1993 and 2003, around 130,000 Palestinians were given Israeli citizenship or residency through family unification, including children, according to court filings. The Shin Bet security service told the Knesset last that between 2001 and 2021, about 48 of those were involved in terror activities.

Jews and their relatives who immigrate to Israel do so under the 1950 Law of Return, which entitles them to citizenship almost immediately. But for most foreign nationals, the process is more complicated, involving Israel’s 1952 Entry Into Israel Law.

With the Citizenship and Entry Law no longer in force as of last week, Palestinians married to Israelis will be processed under the 1952 law. The law provides a gradual path to citizenship: first a B-1 work visa, then temporary residency, then permanent residency and citizenship.

There are currently around 13,500 open cases of Palestinians applying for family unification that were frozen from the moment the 2003 law first came into effect. To be processed, each case must be examined by the Shin Bet security service and then by the Interior Ministry itself on an individual basis. 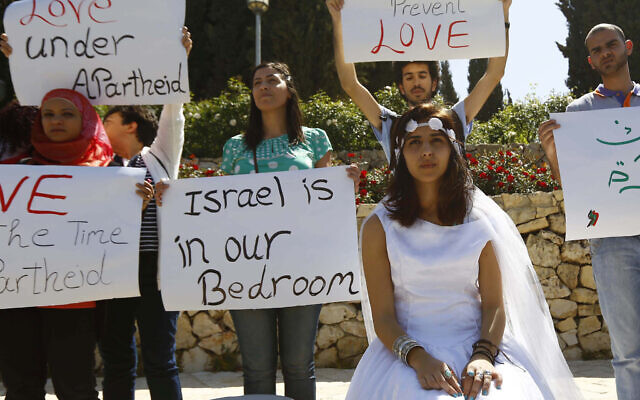 Around 12,700 Palestinians married to Israeli citizens are already living inside Israel on temporary permits. They are also likely to apply for citizenship or permanent residency, depending on whether their spouse is an Arab Israeli or a Palestinian resident of Jerusalem.

Around 9,700 of these permits are military-issued “stay permits,” while another 3,500 are temporary A-5 visas, according to the human rights organization HaMoked. The latter have been issued by the Interior Ministry either to families who were in the process of family reunification before the 2003 law or in exceptional humanitarian cases, said Reut Shaer, an attorney at the Association for Civil Rights in Israel.

The Shin Bet security agency, in an opinion widely quoted in Hebrew media in recent days, has stated that “the primary danger posed by family reunifications stems from the potential recruitment [of Palestinians who become Israeli citizens or residents] by terrorist organizations, and their high potential to act as lone terrorists.”

While the right-wing Likud and Religious Zionism opposition parties support the law in principle, they voted against extending it, along with the ultra-Orthodox parties and the predominantly-Arab Joint List party, to embarrass the government.