THE HAGUE, Netherlands — A fugitive Hezbollah suspect convicted of the assassination of Lebanon’s former prime minister Rafiq Hariri cannot appeal the verdict until he turns himself in, a UN-backed court said Tuesday.

Salim Ayyash was found guilty in absentia and sentenced to life imprisonment last year by the Special Tribunal for Lebanon in the Netherlands over the killing of Hariri in a suicide bombing in Beirut in 2005.

The 57-year-old Ayyash remains on the run, with Hassan Nasrallah, the head of the Shiite Hezbollah terrorist group, refusing to hand him over or to recognize the court’s authority.

Ayyash’s defense team appealed the decision in January but the court said on Tuesday that under its rules that he was not allowed to do so while still a fugitive from justice.

Judges, the prosecution and defense lawyers are seen on screens via video link due to COVID-19 measures, at the start of the session of the United Nations-backed Lebanon Tribunal in the sentencing of Hezbollah member Salim Jamil Ayyash in the assassination of former Lebanese Prime Minister Rafik Hariri and 21 others, December 11, 2020 (AP Photo/Peter Dejong, Pool)

“The legal framework for in absentia proceedings at the STL does not contemplate a defense appeal in absentia,” the court said in a statement on the decision by a majority of the court’s judges. “Counsel for Mr. Ayyash have not been appointed nor accepted by Mr. Ayyash, who absconded and has not been found. An arrest warrant against Mr. Ayyash is outstanding.”

The court added that Ayyash under international law retained “the right to appeal the judgments if he appears, or request a retrial.”

Prosecutors have appealed against the acquittal of three other suspects — also in absentia. 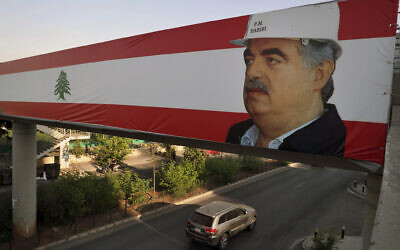 Sunni billionaire politician Hariri was among 22 people killed in a huge truck bombing that also injured 226 others.

Ayyash also faces a separate case at the tribunal for three attacks on politicians in Lebanon that is due to open in June.

The United States in March offered a reward of $10 million to find Ayyash.