Israeli scientists have invented a method to perform blood tests without drawing a drop — and are launching their device into space for testing.

The scientists say their technology will enable the world’s first sample-free blood count tests, which assess the number and type of cells in a patient’s blood and normally require lab analysis of a blood sample drawn from a finger or arm. Their device scans the eye for a few seconds, and instantly provides accurate results, the researchers say.

The Sheba Medical Center team behind the innovation is working on expanding it to perform other blood tests that currently require samples and lab analysis.

“Opening up the possibility of needle-less blood tests is truly exciting,” Harel Baris, one of the Sheba doctors behind the new tech, told The Times of Israel.

He is sending the tech into orbit in October with Israeli space tourist Eytan Stibbe, hoping that zero gravity testing will help the development process.

Despite widespread fears of needles and the high cost of lab testing, there has been limited progress towards needle-less tests. Last year Purdue University announced that it was developing an app to assess anemia by taking a photo of the eyelid, but the technology doesn’t have potential for other blood tests.

Baris said his device will reduce the need for people to go to clinics in the future for some blood tests, as they will check themselves at home and results will be sent directly to doctors.

“It won’t only be more comfortable for patients, but will also open up new possibilities for extending remote care, and provide people the ability to integrate medical care with their normal life,” he said.

On Monday, Baris and Sheba’s top retina expert, Prof. Ygal Rotenstreich, showcased the technology to Stibbe, who is going to the International Space Station in October. Stibbe is running experiments and testing technologies for numerous Israeli organizations during his trip, and will be using the device to monitor his health. 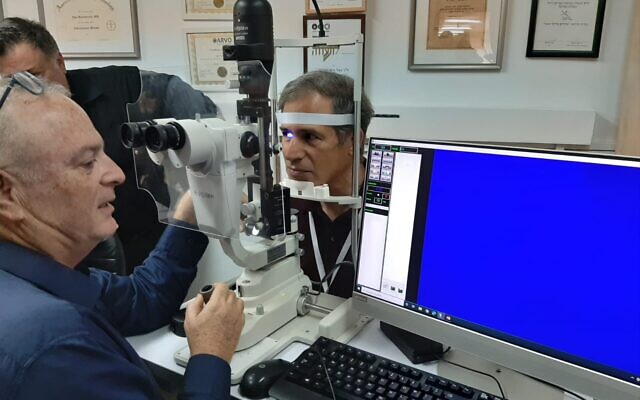 Prof. Ygal Rotenstreich conducts a spectral eye imaging test on Israeli space tourist Eytan Stibbe, as part of preparations for him to take a device that will measure his blood count by examining his eyes. (courtesy of Sheba Medical Center)

This will test the device’s ability to operate in microgravity, where factors that could be skewing test results on Earth — such as unknowingly having tears during the eye scan — are absent. Unlike on Earth, where one can tear up without realizing, in space the tears form a ball on the eye or face.

The space test will also assess the device’s suitability for astronauts, who currently need to give samples for analysis, an expensive and time-consuming process. 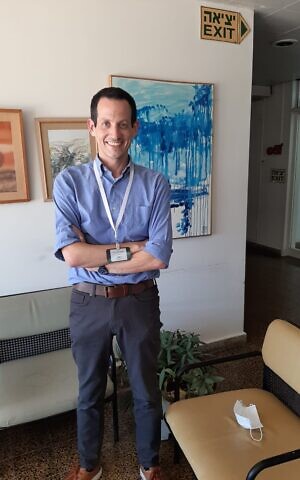 “Our technology is built on the fact that there are blood vessels in the eye that are transparent, meaning that we can analyze them using light waves,” said Baris. “We then gather information that usually needs lab analysis of actual samples.”

As well as performing blood count tests, the device delivers an accurate reading of oxygen saturation levels, which are today normally taken by oximeters that slot onto the end of a finger. But there are major questions about oximeters, after America’s Food and Drug Administration raised concerns in February that they lack accuracy for non-white people.

The FDA cited research saying that they “may be less accurate in people with dark skin pigmentation.”

Baris said: “Regular finger sensors are color-biased, but ours works in a totally different way — by analyzing blood in the eye — and will correct this problem.”