Iran may be able to amass sufficient weapons-grade uranium for an atomic bomb within a month, a new report warned Monday, as the Islamic Republic continues to ramp up its violations of the 2015 accord limiting its nuclear program for sanctions relief.

The experts at the Institute for Science and International Security examined a recent report by the UN’s atomic agency (IAEA) concerning Iran’s compliance with the nuclear deal, known formally as the Joint Comprehensive Plan of Action.

“Overall, the IAEA’s latest report shows Iran’s rapidly advancing nuclear activities and steps to limit IAEA monitoring, while inspectors have a diminishing ability to detect Iranian diversion of assets to undeclared facilities. The IAEA is sounding an alarm to the international community accordingly,” the report warned.

The experts, led by former UN nuclear inspector David Albright, noted Iran has continued to grow its stockpile of highly enriched uranium in recent months, predicting that in “a worst-case breakout estimate” Tehran could have enough fissile material for a nuclear weapon in a month.

After three months, the report said, Iran could have enough enriched uranium for two weapons; after five months, for three.

The estimate does not include the time it would take Iran to actually assemble a nuclear bomb, which would be far longer.

Unnamed US Federal officials would not confirm the possible breakout time but acknowledged to The New York Times that Iran could have enough fissile material for a nuclear weapon in a few months.

Albright said Iran’s recent conduct suggested it is trying to improve its hand at the negotiating table under new hardline President Ebrahim Raisi, with the aim of securing more favorable terms in talks on restoring the 2015 agreement following former US president Donald Trump’s withdrawal from the deal and reimposition of sanctions on Tehran.

“We have to be careful,” he was quoted as saying at a Friday press conference by the Times, “not to let them scare us.”

The report came a day after the IAEA and Iran clinched a deal over access to surveillance equipment at Iranian nuclear facilities.

The footage will be handed over to the IAEA if and when there is an agreement between Iran and world powers on the revival of the 2015 nuclear pact. Talks to revive the agreement are currently stalled, with Iran warning it may be months before they restart.

Little progress has been made on another issue relating to longstanding questions the IAEA has had about the previous presence of nuclear material at undeclared sites in Iran.

The agency has said in numerous reports that Iran’s explanations about the material have not been satisfactory.

IAEA Director General Rafael Grossi told reporters Monday at the start of a meeting of the agency’s board of governors that it was a delicate moment for international diplomacy on the Iranian nuclear issue.

Asked whether now was the time to be tougher with Iran on the issue, Grossi replied that “from day one I have had an approach with Iran which is firm and fair.” 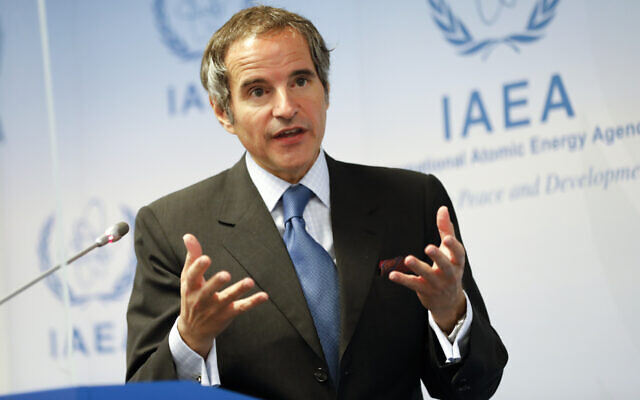 Director General of the International Atomic Energy Agency Rafael Mariano Grossi, from Argentina, addresses the media during a news conference regarding the agency’s monitoring of Iran’s nuclear energy program at the International Center in Vienna, Austria, on June 7, 2021. (AP Photo/Lisa Leutner)

In the run-up to this week’s board of governors meeting there had been speculation that Western countries may push for a resolution censuring Iran, but a diplomatic source told AFP that the deal struck over the weekend had “in principle removed” that possibility.

The Javan daily said it meant “Iran had not revealed its secrets to the agency,” while the Vatan-e-Emrouz newspaper titled its coverage “Eyes wide shut.”

Asked how difficult it would be to reconstruct information once the IAEA gains access to the footage, Grossi admitted that “it’s something that has to a certain extent never been done before but it’s not… beyond the capacity of my technical teams.”

However, he confirmed that the agency still has access to footage “as often as required” from sites such as Iran’s enrichment plants at Natanz and Fordo.