TEHRAN, Iran (AP) — An adviser to Iran’s supreme leader who is a possible 2021 presidential candidate has warned that any American attack on the Islamic Republic could set off a “full-fledged war” in the Mideast in the waning days of the Trump administration.

Speaking to The Associated Press, Hossein Dehghan struck a hardline tone familiar to those in Iran’s paramilitary Revolutionary Guard, a force he long served in before becoming a defense minister under President Hassan Rouhani.

A soldier has yet to serve as Iran’s top civilian leader since its 1979 Islamic Revolution, in part over the initial suspicion that its conventional military forces remained loyal to the toppled shah. But hardliners in recent years openly have suggested Iran move toward a military dictatorship given its economic problems and threats from abroad, particularly after US President Donald Trump pulled America out of Tehran’s 2015 nuclear deal with world powers.

Dehghan, 63, described himself as a “nationalist” with “no conventional political tendency” during an interview in his wood-paneled office in downtown Tehran. He’s one of many likely to register to run in the June 18 election as Rouhani is term-limited from running again. Others likely include a young technocrat with ties to Iranian intelligence and former hardline president Mahmoud Ahmadinejad.

Dehghan’s military service came under presidencies representative of the groups that largely compose Iran’s tightly controlled political arena — reformists who seek to slowly change Iran’s theocracy from within, hardliners who want to strengthen the theocracy and the relative moderates between. Those calling for radical change are barred from running for office by Iran’s powerful constitutional watchdog known as the Guardian Council, which serves under Supreme Leader Ayatollah Ali Khamenei.

While discussing the world Iran finds itself in, Dehghan’s points mirrored many of Khamenei’s. The former head of the Guard’s air force who achieved the rank of brigadier general said any negotiations with the West could not include Iran’s ballistic missiles, which he described as a “deterrent” to Tehran’s adversaries.

Propaganda involving Iran’s missile program has surged in recent weeks. The front page of the English-language Tehran Times on Wednesday showed a map of Iran’s missile ranges with red stars marking American bases across the region under the words “Back off!” printed in big, bold letters. A headline above warned Iran would respond to “any melancholy adventure by Trump.”

“The Islamic Republic of Iran will not negotiate its defensive power… with anybody under any circumstances,” Dehghan said. “Missiles are a symbol of the massive potential that is in our experts, young people and industrial centers.”

Dehghan warned against any American military escalation in Trump’s final weeks in office.

“A limited, tactical conflict can turn into a full-fledged war,” he said. “Definitely, the United States, the region and the world cannot stand such a comprehensive crisis.”

US President-elect Joe Biden has said he’s willing to return to the nuclear deal, which saw sanctions on Iran lifted in exchange for Tehran limiting its uranium enrichment, if Iran first complies with its limits. Since Trump’s withdrawal, Iran has gone beyond all the deal’s restrictions while still allowing United Nations nuclear inspectors to work in the country. Dehghan said those UN checks should continue so long as an inspector is not a “spy.”

In the time since, an advanced centrifuge assembly plant at Iran’s Natanz nuclear site exploded and caught fire in July. Dehghan said that reconstruction at Natanz was ongoing after satellite photos showed new construction at the site. He described the incident as “industrial sabotage.”

“Those who were in charge of installing some devices possibly made some changes there that led to the explosion,” Dehghan said, without elaborating. 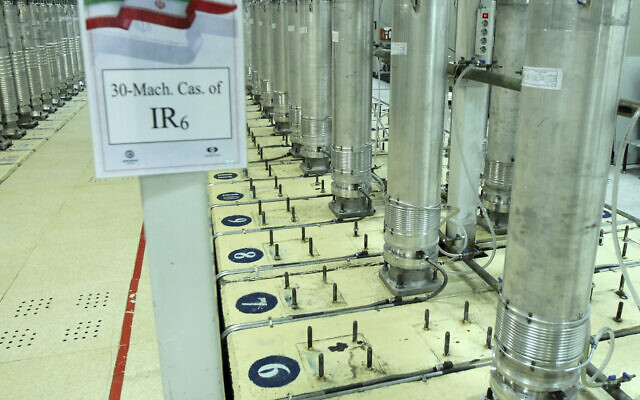 A Dehghan presidency likely would be looked upon with suspicion in Washington and Paris. As a young commander in the Guard, Dehghan oversaw its operations in Lebanon and Syria between 1982 and 1984, according to an official biography given to Iran’s parliament in 2013. Israel, Iran’s archenemy in the Mideast, had just invaded Lebanon amid that country’s civil war.

In 1983, a suicide bomber in a truck loaded with military-grade explosives attacked a US Marine barracks in Beirut, killing 241 American troops and 58 French soldiers. While Iran long has denied being involved, a US District Court judge found Tehran responsible in 2003. That ruling said Iran’s ambassador to Syria at the time called “a member of the Iranian Revolutionary Guard and instructed him to instigate the Marine barracks bombing.”

Dehghan vehemently denied he was involved in the bombing, though he was the Guard’s top commander there at the time.

“The US tries to link anything happening in the world to someone in Iran,” he said. “Do they really have evidence? Why do they link it to me?”

While stressing he wanted to avoid conflict, Dehghan claimed Israel was expanding its presence in the Mideast and warned that could turn into a “strategic mistake.” Israel just reached normalization deals with Bahrain and the United Arab Emirates.

“It is opening an extensive front,” he said. “Just imagine every Israeli in any military base can be a target for groups who are opposed to Israel.” 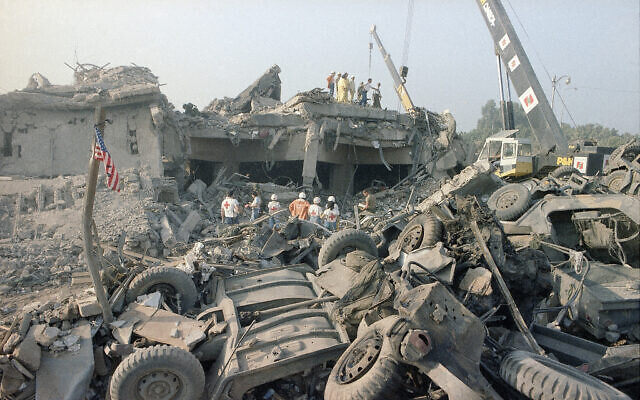 The aftermath of the bombing of the US Marines barracks in Beirut, Lebanon, October 23, 1983. (Jim Bourdier/AP)

Dehghan also said Iran continues to seek the expulsion of all American forces from the region as revenge for the US drone strike in Baghdad that killed Guard Gen. Qassem Soleimani, the head of its expeditionary Quds Force in January. That strike saw Iran launch a retaliatory ballistic missile strike on US troops in Iraq that injured dozens and nearly sparked a war.

Iran’s retaliatory strikes were a mere “initial slap,” Dehghan said. And there would be no easy return to negotiations with the US in part due to that, he added.

“We do not seek a situation in which (the other party) buys time to weaken our nation,” he said.