Iranian state television on Wednesday broadcasted images it said showed the MV Saviz on fire in the Red Sea after an attack on the cargo ship, believed to be a base for Iran’s Revolutionary Guard military force.

The short report showed grainy still images of the vessel ablaze with a column of smoke stretching into the sky and said the vessel suffered “minor damage” from an “explosion.”

The report did not say what was the cause of the blast or who was behind it.

Israel is suspected to have carried out the assault, which an American official attributed to a mine attack the previous day by Israeli naval commandos.

Earlier in the day Iran’s foreign ministry confirmed the assault on the MV Saviz, which had been anchored for years in the Red Sea off Yemen.

In a brief report moments ago, #Iran‘s state TV showed images of the #Saviz, an Iranian ship that was hit yesterday in the Red Sea. A smoke column clearly visible.

No comments on the cause of the “explosion” or who is behind it. The ship has reportedly suffered “minor damage”. pic.twitter.com/qTsVpRbwOe

A statement attributed to foreign ministry spokesman Saeed Khatibzadeh described the ship as a commercial vessel and said that there were no casualties.

A US official told The New York Times that Israel notified the US that Israeli forces attacked the ship around 7:30 a.m. local time on Tuesday.

The anonymous US official said Israel called the strike a retaliation, and that the ship had been hit below the waterline.

The IRGC blamed Israel for the attack on social media, The Times said.

The US official said the attack may have been timed to let an American aircraft carrier, the Dwight D. Eisenhower, move away from the area. The carrier was around 200 miles away at the time of the strike, the official said.

Israel has not officially commented on the incident. Quizzed about it Wednesday, Defense Minister Benny Gantz said only “every place we find an operational challenge or operational need, we will continue to act.”

Israel rarely confirms or denies strikes against Iran-linked targets, but sometimes claims credit for attacks that are a direct response to aggression by Iran or its proxies.

The ship’s long presence in the region, repeatedly criticized by Saudi Arabia, has come as the West and United Nations experts say Iran has provided arms and support to Yemen’s Houthi rebels amid that country’s years-long war. Iran denies arming the Houthis, though components found in the rebels’ weaponry link back to Tehran.

Iran previously described the Saviz as aiding in “anti-piracy” efforts in the Red Sea and the Bab el-Mandeb strait, a crucial chokepoint in international shipping.

Iran’s semiofficial Tasnim news agency, believed to be close to the Guard, reported the attack late Tuesday, saying explosives planted on the hull of the Saviz exploded. It did not blame anyone for the attack and said Iranian officials likely would offer more information in the coming days.

The Saviz, owned by the state-linked Islamic Republic of Iran Shipping Lines, came to the Red Sea in late 2016, according to ship-tracking data. In the years since, it has drifted off the Dahlak archipelago, a chain of islands off the coast of the nearby African nation of Eritrea in the Red Sea. It likely received supply replenishments and switched crew via passing Iranian vessels using the waterway.

Briefing materials from the Saudi military earlier obtained by the AP showed men on the vessel dressed in camouflage, military-style fatigues, as well as small boats capable of ferrying cargo to the Yemeni coast. That briefing material also included pictures showing a variety of antennas on the vessel that the Saudi government described as unusual for a commercial cargo ship, suggesting it conducted electronic surveillance. Other images showed the ship had mounts for .50-caliber machine guns.

The Washington Institute for Near-East Policy has called the Saviz an “Iranian mothership” in the region, similarly describing it as an intelligence-gathering base and an armory for the Guard. Policy papers from the institute don’t explain how they came to that conclusion, though its analysts routinely have access to Gulf and Israeli military sources. 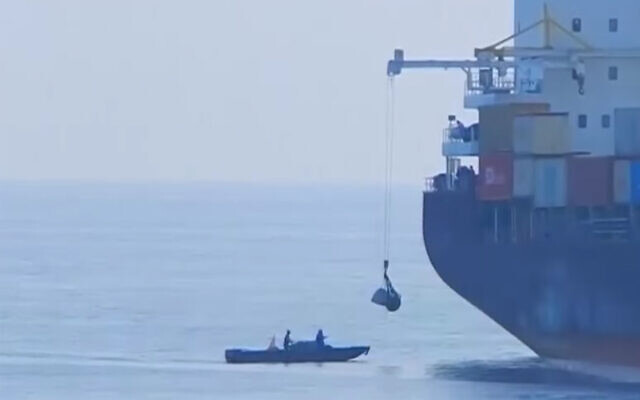 A suspicious boat off the stern of the Iranian ship ‘Saviz’ in the Red Sea in 2018. (Al Arabiya video screenshot)

On February 26, a blast struck the Israeli-owned MV Helios Ray, a Bahamian-flagged cargo ship, in the Gulf of Oman. Netanyahu accused Iran of attacking the ship. Iran swiftly denied the charge, but experts say the attack bears hallmarks of previous attacks ascribed to Tehran.

The operation seemed to have been carefully planned, and mirrored a series of attacks on tankers in 2019 and an Iranian campaign against shipping vessels four decades ago.